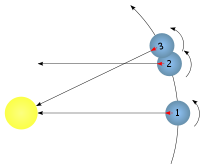 The sidereal day ( Latin sidus ' star ', genitive sideris ) is the period of time between two successive culminations of a fictional, infinitely distant fixed star without its own movement . The sidereal day is the duration of a full revolution of a celestial body around itself in relation to the solid star sky .

Comparison with other day definitions

The mean sidereal day on earth is almost 4 minutes shorter than the solar day or its mean value, the civil day , which is based on the apparent orbit of the sun ( synodic period ). This is due to the fact that the earth continues to run on its orbit between two solar culminations and therefore has to turn around 1 ⁄ 365 of a turn ≈ 0.986 ° further than for a sidereal day (see illustration). An earth year therefore has - reasonably accurate - one sidereal day more than civil days. This difference, spread over the days of the year, results in the stated value of just under 4 minutes per day.

The sidereal day relates - compared to the fundamental system of astrometry - to a coordinate system that is much more stable than the solar day with regard to the annual orbit of the earth around the sun : through a suitable choice of reference stars , it can be applied to a maximum of the inaccuracies caused by the sun's orbit around the galactic Subject to center . It therefore represents - almost - exclusively the rotation of the earth. Therefore, the sidereal day is used to measure astronomical events .

The rotation speed of the earth is extremely stable compared to the other periods and subject to only minimal fluctuations, both because a top rotates very evenly in principle , and because the moon also stabilizes the earth's axis (see earth-moon system ).

An astronomically measured day like the sidereal day is nevertheless not constant: