The British territory in the Indian Ocean (English: British Indian Ocean Territory ) is a British overseas territory , which only the day Chagos Archipelago covers. 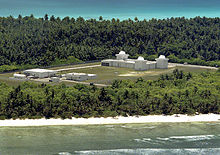 The archipelago consists of seven atolls with around 60 mostly uninhabited small islands. It is located at 6 ° 0 '  S , 71 ° 30'  O coordinates: 6 ° 0 '  S , 71 ° 30'  O . The largest island is Diego Garcia in the atoll of the same name. The other atolls are the Great Chagos Bank , the largest atoll complex on earth (with Nelsons Island , Danger Island , Eagle Islands and Three Brothers ), Peros Banhos , the Salomon Islands , the Egmont Islands as well as the Blenheim Reef and the Speakers Bank , the only reach the surface of the water when the water level is low and have no islands. -6 71.5

The Chagos Archipelago, which is part of the territory, is one of the best protected tropical island systems. The islands are home to many species, especially sea birds. The islands have ten Important Bird Areas (IBA), including the Barton Point Reserve on Diego Garcia, which is home to the world's largest population of red-footed boobies ( Sula sula ).

Flag of the Chagossians

The inhabitants of the islands, the Îlois or Chagossians , were forcibly resettled from 1966 and have lived in Mauritius , the Seychelles and Great Britain ever since . The islands are now uninhabited except for a military base on Diego Garcia Island, which Great Britain operates jointly with the USA .

The archipelago has been under British sovereignty since 1814 .

After the Seychelles gained independence from Mauritius in 1965, the atolls Aldabra , Farquhar and Desroches were split off from the Crown Colony of Seychelles and combined with the Chagos Archipelago to form British territory in the Indian Ocean . In 1976, after the Seychelles gained independence, Aldabra, Farquhar and Desroches were returned, leaving only the Chagos Archipelago in the territory.

In 1966 Great Britain acquired the privately owned copra plantations and leased the entire archipelago to the USA for fifty years; as a result, the approximately 1200 inhabitants were forcibly relocated to Mauritius and the Seychelles. In 1971 the Americans established a military base on the largest island, Diego Garcia, which was declared a restricted area.

Of the seven atolls in the archipelago, only the Solomon Islands , located in the north at a latitude of 5.3 degrees south, may be visited. This atoll consists of eleven small islands, of which Boddam is the largest at 2200 × 500 meters. Around 400 locals lived here until 1965.

The former islanders are still fighting for their right to return before British courts. In 1998 the Îlois brought an action for compensation and the right of return in a UK court. In 2000, the High Court of Justice declared the deportations illegal and granted the deportees the right to return, but this had no consequences. In 2004, Queen Elizabeth II issued an Order-in-Council on behalf of the government , banishing the Chagossians from their homeland. In May 2006, the High Court of Justice declared this 2004 order-in-council to be illegal. This in turn was challenged by the government and referred to the Court of Appeal . In May 2007 the Court of Appeal ruled in favor of the Îlois. The British government appealed the judgment again. On October 22, 2008, the House of Lords agreed with the British government and forbade the residents to return to the island. Against this, an action was brought before the European Court of Human Rights . At the end of 2012, the European Court of Human Rights ruled that it had no jurisdiction over the Chagossian case. In early 2013, the Chagossians filed a lawsuit against the United Kingdom with the Permanent Court of Arbitration in The Hague.

In April 2006 a group of 100 Chagossians were able to visit the Chagos Archipelago at the expense of the British Foreign Office .

The lease agreement with the USA for the Chagos Archipelago was extended from 2016 to 2036 inclusive.

Mauritius has made territorial claims over the entire territory to this day. On June 23, 2017, the General Assembly of the United Nations decided by 94 to 15 votes to refer the case to the International Court of Justice in The Hague. As it became known on February 25, 2019, the International Court of Justice ruled in a non-binding opinion under international law that British rule was illegal and that the lawful administrator was Mauritius. According to Abdulqawi Ahmed Yusuf , President of the Court, it is Britain's duty to withdraw from the island as soon as possible.

The territory is surrounded by a Commissioner (Commissioner) and an administrator (Administrator) in the Ministry of Foreign Affairs manages the United Kingdom in London. Since the population consists only of the UK and US military , there are no elections or civil administration on the islands.

The largest atoll in terms of land area, Diego Garcia, is leased to the United States until 2036, which uses it exclusively for military and secret service purposes. Since almost only the US military is stationed, the US dollar is used as the currency. Stamps are still issued in British pounds .

Although the territory is practically just one military base, it appeared on the official East Timor trade balance in 2008 and 2009 as the ninth largest destination for East Timorese exports. In 2009, the Southeast Asian state exported 249.6 tons of coffee worth $ 142,320 to the British Indian Ocean Territory.