The capital of the Turkish Republic of Northern Cyprus is North Nicosia (Turkish Lefkoşa ).

Cyprus is the most easterly of the larger islands in the Mediterranean . In total it has an area of ​​9251 km², of which 3355 km² are in Northern Cyprus. The distance to Turkey is around 75 km and to Syria around 95 km.

The otherwise rugged chain of the Kyrenia Mountains (Turkish: Beşparmak) sloping down towards the coast runs through Cyprus in a west-east direction parallel to the north coast. The coast is made up of partly extensive sand and gravel beaches as well as steep rocky coasts, lined with small bays.

The population consists, on the one hand, of Cypriot Turks who were settled on the island from 1570/71 and, as a result of the Cyprus conflict, largely had to leave their hometowns in the south of the island and relocate to the north of the island, and on the other hand, after the occupation of Northern Cyprus by the Turkish army in 1974 and the division of the island from mainland Turkey and mainly Turks immigrated from Anatolia . The presence of the Turkish army and the promotion of the settlement of mainland Turks are criticized by the international community and are illegal under international law.

At the 2006 census there were de facto 265,100, de jure 256,644 inhabitants, of which 178,031 citizens and 78,613 foreigners, lived in the Turkish Republic of Northern Cyprus. Among the foreigners, Turks who lived as employees, workers or students at one of the six universities there made up the largest proportion with 70,525 inhabitants. The 2014 census showed a de facto population of 313,626 residents.

The Greek Cypriots who lived in the north before the island was divided in 1974 were largely expelled and now mostly live in the south of the island. Smaller minorities on the Karpas peninsula in the north-east of the island are mainly Cypriot Greeks who remained in Dipkarpaz and Syrian-Aramaic Maronites .

Church, mosque and equestrian statue of Ataturk in Dipkarpaz

The school system in the TRNC can be divided into four sections:

Between 2014 and 2015 around 70,000 students were enrolled in universities in the Turkish Republic of Northern Cyprus.

→ Main articles : History of Cyprus  and the Cyprus conflict

On August 16, 1960, Cyprus gained independence on the basis of the Zurich and London Agreement between Great Britain, Greece, Turkey and the representatives of the Greek and Turkish ethnic groups of Cyprus (1959), although Great Britain retained the military bases Akrotiri and Dhekelia . The Greek and Turkish speaking ethnic groups should have equal rights. In the constitution, the Turkish ethnic group was granted permanent representation rights. In particular, the Vice-President, who should always be appointed by the Cypriot Turkish side, was granted extensive veto rights. Britain, Greece and Turkey were to act as guarantee powers under the London Guarantee Treaty of 1959 .

After the Greek Cypriot side tried to amend the constitution to revoke the veto rights of the (Greek Cyprus) president and the (Cyprus Turkish) vice president, an armed conflict broke out between the Cypriot Turks and the Greek Cypriots in 1963/1964, which was only ended with the intervention of UN troops . As a result, there was increasing spatial segregation of the two ethnic groups. The majority of the Cypriot Turkish population lived in enclaves. Politically, Greek Cypriot nationalists wanted to join Cyprus with Greece ( Enosis ), while Turkish Cypriot nationalists wanted to divide the island into two parts ( Taksim ). 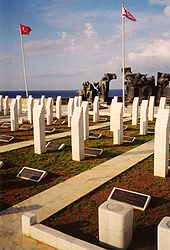 On July 15, 1974, the military junta in Greece supported an attempted coup by Greek Cypriot officers against President Makarios . This coup aimed to annex Cyprus to Greece. Turkey took this as an opportunity to intervene militarily , citing the London Guarantee Treaty of 1959 : Turkish armed forces occupied the north of the island on July 20, 1974 as part of the "Cyprus peace operation" (Kıbrıs Barış Harekâtı). Turkey relied on its status as a guaranteeing power to justify it. 162,000 Cypriot Greeks, who made up 79% of the island's population with a total of 506,000 inhabitants, were expelled from the now occupied part of Cyprus or fled during the occupation, a small minority remained on the Karpas peninsula ( Rizokarpaso ), as did Arabic-speaking Maronites , 1,500 are missing. Then around 48,000 Cypriot Turks, who made up around 19% of the island's population with a total of 118,000 inhabitants, had to leave the south of the island. Your land ownership has been registered to facilitate return on return. According to the Turkish Foreign Ministry, 120,000 Cypriot Greeks and 65,000 Cypriot Turks were affected by the resettlement. According to the European Commission for Human Rights , 196,000 people fled south during the Turkish occupation by August 22, 1974; from there in turn 40,000 Cypriot Turks fled north.

On February 13, 1975, the Turkish Federal State of Cyprus was proclaimed by the Turkish Turkish politician Rauf Denktaş on the 37 percent of the island area that was controlled by the Turkish army , which was to be part of a future Cypriot federal state consisting of two zones. Such a solution was rejected by the Greek Cypriot side and also by the international community.

On November 15, 1983, the parliament of the Turkish Federal State of Cyprus proclaimed independence , citing the right of peoples to self-determination .

On November 18, 1983, the United Nations Security Council declared the Declaration of Independence to be legally invalid, by 13 votes against Pakistan and with Jordan abstaining , as it was incompatible with the Treaty establishing the Republic of Cyprus and the related Guarantee Treaty ( resolution 541 ). Another resolution ( Resolution 550 ) on non-recognition was passed on May 13, 1984, against the vote of Pakistan and with the United States abstaining . Only Turkey accepted the peoples' right to self-determination as the legal basis for the declaration of independence, while the states of the Security Council rejected this mainly for reasons of international law, but also as a violation of the Cyprus resolutions of the General Assembly of the United Nations . The non-aligned saw the declaration of independence as a violation of their own declarations, further concerns related to the fear for world peace. Apart from Turkey, the Turkish Republic of Northern Cyprus is not recognized by any member state of the United Nations .

On April 24, 2004, in a referendum in the Turkish Republic of Northern Cyprus, 65 percent voted in favor of the UN's Annan Plan , which envisages the reunification of the island into a federal state made up of two zones, thus enabling joint entry into the EU; in the southern part of Greece, however, a majority rejected this plan.

After the Republic of Cyprus joined the EU on May 1, 2004, the “Green Line” - the demilitarized zone between the two parts of the country - was not defined as an EU external border. This made it possible for goods and, above all, people, in particular EU citizens, who had come to the island via a port or airport in the north to cross the border from the north to the south for the first time, which the southern part had not tolerated until then had been. The EU thus stuck to its position that, under international law, it assumes the inclusion of the entire island and sees the north as part of the Republic of Cyprus .

Since the proclamation of the Turkish Republic of Northern Cyprus on November 15, 1983, it has regarded itself as a sovereign state , having previously seen itself as a part of a future Cypriot federation since 1975 under the name Turkish Federal State of Cyprus . However, to this day it is only diplomatically recognized by Turkey .

The Turkish army has been present in the Turkish Republic of Northern Cyprus since the military intervention in 1974, with 36,000 soldiers, according to the Austrian Ministry of Defense. In several resolutions ( 541 , 550 , etc.), the United Nations declared the occupation of the northern part of Cyprus to be illegal and condemned Turkey's recognition of the TRNC.

According to the constitution of 1985, the TRNC is a presidential republic. The president is elected directly by the people for a period of five years. Mustafa Akıncı has been the incumbent since April 30, 2015 .

The Assembly of the Republic (Cumhuriyet Meclisi) has 50 seats and is also elected for five years. The strongest party since the election on July 28, 2013 is the Cumhuriyetçi Türk Partisi with 21 seats, which forms the opposition party. The Ulusal Birlik Partisi , which has 18 seats, forms a coalition government with the Democrat Parti , which has 5 seats in parliament. Head of government is Prime Minister Hüseyin Özgürgün , Foreign Minister is Tahsin Ertuğruloğlu .

The Turkish Republic of Northern Cyprus has observer status in the Organization for Islamic Cooperation .

Freedom of the press

In the 2019 press freedom ranking published by Reporters Without Borders , Northern Cyprus ranks 74th out of 180 countries and has improved by six places compared to 2016 and one place compared to 2017.

The Turkish Republic of Northern Cyprus uses the Turkish Lira as its currency . Although the joint introduction of the euro with the Republic of Cyprus failed, the euro is seen as a means of promoting intra-Cypriot trade and reducing dependence on Turkey. With the use of the euro on both sides of the border, the island's economy should find its way more closely to the world market. The euro is seen as an aid to reunification and consolidation of peace. The Cypriot euro coins , which use the Greek and Turkish languages , were designed to avoid an exclusive reference to the southern part of the island. In October 2015, the technical measures for the changeover to the euro began, which was introduced within a year and is used in parallel with the lira.

The Turkish Republic of Northern Cyprus is internationally isolated and cannot take part in international competitions or in world trade. After the Annan Plan referendum, the EU promised to lift the isolation and trade embargo provisions, but little has changed since then. So until today no direct flights to the TRNC are possible; Aircraft are forced to make a stopover in Turkey.

The Turkish Republic of Northern Cyprus has one airport, Ercan Airport . The airports Geçitkale and Pınarbaşı are only served by the Turkish Air Force .

Lefkoşa (North Nicosia) is the largest city within the TRNC area. The city of Nicosia is divided into two parts by a buffer zone established by the UNFICYP soldiers . While the northern part is controlled by the TRNC, the southern part is administered by the Republic of Cyprus. There are around 200 localities in total .

* The date of these holidays results from the Islamic calendar , the corresponding date of the Gregorian calendar is different every year.

Since the Universal Postal Union does not recognize the Republic of Northern Cyprus as a separate state, letters that are addressed to addresses in the TRNC will be returned to the sender as "undeliverable". This problem is circumvented by routing letters to addressees in Northern Cyprus via a postcode in the Turkish port city of Mersin .