from Wikipedia, the free encyclopedia
This is the spotted version , flagged on May 11, 2020 . There are 3 pending changes that have yet to be viewed. 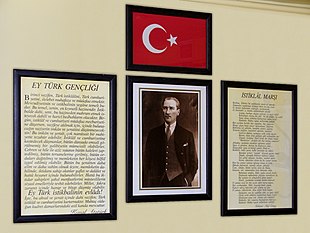 The İstiklâl Marşı ( Ottoman استقلال مارشی , Freedom ' is or, Independence March') since 12. March 1921 , the national anthem of the Republic of Turkey and the international law unrecognized Turkish Republic of Northern Cyprus . Before unification with the Turkish Republic in 1939, the march was also the national anthem of Hatay State , now Turkey's Hatay Province . The text comes from the poet Mehmet Akif Ersoy , the music from Osman Zeki Üngör . Text and music by İstiklâl Marşı were selected in a competition. The Armenian origin Turk Edgar Manas arranged the orchestral version of the anthem.

The independence march was designated as the national anthem on March 12, 1921. Previously, a competition had been held to find the best solution for the National March. The poet Mehmet Akif Ersoy wrote the text. 24 composers took part in another competition to select the music, in which the melody of Ali Rıfat Çağatay won. Eight years later they chose a different melody and have since sung the hymn to a composition by the director of the president's symphony orchestra, Zeki Üngör.

Only the first two stanzas are sung as a hymn. 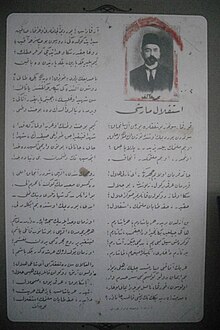 Text of the independence march in Arabic script

Confident, the morning star broke,
In the new light our flag blows ''.
Yes, you should blow,
As long as one last home still stands,
A stove smokes in our fatherland.
You our star, you eternally shining shine,
you are ours, yours we are whole

Do not turn your face from us,
O crescent moon, accustomed to victory for ever, seem
friendly to us
And give us peace and happiness,
the heroic people who consecrated their blood to you.
Preserve our freedom, for whom we glow, the
highest good for the people who will one day set themselves free.

National anthems of the states of Asia