The text is by Andrei Mureșanu and the music by Gheorghe Ucenescu . The text was written and published during the Romanian Revolution of 1848 , originally entitled Un răsunet (An Echo ). The first time the hymn was voiced on July 29, 1848 in the city of Râmnicu Vâlcea . It was immediately accepted as a revolutionary anthem and in Deșteaptă-te, române! ("Awake, Romanian!") Renamed.

Since then, this song has been sung on the occasion of every major conflict in Romania because, according to Romanians , it carries a message of patriotism and freedom. This was also the case during the anti-communist revolution of 1989 , and so the national anthem Trei culori ("three colors") used by the communists was replaced by this one.

From 1989 to 1994 Deșteaptă-te, române! also the national anthem of the Republic of Moldova , which however was replaced in 1994 by Limba Noastră ("Our Language").

Since 1848 Deşteaptă-te, române! the Romanians in difficult times, for example during the War of Independence (1877–1878) and the First and Second World Wars . Especially in the crisis after the coup d'état of August 23, 1944 , when Romania turned against Hitler - Germany and joined the Allies , this song was spontaneously sung and broadcast on the radio.

Immediately after the beginning of the communist dictatorship on December 30, 1947, when King Michael I had to resign, Deşteaptă-te, române! as well as other patriotic marches and songs forbidden. Singing or even humming such a melody could result in prison sentences. Since the 1970s , the song could be sung again, but without the original verses. 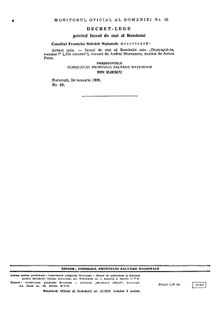 The song was sung in November 1987 during protests in Brașov . In the early morning of December 17, 1989, after a vigil in front of the house of the dissident Hungarian priest László Tőkés in Timişoara , Romanians and Hungarians sang the hymn together and then called for the end of Ceauşescu and communism. Five days later, on December 22nd, 1989, the anthem resounded from the streets of Romania in the course of the anti-communist revolution and accompanied the crowds that formed a unit at this historic moment and banished the fear of death with the song. Under pressure from the demonstrators, this song became the national anthem again, initially by decree in January 1990 by the Council of the Front for National Salvation and since 1991 by Article 12 of the Romanian Constitution .

The message of the hymn Deşteaptă-te, române! has both a social and a national dimension. Social, because constant attention is drawn and the transition to a better, freer world is presented as possible. National because it calls for the people to “awaken” and reflect on historical tradition. The “now or never” accompanied the Romanians in historically significant hours, in which a joint effort was necessary. Perhaps because of this, or because of the virtual struggle against a tyrant, against a tyranny (see the national anthem of France: Contre nous de la tyrannie), Deșteaptă-te, române! (În care te-adânciră barbarii de tirani! Into which you were lowered by barbaric tyrants) Nicolae Bălcescu called the “Marseillaise of the Romanians”.

The Romanian national anthem is a characteristic example of nationalist literature in revolutionary Transylvania . It is entirely in the spirit of the historiography of the historical-linguistic Transylvanian School (Rum. Școala Ardeleană ), whose representatives had set themselves the task of proving the idea of ​​the so-called Dako-Romance continuity .

The Roman emperor Trajan, praised in the hymn, was stylized as the ancestor of the Romanian ethnic group living in Transylvania. The hymn also reflects other fundamental characteristics of romantic nationalism : such as the explicitly völkisch-ethnic understanding of the nation ( “Roman blood” ), the latent aggression against the foreigner ( “cruel enemies”, “barbaric tyrants” ) and finally the call for readiness as a citizen to die for the national collective ( “Better to die gloriously in battle” ). On the other hand, the non-specific opponent or adversary that can be guessed at in the hymn is, literally, a tyrant who should be confronted, an injustice ruler. "Deșteaptă-te, române", like several national anthems, is a courageous appeal against any dictatorship and for freedom.

Modern history emphasizes the constructed nature of nations, which are a hallmark of cultural modernity . The assertion of a millennia-old continuity of the nation - as suggested here in the hymn - would be rejected as a national myth . However, national myths or hymns, which are also used in other countries such as Italy , France , Ireland , Poland or Turkey , have in their history the national movement closely related to the revolutionary striving for freedom and independence and the liberation struggle against the common enemy , against foreign oppressors, have such motives, a position similar to that in Romania. These texts are still very popular today as national symbols, although by today's ethical standards they would be considered bellicose, glorifying violence or xenophobic.

In addition to the official anthem, the Romanians also have the Hora Unirii ("Dance of Union"), which was written by Vasile Alecsandri (1821–1890) in 1855 and sung on the occasion of the Unification of the Principalities in 1859 and is still sung when the Romanians Want to express unity and harmony of their people. The Hora Unirii involves all those present in a round , which is danced slowly but vigorously and is accompanied by traditional music. The Ronde ( Hora ) is itself an old ritual and symbolizes the spirit of unity and equality and expresses the Romanian desire for a corresponding sense of community and coexistence.

The national anthem of Romania has a total of eleven stanzas, but only four of them are sung on official occasions.

Wake Romanians out of your sleep of death,
in which barbaric tyrants have sunk you!
Now or never, weave another fate for you,
to which your cruel enemies will bow down!

Now or never, let's send evidence to the world,
That Roman blood still flows in these veins ,
That we always proudly bear a name in our hearts,
The winner of his battles, the name of Trajan !

Look, sublime shadows, Michael , Stefan , Corvin ,
The Romanian Nation, your great-grandchildren,
With armed arms, your fire in your veins,
"Life in freedom, or death!", Everyone shouts.

Priest, go ahead, with the crosses, because the army is Christian ,
The motto is freedom and the purpose is sacred,
Better to die gloriously in battle than to
be slaves again on our old soil! 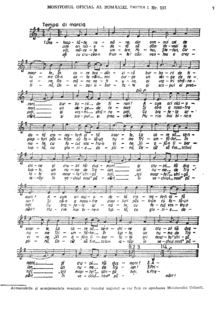