The song Lijepa naša domovino ("Our beautiful homeland"), or Lijepa naša ("Our beautiful one") for short , has been the national anthem of the Republic of Croatia since 1990 . Before that it was the official anthem of the Independent State of Croatia (1941–1945) and the Socialist Republic of Croatia (1972–1990). Originating from the poem Horvatska domovina (“Croatian homeland”) published in 1835 and set to music in 1846 , the song was referred to as “the Croatian hymn” as early as 1891 and was also played as such on official occasions.

The official national anthem currently includes the four verses 1, 2, 13 and 14 of the original text. Usually only the first and last verse are sung. When singing the hymn, the right hand is usually placed on the heart. 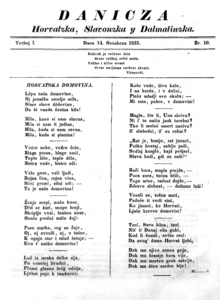 First publication of the original text on March 14, 1835.

The text comes from the writer and poet Antun Mihanović (1796–1861), a supporter of the Illyrian movement , whose aim was the unification of all Croatian territories. The first publication took place on March 14, 1835 under the title Horvatska domovina ("Croatian homeland") in number 10 of the literary magazine Danica ("Morning Star") and comprised seven full and 14 half stanzas in the original. 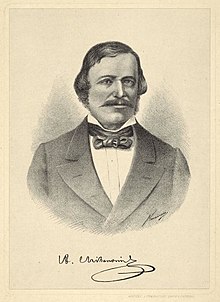 Antun Mihanović , the poet of the hymn

For historical and political reasons the text was edited several times, especially the third stanza.

In the version that is still valid today, reference is made explicitly to the territorial scope of the triune kingdom of Croatia , Dalmatia and Slavonia by inserting the sea ( more ) and the Drava . The Croatian love is now for his nation ( narod ), the song explicitly becomes the national anthem:

Finally, a third version of this verse, which exists under the Ustascha was used regime. In this, the Drina is also mentioned in order to underpin the territorial claim to the whole of Bosnia-Herzegovina ("Croatia to the Drina"):

The text is said to have been set to music by Josip Runjanin (1821–1878) in 1846 . At that time he was serving as a 25-year-old cadet in the 10th Royal Croatian Border Infantry Regiment in Glina on the border with Ottoman Bosnia . He was a military musician and a freelance composer.

The original score has been lost, so that Runjanin's authorship is repeatedly doubted by historians and musicologists. The musicologist and historian Andrija Tomašek is of the opinion that Runjanin is not the composer.

The music lecturer Vatroslav Lichtenegger (1809-1885) created a manuscript for the notation in 1861 after students had auditioned the song. He published the song a year later, harmonized as an arrangement for a four-part male choir in the choir collection Sbirka različitih četveropjevah mužkoga bora - svezak II, broj 9 ("Collection of various four-part songs for male choir - Volume II, No. 9").

It was then published in various other music collections under the original title Horvatska domovina , until it was published in 1864 under the short name Lijepa naša in a collection of several four-part songs published by the Zagreb Music Society of Religious Youngsters.

The current hymn title Lijepa naša domovino came into use in the late 19th century .

Even in the Austro-Hungarian period, the song was considered a kind of Croatian national anthem and was sung on festive occasions. However, it was only one of several “national anthems”.

Memorial to the 100th anniversary of the premiere on the road between Klanjec and Kumrovec .

At the patriotic rallies for the anniversary exhibition of the Croatian-Slavonian Economic Society from August 15 to October 14, 1891, the performance of the song sparked spontaneous storms of enthusiasm. That year it was referred to as "the Croatian anthem". In the following years it became the unofficial national anthem and was sung directly after the imperial anthem .

In 1907, the Association of Croatian Choral Societies submitted a petition to the Croatian Parliament to recognize the song as the official anthem.

When Croatia proclaimed its independence from Austria-Hungary at the end of World War I on October 29, 1918, the song was played in the Croatian parliament.

The song was also used as an unofficial national anthem in the interwar period, although the traditional national songs of Serbia, Croatia and Slovenia had been combined to form a state song for the Kingdom of Yugoslavia .

During the Second World War , the song was the national anthem of the Independent State of Croatia and was sung by both the fascist Ustasha and the communist partisans .

After the war it was forbidden to sing the song in communist Yugoslavia . On February 29, 1972, it was elevated to the hymn of the Socialist Republic of Croatia by constitutional amendment . 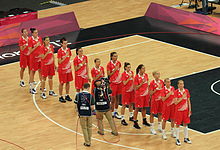 After Croatia's declaration of independence, the song was given the title of national anthem with the country's first constitution on December 21, 1990.