The title of this article is ambiguous. Further meanings are listed under Drina (disambiguation) .

The Drina in Zvornik

The Drina ( Serbian - Cyrillic Дрина , pronunciation: [ˈdrîːna] ) is a right and largest tributary of the Save , which drains over the Danube into the Black Sea . For a large part of its course it forms the border between Bosnia and Herzegovina and Serbia . Together with the Tara , one of the two source rivers, the Drina is 486 km long and has a catchment area of ​​19,926 km². As the most water-rich river in the Dinaric Mountains , it also forms its most important hydrological system. Due to the high gradient and the numerous narrow stretches, the Drina and its tributaries are of great hydroenergetic importance.

The Tara, one of the two source rivers of the Drina

The Piva, the second source river of the Drina

Lower Drina from the Tara Mountains to the mouth of the Sava, Landsat 7 ETM + scene

The Drina rises with its source rivers Tara and Piva in the high karst zone of the Central Dinarides and drains to the Black Sea. The source rivers run along the tectonic structure of the high karst niche in a north-northwest strike direction. The massive limestones of the Hochdinarides, which are difficult to erode, almost only resulted in impassable, deep canyon valleys with narrow bottoms. Therefore, there are hardly any settlements on the rivers here, and the Piva and Tara valleys were only made accessible by the railway crossing the high Dinaride zone of difficult-to-pass Montenegro using the Belgrade – Bar railway line and modern road connections. From the confluence of the Piva and Tara at Šćepan Polje / Hum , the Drina valley runs as a typical breakthrough valley, which with several large abrupt changes in course (including the Drina knee with the now flooded Drina gorge between the Javor (Zlovrh, 1526 m) and Zvijezda mountains (Veliki stolac , 1673 m)), which flows through the Bosnian-West Serbian mountains.

A predominantly simple geological structure prevails in the catchment area of ​​the Drina, which covers almost 20,000 km². In the upper reaches, dolomites from the Middle and Upper Cretaceous , limestones and clastic sediments predominate . The catchment area of ​​the Sutjeska is formed by throwing layers . The middle course between Foča and Goražde is determined by clastic sediments , phyllites , limestone and slate of the Paleozoic Era . The lower course is made up of Neogene sediments. Alluvial alluvial sand and looseness accompany the Drina valley, especially in the lower reaches, gravel banks are numerous on the upper, middle and lower reaches.

The drainage regime of the Drina is one of the typical nivo-pluvial regimes (snow-rain regimes) with a primary high water level in April and a secondary one in December. Since the main part of the course runs through mountains, the upper course entirely in the high mountains of the Dinarides , the source rivers of the Drina are rich in water due to the snowmelt and abundance of precipitation, show high gradients and accordingly they are also characterized by high discharge coefficients. The gradient reaches almost 2000 m over a length of about 500 km (source at approx. 2000 m altitude, mouth at approx. 80 m). In addition to Tara and Piva , the Lim is the most important tributary. Taken together, the catchment area is 19,926 km² (5963 km² of which are accounted for by the Lim, 1853 km² by the Tara and 1602 km² by the Piva).

The Drina Canyon near Višegrad

With an average flow rate of 395 m³ / s at the mouth, the Drina is the most water-rich tributary of the Sava.

The Drina was known for extreme floods before several weirs were built. On March 27, 1896, after the coincidence of heavy rains with the snowmelt, 9500 m³ / s (for comparison: normal discharge of the Danube near Belgrade: 5600 m³ / s) water flowed off the middle course of the Drina and destroyed several villages. At 16 m, the high water mark reached a magnitude that is rarely measured outside the tropics. Due to the flood, for example, the bridge in Višegrad could no longer be seen in the water.

From the confluence of the two source rivers to their mouth, the actual Drina is 346 km long. Important cities on the Drina are Foča , Goražde , Višegrad and Zvornik in Bosnia, and Bajina Bašta and Loznica in Serbia. The river is also called Zelenka ("the green") because of its greenish shimmering water, which is due to the high lime content .

Especially in its upper reaches, the Drina flows strongly meandering through gorges and narrow mountain valleys, which is why it is considered one of the most beautiful rivers in the Balkans .

The two headwaters of the Drina, Piva and Tara , flow in northwestern Montenegro . The 141 km long Tara rises in Komovi, a mountain of the Prokletije , at an altitude of about 2000 m. Just like the Tara, the 91 km long Piva , which rises in the Morača Mountains, is a typical karst river with a few tributaries that have eroded steep canyons into the karst highlands of northern Montenegros .

The upper course with the source rivers of the Tara and Lim occupies the central high mountain region of the Durmitor in northern Montenegro and is part of the Dinaric high karst zone . This strong karst region is characterized by inflows to Tara and Piva in deep gorges and ravines zertalt. With 3502 km² the upper reaches 17.6% of the catchment area.

The river bears the name Drina from the confluence of the two source rivers near Šćepan Polje on the Montenegrin-Bosnian border. After the meeting of Tara and Piva, the 92 km long upper course of the actual Drina begins to Višegrad . Above Višegrad, the Drina takes in the water-rich Lim. With an area of ​​10,425 km², the Upper Drina reaches 52.3% of the catchment area.

The 163 km long middle course occupies the now dammed part of the Drina canyon on the Zvijezda and Tara mountains, which is up to 1000 m deep , as well as the Drina valley between Višegrad and Zvornik , which is characterized by strong changes in course . The middle reaches with 3866 km² 19.4% of the catchment area.

Behind Zvornik begins the 91 km long lower course, which is characterized by the expression of all characteristics of a lowland river (meander, oxbow lakes, dam formation, course relocation). The catchment area of ​​the Lower reaches an area of ​​only 2133 km² (10.7%). The mouth of the Drina in the Save is now below Sremska Rača .

The most important tributary of the Drina is the Lim on the right . This rises in the Prokletije and flows in the upper reaches to the lake of Plav . Parts of the Lim spring rivers lie in trough valleys of former Pleistocene valley glaciers (Ropojani and Grbaja). Since the upper reaches of the Drina and in particular the Piva and Tara runs mainly through the Dinaric Karst , smaller tributaries are only characterized by periodic water flow (e.g. the Sušica in the Durmitor and Komarnica). Strong karst springs (e.g. Pivsko oko with 23 m³ / s, formerly the strongest karst spring, which is now flooded by the Piva reservoir) with a short run are therefore typical for this area.

Historically, the Drina ( Latin Drinus ) has long been the natural border between the Western Roman and Eastern Roman Empire , which later became the boundary between the Orthodox and Catholic beliefs. This past, combined with the influence of Islam during the Ottoman rule, has shaped and continues to shape the social conditions along the Drina up to the present. In addition to many centuries of multicultural coexistence and coexistence, there were also frequent armed conflicts. During the First World War in 1914, for example, the Battle of the Drina between the Austro-Hungarian and Serbian troops took place here. During the Bosnian War from 1992 to 1995, the cities of Srebrenica , Žepa and Goražde, defined as UN protection zones and previously inhabited by Muslims , gained notoriety. 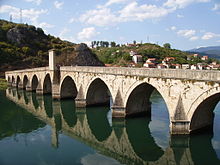 The Mehmed Paša Sokolović Bridge over the Drina in Višegrad.

In his work The Bridge over the Drina (originally Na Drini ćuprija ) the writer and Nobel Prize winner Ivo Andrić , who grew up in Višegrad, created an artistic monument to the river, the city and its country.

The Drina river house on a natural river island has existed near Bajina Bašta since 1968 .

In the first days of December 2010, the Drina, Lim and other tributaries experienced their highest flood in more than a hundred years after heavy continuous rain. Numerous places, including Foča , Goražde , Višegrad , Bratunac , Zvornik and districts of Bijeljina , were largely under water. Several thousand residents had to be evacuated. 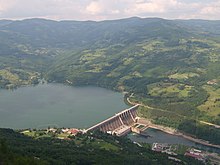 The Drina is the most important river in the Western Balkans for electricity generation. Several reservoirs and hydropower plants can be found on the central reaches of the Drina. In addition, the Piva is also dammed. Plans to build up the Tara as well have so far failed due to popular resistance.

Between Višegrad and Peručac , the water of the Drina flows about 50 km in length through the reservoir called Perućačko Jezero . The height of the dam at Perućac is 93 m. Further north it flows through the Zvorniksee , whose dam stands south of the eponymous city.

In the upper reaches of the Drina there are some antimony deposits that have been developed since ancient times and are therefore best known in western Serbia near the Bosnian border. The antimony ore area of ​​Zajaca-Kostajnik near Loznica is located in an area made up of Permocarbonic schists and limestone from the Triassic , which is severely disturbed and has breakthroughs of young tertiary trachytes and andesites in numerous places . The silver ore deposits of Srebrenica in Bosnia were among the largest in Europe in the Middle Ages, but are now exhausted.