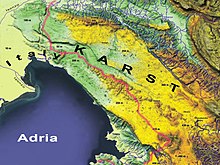 Geological map of the mountains and the type locality "Karst".

Location of the karst area in Slovenia

Gorge of the Reka River in the Karst Plateau

The Karst (from Slovenian kras , Croatian krš and Serbian крш , which means "stony and barren soil") is a landscape in Slovenia (historical Carniola landscape ) on the border with Italy (hinterland of the Trieste Bay). It is the northern tip of the Dinaric Alps . The landscape gives its name to the geological phenomenon karst , which was first thoroughly researched here by scientists of the Habsburg monarchy. Since these were published in German, the German name Karst has prevailed internationally against the Slovenian and Croatian kras and the Italian carso . All these similar names come from the Latin carsus with the word root * kar- meaning stone, rock.

Landscape in the Karst near .Doberdò del Lago

The Karst is a limestone plateau built in the center from Cretaceous limestone , from the Aptian to the Maastrichtian to the edges of the Tertiary ( Palaeogene , to the Eocene ). It extends parallel to the Adriatic in a north-west-south-east direction ("Dinaric"). With the exception of the south-east side, it is surrounded by landscapes, the subsoil of which is formed from the younger, more easily weatherable claystones of the flysch . The border of the karst plateau in the southeast is the low coastal strip formed from flysch underground to the Bay of Trieste. In the northwest the fertile alluvial land borders the Isonzo / Soča valley . The western edge of the plateau and the valley are on Italian territory. To the north and northeast is the valley of the Vipava River . The higher hill country in the flysch to the south separates it from the Pivka region. The hill country on the Reka and its river valley as part of the Brkini hill country border in the southeast. While the plateau is clearly delimited in these directions by the geological boundary to the flysch and the associated elevation, in the south-east it passes into the adjoining Ćićarija karst area without a clear boundary ; the karst hills ultimately continue in Velebit as part of the Dinaric Mountains . The plateau is about 40 kilometers long and 13 kilometers wide, it occupies an area of ​​about 440 square kilometers. Its greatest height, in the southeast, reaches about 450 meters. It drops to the northwest, the last foothills still reach a height of 168 m.

Despite its low altitude, the plateau stands out from the surrounding landscape. The river valleys and hill countries in the flysch belt are green, densely populated and relatively water-rich landscapes with intensive agriculture. In the Karst it is predominantly the partially bizarrely weathered, bare limestone that forms the surface, which is exposed unprotected to the strong north wind ( bora ). The formerly existing forest was probably already lost in prehistoric times due to human influences, and the unprotected soil was removed. There is no water due to the underground drainage. The hill country was therefore a striking obstacle to traffic even in historical times, despite its low height. The sparse human habitation is tied to drainless depressions in sinkholes , in which the eroded soil, a terra rossa , of the slopes was washed together. There are no larger valleys or karst plains ( polje ). In some cases, gardens or tree plantings are protected against further erosion and against the wind, and in the past at the same time against damage from grazing cattle, by mighty dry stone walls.

The Reka river has its source on Snežnik ( Carniolan Snow Mountain ) about 50 kilometers from the Karst plateau. It runs through the hilly landscape of Brkini in the flysch towards the plateau. At the geological boundary between Flysch and Karst near the village of Brenski Britof, it begins to cut a two-kilometer-long, deep gorge into the limestone, and finally disappears underground in the Škocjan Caves , at an altitude of 323 meters above sea level . On the west side of the plateau, near the village of San Giovanni al Timavo , the water comes out again in three large karst springs (the Foci del Timavo) and forms the Timavo river , which flows into the Adriatic after just two kilometers. On the surface, the subterranean river is partially traced by a series of impressive sinkholes. The large, 116-meter-deep Velike Doline (“large sinkhole”) collapse doline shows a large waterfall that flows into a cave lake. The course of the cave river has only been explored for the first few kilometers, but the connection with the karst springs has been reliably proven by marking experiments. It is assumed, however, that the underground water system is in contact with others and that there are both inflows and outflows to others.

Descriptions of the karst springs of Timavo are already available from antiquity, for example in the periplus of the " Pseudo-Skylax " (an unknown author who published under the name of the Skylax of Karyanda), from the fourth century BC. Poseidonios of Apamea later mentions the Škocjan caves in addition to these. In the Aeneid of Virgil the springs are called "Mother of the Sea". They are recorded in the Tabula Peutingeriana , the medieval copy of a Roman map. These are the oldest geographical indications from the region. The plateau itself is only mentioned with the beginning of exploration in modern times.

The Italian part of the landscape also gave the name Carso to the wine of the same name. During the Isonzo battles of the First World War , the Karst was the immediate frontline area.