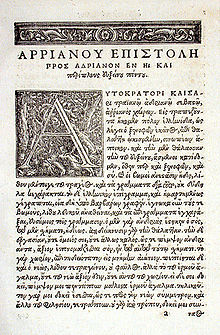 In one sense, periplus is a written navigational aid in ancient times. Such “books” contained a description of the sea route, which enabled orientation in foreign waters. The essential thing was an ordered list or catalog of the ports and landmarks on a coastline with the approximate distances to each other.

Based on this meaning, trip or travel descriptions also bear the name Periplus, for example the Carthaginian Periplus of Hanno the Navigator , also Periplus Hannonis , from the 5th century BC. BC, the periplus of Skylax from the late 4th century BC. BC, the description of the trade route Periplus Maris Erythraei (a manual for the import and export of goods from East Africa to India written in Greek by a seafarer from Alexandria around the middle of the 1st century ) or the Periplus Arrians in the Black Sea area .

The Peripli formed the basis for the later development of the Portolano .

In another meaning, Periplus stands for a special tactic in ancient naval warfare, namely bypassing enemy ships. Thematically related to Periplus is the stadiasmos , latinized stadiasm , in antiquity a "mile guide" in book form or as a stone column.