The national parks of the Bialowiezer Heide are divided between the Polish Podlaskie Voivodeship and the Belarusian Woblasze Brest and Hrodna . They are located 250 km east of Warsaw and 340 km southwest of Minsk . The Bialowiezer Heide is part of the Central European lowlands in the eastern area of ​​the Vistula basin and extends at an altitude between 145 and 202 meters. In the vicinity of the border between Poland and Belarus, the watershed between the Baltic Sea and the Black Sea stretches along. The rivers Hwoźna, Leśna Prawa / Prawaja Ljasnaja , Bielaja, Łutownia and Narewka run through the areas of the national parks. They flow into either the Narew , which flows north, or the Prawaja Ljasnaja, which flows south. 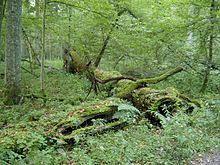 European bison in the national park

The World Natural Heritage and Biosphere Reserve of UNESCO is on the Polish side 200 square kilometers. On the Belarusian side, the biosphere reserve is 1,771 km² in size. The core area is 157 km² with a buffer zone of 714 km² and a transition zone of 900 km². The national park and the world natural heritage are together 876.1 km² in size.

The extensive forest complex of Białowieża, the Białowieża Primeval Forest , extends over a total area of ​​1,500 km² on both sides of the Polish-Belarusian border. About two thirds (874 km²) of the area are on Belarusian and one third (630 km²) on Polish territory. Biogeographically , the region in the Central European lowlands can be assigned to the mixed forest zone. In the north and east in particular, there are close spatial connections to other extensive forest complexes in Poland and Belarus.

The national park spreads on the Polish side over an area of ​​105.17 km². Of this, 47.16 km² are under special protection. This “Strict Protected Area” may only be entered by tourists with guides on fixed routes. Other parts of the forest are researchers and Ä. reserved with special permission. Human interference is only accepted along the tourist routes. But you limit yourself to keeping the paths clear, e.g. B. by removing fallen trees. This is only done manually, i.e. H. without the use of chainsaws and other machines. Further interventions are not carried out even if trees are attacked by pests.

Overview of the flora and fauna

The Białowieża National Park was founded in 1932 as the first national park in Poland. In the village of the same name, Białowieża, he maintains a teaching and information center with a multimedia exhibition on animals and plants in the park. In this forest and heather area, bison can still be found today - a kind of landmark of the area. In February 1921, wild bison were extinct and only 56 specimens remained in zoological gardens. Thanks to the successful breeding, animals could again be released into the wild in the Białowieża Forest from 1956. There is now a reasonably stable population of around 450 animals; however, they are not protected when changing from the Polish to the Belarusian part of the national park. Białowieża also offers a refuge for many other (a total of 12,000), often threatened animal species, such as the black stork or the blue roller . Nine species of woodpecker breed here , u. a. White-backed woodpecker and three-toed woodpecker and spotted eagle and snake eagle , seven species of owls (Domaszewicz 1997), Redwings and Red-breasted Flycatcher .

The biological diversity of the forest is overwhelming, because not only many animal species, but also 3,500 mushroom and 5,500 plant species have been identified so far. One of the first detailed descriptions of the jungle area from a forestry point of view was written by the then Polish general forest master Julius von den Brinken in 1826 under the title Mémoire déscriptif sur la Forêt impériale de Bialowicza en Lithouanie . 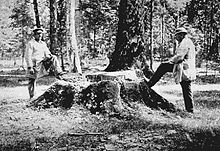 Significance for the preservation of the bison

European bison in the national park

The Białowieża Forest was one of the last refuge areas for the bison at the beginning of modern times. This remote region was already a privileged hunting ground for the Polish kings in the Middle Ages . Wisents were only allowed to be hunted here with special permission from the Polish ruler. From 1795 the area was under strict protection by the Russian tsar . Although the area was used as a Hudewald forest , poaching was punishable by death and from 1803 logging was prohibited in large parts of the forest. From 1832 the bison population was counted annually. It reached its maximum in 1857 with 1,900 bison. Thereafter, two epidemics in 1890 and 1910 caused a decline in the population. At the beginning of 1915 there were still about 770 bison living in this area. In autumn 1917 there were only 150 animals left. In the turmoil immediately after the end of the First World War , most animals fell victim to marauding soldiers and poachers. On April 4, 1919, the remains of a poached bison and tracks from another four bison were found. On February 9, 1921, the former forester Bartolomeus Szpakowicz gunned down the last bison living in the wild. The importance of the Białowieża Forest lies not only in its centuries-long function as one of the last refuge areas of its kind. During the 19th century, bison were repeatedly caught from this area and given away to zoos and enclosures. These stocks were accessed when efforts to conserve the species began in the 1920s. The so-called Pleß line , for example, goes back to a bull and four cows, which were given as a gift to Hans Heinrich XI in 1865 . von Hochberg , the princes of Pless , were brought from the primeval forest of Białowieża to the Pless forests in Upper Silesia . They were bred there in isolation for a few decades. The bull Plisch with the stud book number 229, which was brought back to Białowieża from Pleß in 1936, is of great importance in today's conservation breeding. Almost all of the bison of the lowland line currently living in the Białowieża jungle are descended from him.