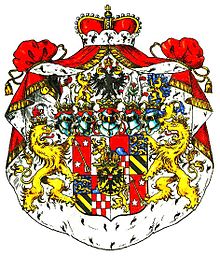 Coat of arms of the Prince of Pless, Count of Hochberg, Baron of Fürstenstein

The Silesian Principality of Plesse (Polish Księstwo Pszczyńskie , Czech Pštinsko , also Pštinské panství ) was located in the Beskid foreland in the Plesse ( Pszczynka ), a tributary of the Vistula . It existed from 1412 to 1918, since 1452 as a free class rule .

A settlement in Altdorf was built around 1200 in the forest of the former "no man's land" between the Wislanen in the east and the Golensizen in the west, later on the border of the castellanias of Cieszyn (Teschen) , Racibórz (Ratibor) and Oświęcim , (Auschwitz) . In the 13th century, Woszczyce belonged to the diocese of Kraków , 16 km to the northwest , while Wisła , 10 km to the southwest, belonged to the Teschener Kastellanei in the Wrocław diocese . The Plesser Land developed in the 13th century in the border area between the part of Malopolska , which was spun off from the Duchy of Krakow in 1177/1179 and came to the Duchy of Ratibor , which was ruled by the Silesian Piasts . The affiliation of the parish first mentioned in 1326 and the dean's office of Pless, which was spun off from Auschwitz in 1350, to the diocese of Kraków (then to the diocese of Breslau, from 1925 to the diocese of Katowice) originated from this time .

The former Piast castle in Pless on a branch of the road from Kraków to Moravia was destroyed in 1263 by the troops of the Bohemian Přemyslid king Ottokar II . Duke Bolko I from the Schweidnitz line of the Silesian Piasts had a castle built in Pless again during his reign (1288–1292).

In 1327, Duke Lestko of Ratibor paid homage to the Bohemian King Wenceslaus II , which made Pless and the Duchy of Ratibor a fief of the Crown of Bohemia . The Bohemian feudal sovereignty was confirmed by the Polish king in 1335 with the Treaty of Trenčín . After the death of Duke Lestko in 1336, Pless fell together with the Duchy of Ratibor as a settled fiefdom to Bohemia. In 1337 the Bohemian King John of Luxembourg transferred the Duchy of Racibórz as a fief to Nicholas II of Opava , who was married to Lestko's sister Anna and came from the Premyslid line of the Dukes of Opava. His eldest son Johann I received the Duchy of Ratibor as the sole heir in 1365 and founded the Přemyslid family line of Troppau-Ratibor . In 1375 he pledged the Pless land to the Opole duke Wladislaus II. In 1412, Johann II von Troppau-Ratibor lent the entire area of ​​Pless, Altberun, Myslowitz as well as Nikolai and Sohrau to his wife Helena, Princess of Lithuania, for her lifetime as Wittum . This created the Duchy of Pless, headed by Duchess Helena from 1424 until her death in 1449.

After the death of Nikolaus V von Ratibor-Jägerndorf , son of Helena, in 1452, the Pless Land was separated from the Duchy of Ratibor as a Bohemian class rule for Nikolaus' underage sons from his marriage to Barbara Rockenberg († 1464), who was regent until 1462 was her sons. Thereafter, Pless served as a secondary school for the proper care of Bohemian princes, together with the brothers Henry the Elder , Henry the Younger and Viktorin , sons of the Bohemian King George of Podebrady and dukes of Munsterberg . In 1472 the brothers divided their possessions, with Heinrich the Younger receiving Pless, which he later left to his brother Viktorin.

In 1480 Viktorin Pleß sold his son-in-law Casimir II of Teschen , who in 1509 resold parts of the Pless land to the Hungarian magnate and mine owner Thurzó (excluding Strumień , which has since been elevated to a town and remained with the Duchy of Teschen or Teschen Silesia to this day). In 1548 the Thurzó sold the estate of Pleß to the prince-bishop of Breslau Balthasar von Promnitz . This was confirmed to him by the Bohemian and Roman-German King Ferdinand I through an inheritance. This measure should also prevent the spread of the Reformation in this area. The then mostly Polish-speaking rural population professed the Catholic religion.

Dominion in the Kingdom of Prussia 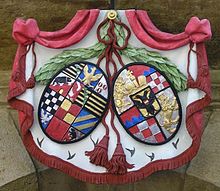 The rulership of Pless remained in the possession of the Prince-Bishop's heirs until 1765, and until 1742 it was under the Crown of Bohemia , which the Habsburgs had held since 1526 . Together with almost all of Silesia, it fell to Prussia after the First Silesian War .

In 1765 Prince Friedrich Erdmann von Anhalt-Köthen received from his uncle, Count Johannes Erdmann von Promnitz, the estate of Pless with three towns and 49 villages, and he accepted the title of Prince of Anhalt-Köthen-Pless. The goods devastated in the Seven Years' War were managed again, the glass and zinc works and the cloth factories in Pless were put back into operation. With Friedrich Erdmann's death in 1797, the rulership fell successively to his childless sons Ferdinand Friedrich , Heinrich and Ludwig . In 1817 King Friedrich Wilhelm III. the Silesian class rule to a Prussian principality.

Counts of Hochberg, princes of Pless 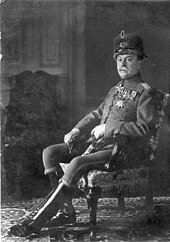 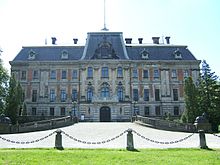 After Heinrich von Anhalt-Köthen, the last of the sons of Friedrich Erdmann von Anhalt-Köthen, died in 1847, the descendants of the eldest daughter Anna Amalia (1770–1830) inherited the civil status. She was with Count Hans Heinrich VI. von Hochberg-Fürstenstein (1768-1833) married, who had administered Pless on behalf of Heinrich since the death of his brother Ludwig († 1841). He was followed by his eldest son, Count Hans Heinrich X. von Hochberg , the first president of the Prussian mansion .

His son Hans Heinrich XI. was the Oberstjägermeister of Kaiser Wilhelm I. He was a member of the Prussian mansion and from 1867 to 1884 a member of the Reich and Free Conservative Party in the Reichstag . In 1890 the prince became a member of the Prussian State Council . In 1905 the emperor made him Duke of Pless for himself . He was the first mining magnate in German heavy industry. The coal mines near Waldenburg (Lower Silesia) brought him high profits. One of his possessions near Freiburg in Silesia was the large castle-like complex of Schloss Fürstenstein with surrounding gardens and terraces. It has been one of the region’s tourist attractions since the mid-19th century and was accordingly often depicted in vedout graphics and on bathing glasses and porcelain. The Duke died in 1907 at Albrechtsberg Castle in Dresden.

His son and successor Hans Heinrich XV. was called the richest prince in the German Empire after the Duke's death. Born in Pless in 1861, after completing his university studies he worked in the diplomatic service of the German Empire in London. In 1891 he married the seventeen year old Mary Theresa Olivia Cornwallis-West , called Daisy, one of the most attractive women in London's salons. The family spent the years of their marriage with their three children in Schloss Fürstenstein . She often traveled and organized lavish festivities in Fürstenstein. Before the start of the war, Daisy tried in vain to mediate between the German Emperor and the British King personally in order to bring about peace and was actively involved in German social welfare as a helper. During the First World War she worked as a nurse in the German Red Cross at train stations to look after the troops. Their marriage broke up during the war years. The marriage ended in divorce in 1922. She herself had to leave Fürstenstein Castle and lived with her two younger children in Munich, Berlin and other cities, most recently alone in the Villa Pohl in the Silesian town of Waldenburg, near the former residence.

Although the Principality of Pless fell to Poland when Upper Silesia was partitioned after 1919 as a result of the Versailles Peace Treaty , the property and the castle remained in the possession of the Hochberg-Fürstenstein family until 1945.

In 1922, the Polish military occupied the city of Pless . Hans Heinrich XV. took on Polish citizenship that year, but initially lived in his Lower Silesian residence, Schloss Fürstenstein, and later in Pless. He brought his entire fortune (with the exception of the castles) into two corporations: the Fürstlich Plessische Bergwerks AG in Katowice and the Fürstliche Brauerei AG in Tichau . The companies operated profitably until 1945.

Pless Castle took over in 1938, after the death of Hans Heinrich XV., His second oldest son, Alexander Hochberg , who was a Polish citizen. Whose older brother Hans Heinrich XVII. had already emigrated to Great Britain , where he served in the British Army. The youngest son Bolko had died in 1936 and was buried in Plesser Park.