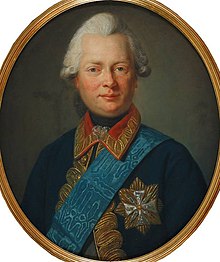 Friedrich Erdmann was the younger son of Prince August Ludwig von Anhalt-Köthen (1697–1755) from his marriage to Emilie (1708–1732), daughter of Count Erdmann II. Von Promnitz . Friedrich Erdmann was initially in the service of the Prussian army in August 1751. In July 1754, as captain of a company in the Prussian infantry regiment von Meyerinck ( No. 26 ), he got into financial difficulties and asked King Friedrich II several times for support from his father. On September 9th, 1755, he sought his departure from the cabinet, had to assure that he would not enter Austrian or imperial services, and received his dimission on October 10th, 1755 . Soon afterwards he switched to French military service. In the latter he participated, u. a. from March 10, 1759 as regiment owner of the Anhalt Infantry Regiment and commander of the Anhalt Brigade in the battle of Minden , on campaigns against Prussia and its allies, and left military service after the Peace of Hubertusburg in 1766. He went on trips to Russia . After the execution of King Louis XVI. he laid down all French military dignity and went back to the Prussian army, where he was lieutenant general from 1797.

In 1765 the estate of Pleß passed to the House of Anhalt-Köthen , which the last Count of Promnitz left to his nephew Friedrich Erdmann in return for a pension, which is why he assumed the title of Prince of Anhalt-Köthen-Pleß. Thus Pleß became a secondary school in Anhalt-Koethen. In 1767 he was officially enfeoffed with Pless by King Friedrich II of Prussia . Under the prince, described as entrepreneurial, industrial rule developed enormously. Friedrich Erdmann asserted his mountain shelf against the Prussian state and led the coal mining to flourish. From 1775 to 1776 he had a two-winged baroque palace built in Tichau .

Friedrich Erdmann settled Seiffersdorff Protestants in his rule in 1779 , to whom he granted many privileges. In the following year, Friedrich Schleiermacher's parents and their son also joined the emigrant colony.

Friedrich Erdmann was a knight of the Polish White Eagle Order . The Plessenburg in the Harz region was named after his reign of Pleß .

On June 13, 1766, Friedrich Erdmann married Countess Louise (1744–1784), daughter of Count Heinrich Ernst zu Stolberg-Wernigerode , at Wernigerode Castle , with whom he had the following children:

The Plessenburg in the county of Wernigerode was named after him.