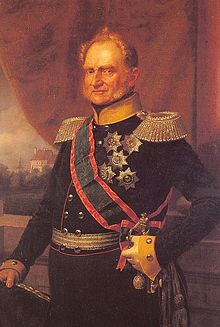 In 1818 Heinrich took over the government in the Upper Silesian class lordship of Pless as Prince of Anhalt-Köthen-Pless . When his brother Ferdinand rose to the throne in the Duchy of Anhalt-Köthen , he gave him the Prussian rule. After the death of the childless Ferdinand in 1830, Heinrich ascended the Koethen throne. He left Pless to his younger brother Ludwig , who died in 1841.

Thanks to Heinrich's efforts, the first railroad reached the city of Köthen in 1840, as the Bernburg Duke Alexander Carl had refused to move the Magdeburg-Leipzig line via Bernburg (Saale) . The "Heinrichsplatz" next to Köthen's earliest train station is a reminder of this.

From 1841 to 1847, Duke Heinrich was also Prince of Pless , and it was here in Upper Silesia that he met the meritorious historian Gottlieb Krause , whom he brought to Köthen in 1842 as the palace librarian and curator of the ducal collections.

With the benevolent reception of the homoeopathic "miracle healer" Arthur Lutze , similar to Samuel Hahnemann , personal physician to his brother and predecessor Duke Ferdinand , Heinrich again drew the world's attention to his small country in 1846 - even after his death, when Lutze in 1855 was an impressive homeopathic one Clinic opened, which every year attracted tens of thousands of patients from all five continents to Koethen.

Duke Heinrich had served in the Prussian army since 1796, in the 1806 campaign as a major, and when he left with the rank of major general. In 1830 he was awarded the Order of the Black Eagle . In the Prussian service again since 1841, he was promoted to General of the Infantry in 1847, the year he died.