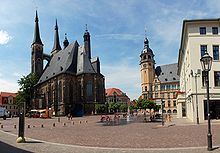 The St. Jakobs Church is the Protestant town church of the city of Köthen (Anhalt) . It is the late Gothic successor to a Romanesque church from the 12th / 13th centuries. Century. In the second half of the 19th century the building was renovated and partially redesigned. The crypt of the church is the burial place of the Princely House of Anhalt-Köthen .

The construction of today's Jakobskirche began around 1400. In 1406, Koethen was besieged and shot at by around 2,000 brushwoods belonging to the Archbishop of Magdeburg, Count Günther II von Schwarzburg . The stone ball walled in in the northern part of the church is intended to remind of one of the storeys used .

Between 1488 and 1513 the nave was vaulted after the lack of funds was raised by "foreign" foundations and loans. By 1514 a church was built that consists of a three-aisled nave and is closed in the east by a short, recessed choir with a 5/8 end .

Originally there was a tower in front of the nave in the west, but it collapsed in 1599. In its place, today's pair of towers - the tallest church towers in Anhalt - was built between 1896 and 1898 under the direction of the architect Bernhard Sehring .

In 1525 the Reformation was introduced in Köthen. The famous reformer Johann Schlaginhaufen (1498–1560) worked here from 1533 until his death . Originally Catholic, then Lutheran, reformed from 1606, St. Jakob always served as the parish church of the township. This led to repeated significant changes, especially to the interior and in particular to the removal of essential parts of the church's medieval furnishings.

In 1672 galleries were added to three sides of the nave for the growing community. In the last major redesign of the church between 1866 and 1869, however, these were removed again. The royal crypt, which still exists today, was rebuilt and stone galleries for the council and the royal house were built in the easternmost yokes of the side aisles. A new sacristy was located under the northern of the two galleries . In addition, the furnishings were supplemented at this time by a new altar, a pulpit and an organ.

The building has largely been preserved in this form to this day.

The St. Jakobs Church in Köthen is essentially divided into three components that can be easily distinguished from the outside.

In the west stands the 75-meter-high pair of towers which, with the anteroom and gallery building between them and the gallery bridge, give the impression of a transom-like western building . It stands out from the rest of the church both formally and stylistically. In contrast to the other outer walls of the church, brick facings were used on the upper floors of the towers and the upper part of the gallery building and very modern shapes were chosen for the decorations for the time.

The nave of the church adjoins the pair of towers , which extends over five bays and is crowned by a high, slate-covered roof. The eastern end is formed by a small, short choir building with a polygonal broken end and a steep roof.

Both roof sections each have a six- or eight-sided roof turret with almost identical curved hoods and a large dwelling on the east side of the choir .

On the southern flank facing the town's market, a flat-roofed extension adorned with a tracery balustrade is added to the nave , which houses the vestibule of the south portal of the church.

All the outer walls of the church are exposed to stone and are only structured by simple buttresses with sparse ashlar decorations , a surrounding cornice under the window sills and the three-lane windows with late Gothic ashlar tracery. 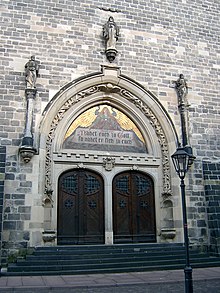 From the west you enter the church through a double portal, where Gothic style quotations and forms of the Art Nouveau , which emerged towards the end of the 19th century, mix. The other two portals are located on the north and south side on the second yoke of the nave.

The interior of the church presents itself as a uniform, three-aisled hall space over five bays. A short, slightly raised choir adjoins this in the east, which has a closure formed from three sides of the octagon. The central nave is about twice as wide as the two side aisles and is separated from them by octagonal pillars that end in capitals . On them rests a the entire interior spanning net vault , which is decorated with large, colorful framed keystones.

In the easternmost yokes of the side aisles there are built-in stone galleries with neo-Gothic architectural decorations. During church services, the prince's house and opposite the city council had their permanent seat on the southern gallery. The sacristy was set up under the northern gallery.

In front of the entrance to the choir, a narrow, steep staircase leads down to the princely crypt. To the north of this the pulpit of the church has received its place of installation on the pillar.

The western end of the hall is formed by a gallery covering the entire width of the interior with a stone tracery parapet. Under the gallery a vestibule leads to the west portal between the towers.

The walls of the interior are whitewashed. The pillars, arcade arches and vault ribs are painted stone gray and red and provided with a white network of joints. During the last renovation, the capitals and corbels of the pillars and wall sections were decorated with gold leaf.

The hereditary burial of the Ascan princes of Anhalt-Köthen is located in the crypt of the Church of St. Jakob . The following members of the family are buried here in some lavishly decorated coffins:

Until 1866 there was an organ by Zacharias Thayßner , which, however, was prone to failure and is said to have been unplayable during Johann Sebastian Bach's time in Köthen (1717–1723), in St. Jakob.

The current organ of the Jakobskirche was built by Friedrich Ladegast (Weißenfels) in the course of the Bach Renaissance in 1872 . The mechanical instrument has 47 stops on three manuals and a pedal and was supplemented by him in 1905 with a Barker machine for the main work. In 1972 three registers were redesigned in Baroque style and this intervention was reversed in 1992. The organ was last extensively restored in 1997.

Brochure of the Ladegast organ from 1872