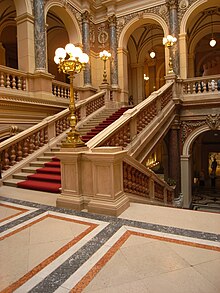 Wooden balustrade in the Notre-Dame church in Yverdon

Natural stone balustrade (limestone) on a facade in Montreux (ca.1900)

A balustrade (from the French word balustrade from the synonymous Italian. Balaustrata from the ancient Greek βαλαύστιον / balaustion 'pomegranate blossom', because of the bell-shaped flower shape of the pomegranate tree) is an individually designed low row of columnar supports with continuous cover that can be used as a parapet or railing on stairs , terraces and Balconies is used.

A balustrade consists of column-like and mostly strongly profiled supports standing next to one another, which are called balusters or docke , and also of lower chord , upper chord , handrail and pedestals . A balustrade therefore consists of three structural elements, the cover plate, the balusters and the base. The row of the individual balusters creates a docking railing, the balustrade. The row of columns can be straight or curved. Balustrades are mostly made of wood or natural stone , more recently also from concrete .

The origins go back to ancient times . In the late Gothic period north of the Alps , balustrades with tracery were preferred in the exterior architecture of the churches . In the Mediterranean region, preferably in Italy and Dalmatia , they can also be found on civil buildings used to delimit verandas .
In the Renaissance , Baroque and Rococo balustrades were often used as a decorative and functional architectural element. Their variety of materials increased in the 19th century, so that cast iron in artistically processed form was also used. In the 20th century, the influence of the Bauhaus and the New Objectivity promoted the use of simple geometric forms of balustrades in stairwells, on verandas and facades.

In his third creative period, the German artist and sculptor Johannes Reinarz devoted himself to the balustrade in paintings and sculptures. The balustrade often takes on a human, playful character and is depicted and abstracted in a rich abundance of sometimes bizarre forms. 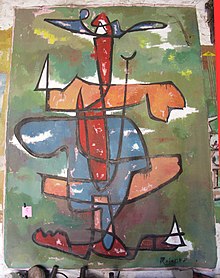 Sculpture of a balustrade by Johannes Reinarz in Taillades , 2005