This article describes the Battle of Kulm in 1813; on the battle of 1126 that took place at the same place see Second Battle of Chlumec .
Battle of Kulm
Part of: Wars of Liberation 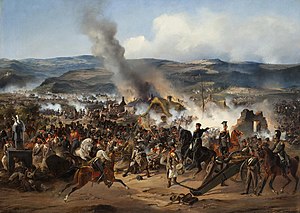 The Battle of Kulm was held on 29 and 30 August 1813 near the villages of Kulm (chlumec) and Priesten (Přestanov) near Teplitz (Teplice) and Usti nad Labem (Ústí nad Labem) in Bohemia place where the strategic important Nollendorfer Pass is located across the Eastern Ore Mountains to Saxony .

On August 27, 1813, Napoleon defeated the Bohemian Army of the allied Russians , Austrians and Prussians in the Battle of Dresden . The Allies under Schwarzenberg suffered heavy losses, over 20,000 soldiers and 40 guns, and retreated in three columns through the valleys of the Ore Mountains to Bohemia . Napoleon's plan was to pursue the defeated allies and cut off their routes of retreat via the Ore Mountains to Bohemia. In Koenigstein the French went on August 26 about the same . The Russian troops withdrew eastwards through Pirna along the Elbe and were overtaken by the French in the Königstein region. The Russian commander-in-chief Michael Andreas Barclay de Tolly tried to break away to Teplitz via Dippoldiswalde and Altenberg . In the battle near Krietzschwitz, the Russian 2nd Infantry Corps under General Prinz Eugen von Württemberg managed to hold up the troops of the French 1st Corps (around 32,000 men) under General Vandamme on a crucial day. In heavy retreat battles, for example at Berggießhübel, the Russian troops, meanwhile reinforced by the 1st Guard Infantry Division under General Jermolow , withdrew over the Nollendorfer Pass to Bohemia.

First day of the fight

On August 29th the French I. Corps pursued the Russians south and took Peterswalde. Vandammes Corps consisted of the infantry divisions Mouton-Duvernet and Philippon , as well as the Brigades Doucet , Quiot and Reuss, the Cavalry Division Corbineau and the Cavalry Brigade Gobrecht with a total of 52 battalions, 29 squadrons and 80 artillery pieces. The French attack via Straden took place on the Kulm and Priesten line against the Teplitz Basin, while the Russians under General Ostermann-Tolstoy took up a firm defensive position. The battle took place on the mountain slopes along Kulm-Teplitzer Strasse. The combined corps of the Russians consisted of the 1st Guard Infantry Division and several regiments of the 2nd Infantry Corps. From 1 p.m. onwards, Vandamme launched a violent attack on the Russian positions. Around 2 p.m. the 1st Cuirassier Division under Major General Deperadowitsch arrived as reinforcements. Two cuirassier regiments were now covering the position on the right flank, the Ulanski bodyguard cavalry and a dragoons regiments on the left flank. General Ostermann-Tolstoy himself was wounded, his left arm was shattered, and General Jermolow took command. The Russian line and guard troops withstood the superior strength of the attackers with heavy losses. The Russians lost 6,000 men on the first day; the guards alone lost 2,700 men.

Towards evening the troops under Prince Schwarzenberg and Barclay de Tolly arrived on the battlefield. At the same time, the Russian 2nd Cuirassier Division and parts of the 3rd Infantry Corps approached as reinforcements and replaced the 1st Guard Infantry Division in the front line, which had been exhausted by the battle. The 2nd Cuirassier Division and the Austrian Dragoon Regiment Archduke Johann and a mounted Prussian battery strengthened the right wing.

Second day of the fight

When the battle flared up again on August 30, the French were also facing strong Austrian troops under Bianchi . The right wing of the French leaned against wooded and steep slopes, the troops in the center stood in an arc on the hills south of Kulm to the north of Böhmisch-Neudorf, where the left wing found support on the wooded Striesowitzer Berg. Vandamme's positions were dominant and provided an excellent position for the French artillery. The command of the Russian troops in the center was now General Miloradowitsch and now numbered 58 battalions, 73 squadrons and 7 batteries. The Austrians gradually brought up to 24 battalions onto the battlefield. The far superior army of the allies was under the command of General of the Infantry Barclay de Tolly, the right wing was commanded by FML Count Colloredo , the center by Count Miloradowitsch and the left wing by Prince Golitzyn .

In the morning the right flank of the French was also attacked by the 3rd Russian Infantry Corps. To the right of Teplitzer Strasse, in front of the village of Karbitz, General Knorring's Russian brigade with cuirassiers and the Uhlan regiment was in position, behind it the Austrian Abele cavalry brigade was available as a reserve for the right wing. General Knorring attacked the enemy battery opposite him and captured 2 guns. A flank thrust by the French Gobrecht brigade drove Knorring back again until the flank fire of the Abele brigade on this side strengthened the starting line again.

The unexpected attack by the Prussian II Army Corps of General von Kleist (33 battalions, 24 squadrons and 14 batteries) from the Nollendorfer Höhe into the rear of the French changed the battle: General von Kleist and his Chief of Staff Grolmann had made the decision not to lead the troops through the parade of Graupen, but on the mountain ridge of Zinnwald straight to Nollendorf, in order to block the way back for the French troops. General von Zieten secured against the threat from Peterswalde with his cavalry brigade. General Vandamme was in charge of the battle of Horkaberg and at 10:00 received a report of the danger behind him. He actually expected the advance of the Saint-Cyr corps and was already certain of victory. Now he ordered his artillery to double the fire in the center, in the time gained he was able to throw 8 battalions against the new enemy on the left flank near Nieder-Arbesau.

When the Russians noticed the French withdrawal, the corps of Prince Eugene of Württemberg immediately launched the general offensive on the heights of Straden in the center, to the right of which the Bianchi Brigade advanced near Karbitz. On the left wing near Eggenmühle, the Russian grenadiers and the Austrian brigade of the Prince of Hesse-Homburg pushed back the French Mouton-Duvernet division, some of which separated over the ridge of the mountains near Ebersdorf and Fahrtwalde. Up to 100 guns were concentrated in the center against the French. Under this fire protection, the Austrian cavalry began to bypass the French left wing. In the case of the Prussians, the foremost brigade under General Pirch was able to penetrate Ober-Arbesau, but the capture of Nieder-Arbesau failed. A counterattack by the Corbineau cavalry division penetrated deep into the Prussian lines, and only the arrival of Major General Klüx's brigade stabilized their ranks. Meanwhile, the Allied cavalry occupied the long contested village of Priesten in the center of Kulm and was thus able to cut off a large part of the French infantry that was already flooding backwards. After a hopeless battle, up to 12,000 French surrendered. General Vandamme, Philippon, Corbineau, Quiot and Haxo fell into captivity and the entire artillery (80 guns) became the Allied trophies. The monarchs Tsar Alexander I and King Friedrich Wilhelm III, who were present with the allies . had observed the course of the battle of the Schlossberg near Teplitz and only appeared on the battlefield after the intervention of the Prussians under Kleist.

In the aftermath of the battle, the parties involved erected several memorials in memory of the fighting and their victims.

In Arbesau (Varvažov), the Prussian monument in neo-Gothic style was erected in 1817 based on a design by Karl Friedrich Schinkel . It has the following epitaph :

“The fallen heroes gratefully honor the king and fatherland. You rest in peace. Kulm on August 30, 1813 "

Originally it was just a cast iron pyramid with inscriptions and an iron cross on top. This cross was in 1813 as a war award from King Friedrich Wilhelm III. donated by Prussia . In 1857 the Schinkel pyramid was lifted onto a sandstone plinth in order to emphasize its equivalence with the Austrian monument opposite. The substructure was provided with the portrait of the Prussian king.

In the immediate vicinity is the Austrian Monument , which was erected in 1825 based on a design by Lieutenant Colonel Ourlandie. It is a cast iron obelisk dedicated to the Austrian general Hieronymus von Colloredo-Mansfeld , who struck the French for the second time on September 17, 1813. The monument was cast in the Neu-Joachimsthal ironworks , with a weight of 113 tons and a height of 17 meters, it is the most important foundry in the ironworks. The monument is crowned by a double-headed eagle with a laurel wreath . The sculptor was Wenzel Prachner from Prague.

The Russian monument is located on today's European route 442 from Tetschen-Bodenbach (Děčín) to Teplice (Teplice) near Priesten (Přestanov) and was erected in 1835 based on a design by Peter von Nobile . It is a 12 meter high cast iron obelisk on a pedestal, which is crowned by a statue of the goddess of victory Nike . On the occasion of the laying of the foundation stone by Emperor Ferdinand II , a gold coin of 15 ducats was minted, which today has a high collector's value. In 1835 a mass grave with a stone grave mound crowned by a cross was laid near the Russian monument for the fallen of the battle.

The anniversary memorial was inaugurated on the same street near Kulm (Chlumec) in 1913 on the occasion of the centenary of the battle . The 26 meter high tower was designed by Julius Schmiedel and is crowned by a bronze lion figure by the sculptor Adolf Mayerl . The Austrian state took over the financing of the monument.

Also in 1913 the French monument was erected on the road from Hohenstein (Unčín) to Straden (Stradov) . It is a simple stone obelisk with inscriptions. Near the monument is the Juchtenkapelle (Juchtová kaple), which marks the center of the battlefield approximately.

In Straden (Stradov) itself, an obelisk erected in 1843 near the Nepomuk Chapel commemorates the battle.

In the Sernitztal above Schanda (Žandov u Chlumce) the Vandamme Obelisk from 1913 is located near the place where General Vandamme was captured.

The Kleist monument in Nollendorf (Nakléřov) commemorates the intervention of the troops of the II. Prussian Army Corps under General Kleist in the fighting . In Berlin , Nollendorfplatz is a reminder of this connection.

In Vienna (17th district, Hernals ), Kulmgasse has been a reminder of the battle since 1884 .

The so-called Kulmer Cross was specially donated and awarded for the services of the Russian associations in the battle .

For many years there has been an educational trail on the Battle of Kulm and Priesten in 1813. This educational trail consists of eleven stations. It begins at the Russian memorial in Přestanov (Priesten) and leads past the memorials and graves of the battle up to Nakléřov (Nollendorf). In 2013, shortly before the 200th anniversary of the battle, the information boards (educational trail boards) set up at the stations were renewed and the monuments and their surroundings were restored to their proper condition.