View of Altenberg with Geisingberg in the background

The border with the Czech Republic is five kilometers away.

The municipal parts belong to the city of Altenberg (sorted according to the date of incorporation):

Bärenstein, Geising and Lauenstein are districts, the other places are referred to as districts.

After miners at the southern foot of the Ore Mountains in the vicinity of Krupka (Graupen) had probably already started to mine tin soaps in the 12th century , in later decades they pushed further and further towards the Ore Mountains in search of the actual deposit. They first discovered the deposits around Zinnwald (mentioned in a document in 1378) before they found it in Altenberg around 1440. The deposit , the so-called hermaphrodite , has proven to be the most important tin deposit in Central Europe over the centuries . In the immediate vicinity of the countless small collieries in which mining began, Altenberg emerged as a scattered settlement for miners.

Development of the city

Originally the parcels belonged to the Lords of Bernstein, owners of the Bärenstein estate. On December 16, 1446, the knight Hans von Bernstein sold the fourth part of his rule to the elector, so that the elector became the landlord of the area that is now Altenberg. Due to the productivity of the ore deposits, the place quickly developed into the most important mountain town in the Eastern Ore Mountains . The economic upturn led to the granting of town and market rights as early as 1451. In this context, the place was mentioned as "frymarkt". As a city Altenberg was mentioned in 1489 as "uf dem Aldenberge" and in 1534 as "zum Aldenbergk". The name is explained as (in comparison with the mountain and the place Geising ) old mountain . The Altenberger Pinge , a collapse funnel built in 1620, the pewter wash (technical display system), one of the former 13 washes with stamping mills and shaking ovens in the Altenberg-Geising-Zinnwald area, and the Neubeschert-Glück- Stolln, in which the old mining methods are recreated.

Since 18./19. In the 19th century, various homework ( wooden toys and immortelle production) supplemented the opportunities to earn a living in mining. In the first half of the 20th century, Altenberg developed into a winter sports center in the Eastern Ore Mountains due to its snow-sure location and good accessibility ( connection to the railway network in 1923 ).

From February 9 to 14, 1937, the German Ski Championships took place in Altenberg .

Altenberg was spared direct combat operations during the Second World War until just before the end of the war. In the course of the Prague operation , Soviet troops advanced on May 6, 1945 over the ridge of the Eastern Ore Mountains towards Prague . This resulted in retreat skirmishes with the troops of the German Army Group Center in Altenberg and the surrounding area . The Altenberg train station was attacked from the air on May 4th, 5th and 7th 1945 to interrupt the routes of retreat. The town church of St. Nicholas from the early 16th century was also destroyed, the ruins were removed in 1953. On May 8, 1945, the German troops fleeing through the city to Bohemia were attacked several times by Soviet low-flying aircraft. Members of the Wehrmacht looted the partly abandoned houses on May 9 and bought civilian clothing. At the same time, there was a battle between the Soviet troops and a werewolf group founded in Altenberg in April 1945 . On the evening of May 9th, a fire broke out in the city, which spread to a large part of the development by the next day and destroyed 120 houses. The causes of the fire have not yet been fully clarified. In total, around three quarters of the historic city center was destroyed in the last days of the war. Among the destroyed town houses were numerous characteristic buildings from the 17th and 18th centuries. The 17th century tradesmen's house on the broad market was considered the most prestigious building. It had a half-timbered upper floor and a steep hipped roof above the ground floor made of quarry stone. 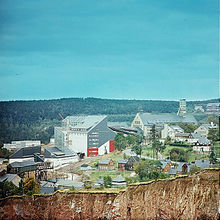 View of the daily facilities of the VEB Zinnerz (1982)

In the 1950s, the expansion of the spa system began. After the mining was stopped in 1991 for economic reasons, the place concentrated more on tourism and the recreation and health resort. In 2004 the city was given the title Kneipp health resort . Altenberg has developed into an important winter sports center in the Eastern Ore Mountains.

The Geisinger city council voted 21 December 2010 mainly to the incorporation to Altenberg on January 1, 2011th The incorporation was approved on December 29, 2010 by the municipal supervisory authority of the Saxon Switzerland-Eastern Ore Mountains district. It was significantly influenced by Geising's precarious financial situation. The city was unable to present a balanced budget in 2010, the debts amounted to € 4.8 million at the end of 2010, including € 2.28 million deficits .

As a result of the incorporation, Altenberg grew to an area of ​​over 146 km², making it by far the largest municipality in the district. The population rose from around 5,700 to just under 8,900. At the same time, a new regional tourist stronghold emerged: in 2009, both communities together counted just under 423,000 overnight stays, which corresponds to around 17% of the overnight stays registered in the district. Tourism and health resorts secure around 1,800 jobs in both communities.

Compilation based on BLASCHKE 2003, German Academy of Sciences in Berlin 1964, ZÜHLKE 1966 and information from the State Statistical Office of Saxony, from 1998: status as of December 31. of the respective year

Since the municipal council election on May 26, 2019 , the 22 seats of the city council have been distributed among the individual groups as follows:

Description: The coat of arms is split into red and blue and divided into gold. On the right a golden bishop with a staff and on the left a double-tailed lion divided in white and red . Below is a working kneeling miner in black.

Look over the pinge

View from Kahleberg to Altenberg - in the background the Geisingberg

Mining, structures, parts of the landscape

The Altenberg tin ore mining is a selected site for the proposed candidacy for the UNESCO World Heritage Site of the Ore Mountains Mining Region .

The Evangelical Church of Altenberg (address: Dippoldiswalder Straße 6a) is a successor to the former town church of St. Nicholas. This was essentially late Gothic and exposed to frequent fires (most recently in 1876). Structural changes followed. In 1878 the choir was redesigned as a polygon, a gable roof was built and the tower with a pointed helmet was rebuilt. The interior was neo-Gothic. After the end of the Second World War, on May 9, 1945, the church was bombed several times by the Soviet air force, and the church, the parish hall, the diaconate, the rectory and the city suffered severe damage. The ruins were removed in 1953. The current church was built between May 1989 and December 1991.

The technical museum, which opened in 1957, is located in a pewter pound wash that was originally built in the 16th century and has been technically functional again after renovation. In connection with the 180 m long Neubeschert-Glück tunnel ( excavated 1802–1849, exhibition tunnel since 1971), it shows the path of tin from mining to processing.

The visitor mine, opened in 1992, opens up the deep-Bünau tunnel, which was excavated by the von Bünau noble family in 1686 . Above all, the widening of the rich roaster created by setting fire is impressive. The nearly three-kilometer tour leads underground to the German-Czech border.

Culinary specialties in the area are herbal liqueurs with regionally appropriate names such as "Knappenfeuer", "Kufenwärmer", "Pyramidenöl" and others, which have been produced in various brands in the Altenberg herb liqueur factory since 1842.

Ski and toboggan slope in Altenberg

Altenberg is considered an international winter sports center. Up until the 1950s there was also a ski jump and an ice rink on Geisingberg , but a racing sled and bobsled run has existed since 1986.

Stagecoach stop at the railway and bus stations in summer

Altenberg is located on federal highway 170 , which connects Dresden via Zinnwald with northern Bohemia and Prague . This road has become an important link between Saxony and the Czech Republic since it was built in the 1840s. As Europastraße 55 , it was part of the pan-European traffic corridor IV, which ran from Scandinavia to Southeastern Europe. As a result of the changed economic development after German reunification and the eastward expansion of the EU , the volume of traffic had increased significantly, especially in heavy goods vehicle traffic. This was also due to the fact that the Zinnwald-Georgenfeld border crossing between the Vogtland ( Bad Brambach ) and Upper Lusatia ( Neugersdorf ) is the only crossing between Saxony and Bohemia that can be used without restrictions for truck traffic. After the construction of the new handling facilities (2001), it is characterized by very short truck handling times (15 minutes), which attracted additional traffic. As a result, Altenberg was passed by around 3,900 trucks per day in the summer of 2005. This through traffic (about every 22 seconds a truck) was a major burden (noise, source of danger, etc.) not only for Altenberg itself, but also for the district of Kipsdorf. From March 21st December 2006, the chronically overloaded B 170 was therefore for the Uphill heavy goods traffic is blocked and was only released again when the federal motorway 17 Dresden – Prague was put into operation .

Since 1923 Altenberg has been the end point of the 38 km long Müglitztalbahn , which connects the mountain town through the Müglitztal with Heidenau and the upper Elbe valley. The railway line made a significant contribution to the development of Altenberg into a winter sports center in the Eastern Ore Mountains. Initially laid out as a narrow-gauge railway, it has been operated as a standard-gauge railway since 1938. Since 2002, DB Regio Südost has been using Siemens Desiro Classic (DB class 642) railcars for passenger trains instead of locomotive-hauled trains on regional line 72 . Since December 12, 2010, the city ​​railway of Saxony , which also uses Siemens Desiro Classic , has been running on the Müglitztalbahn . If winter sports conditions are favorable, there are also special winter sports trains that tourists can use to get to Altenberg directly from Dresden Hbf . Immediately at the “Kurort Altenberg” train station there is a covered public transport interface to the intercity bus service. Seven lines connect Altenberg to the surrounding area, including the Czech border town of Teplice :

In Altenberg there is a primary school and the Altenberg branch of the "Glückauf" high school in Dippoldiswalde / Altenberg with a sports focus ( elite school of sports ). There is a high school in the neighboring town of Geising.

Parts of the municipality of the city of Altenberg

Cities and communities in the Saxon Switzerland-Eastern Ore Mountains district