The title of this article is ambiguous. Further meanings are listed under Dippoldiswalde (disambiguation) . 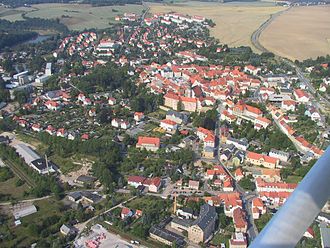 Aerial photo of Dippoldiswalde from August 6, 2003

Dippoldiswalde ([ dɪpɔldɪsˈvaldə ], colloquially Dipps ) is a large district town in the Saxon Switzerland-Eastern Ore Mountains district in Saxony . The city is centrally located in the Eastern Ore Mountains and is about 20 kilometers south of Dresden , halfway between the border with the Czech Republic and the state capital. With around 14,000 inhabitants, Dippoldiswalde is one of the three medium-sized centers in the district .

The city is located in the northern Ore Mountains on the Rote Weißeritz .

The town consists of the Dippoldiswalde Dippoldiswalde nucleus and twenty hamlets, 1973-2014 incorporated were. All districts form their own district at the same time . The boundaries of districts and districts are usually congruent. In some districts there are several places that then belong to the same district. The core town has the largest share of the population of the city of Dippoldiswalde, followed by Schmiedeberg and Reichstädt , which also have over 1000 inhabitants.

According to legend, Dippoldiswalde goes back to a hermit named Dippold, who is said to have lived in the Dippoldiswalder Heide on the Einsiedlerfelsen around 800 . This is said to have founded the place. The only thing behind this legend is the fact that the locator was an otherwise undetectable person named Diepold. The name of the place is traced back to this personal name, which carries the Old High German word diot (people) and soon (bold) or walt in the sense of rule.

According to many historians, Dippoldiswalde was founded as a Waldhufendorf under the direction of the Burgraves of Dohna around 1160/70. Gerhard Cheap sees a possibility that these burgraves colonized the so-called Burgwartsberg in Pesterwitz before 1206 , built the castles Rabenau and Dippoldiswalde and had villages cleared . Since a German Burgward Dohna is not documented in Gau Nisan and neither is a Burggrafschaft Dohna before 1156, this possibility is unlikely. In view of new dendrological finds in the old mine of Dippoldiswalde from 1160, even the foundation directly from Dohna is questionable. As the latest mining archaeological research shows that Dippoldiswalde is a very early mining settlement, it does not necessarily have to be a Waldhufendorf. This would then be rather unlikely.

The first documentary mention took place on June 11, 1218, when a Johannes sacerdos de Dipoldiswale (Pastor Johannes von Dippoldiswalde) was mentioned in a document of the Meißner bishop . A village church must have already existed there. In 1266, Dippoldiswalde is attested as the property of the Wettin margrave Heinrich the Illustrious , when the citizens of Dippoldiswalde had a dispute with the citizens of Freiberg over deliveries to mines. In the diploma, however, it is not stated where the mines in question were located, so this written source does not constitute evidence of Dippoldiswalder silver mining around 1266. 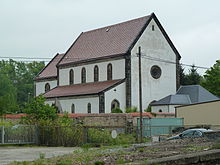 At that time there were already two representative stone churches in Dippoldiswalde - the Marienkirche, built around 1200 near the market, and the somewhat younger Nikolaikirche in the Weißeritzaue. Only the late Romanesque-early Gothic west tower of the Marienkirche (the Lorenz patronage mentioned in the Middle Ages is not attested) is present. In contrast, the Nikolaikirche, built around 1230/40 as a short basilica without a tower, has been completely preserved. This was built as a new building after the demolition of the original village church, which must have been a smaller hall church made of wood or stone.

As part of renovation and safety work on old mining facilities , backfilled high medieval silver mines were discovered in the area of ​​the Obertore and on Dresdner Straße, which were verifiably in operation in the 12th century. The oldest dated pit timbers come from 1158 and, although used secondarily, from 1170, numerous other timbers from the period from 1183/84. In addition, wooden shaft extensions, turned bowls, remains of rope, ceramic shards and bones from the 13th century were found. The previously discovered shafts were shortly after the mid-13th century again filled Service. A second mining phase, in which the previously backfilled mines were driven through, could be dendrochronologically dated to around 1280. Silver mines in Dippoldiswalde were explicitly mentioned for the first time in 1300, when Friedrich Clem (the illegitimate son of Margrave Heinrich the Illustrious) transferred the silver tithe to the Nimbschen monastery near Grimma .

In 1401, Margrave Wilhelm I occupied Dippoldiswalde in the Dohna feud , which had been lent to the Burgraves of Dohna by the Wettins since 1366. At this time there was still a very small amount of mining at Dippoldiswalde, which no longer produced any income, as can be seen from the mint master's accounts 1401–1405. It was not until the 1470s that mining took off again in the second mining period.

In 1541 the Lutheran Reformation reached the place. In 1632 the city suffered severe damage in the Thirty Years' War . As the location of a margrave castle, Dippoldiswalde took on functions as a dominant, administrative and commercial or market center for the surrounding towns at an early stage ( office ). Consequently, in 1874 the city became the seat of the new Dippoldiswalde administration .

At the end of the Second World War , on April 17, 1945, anti-aircraft guns of the Wehrmacht shot down two American planes which crashed near the Teichmühle. On the night of May 9th, a Red Army vanguard raised the victory flag on the church tower.

The first local commandant was Major Datschin. The troops stationed here were responsible for many looting and rape. In accordance with the decision of the Allies and the new state administration, large companies, land and landowners were now expropriated (→ Land Reform Act ).

New, smaller, state- owned companies emerged in the GDR era, including a fittings factory, a container construction company and a foodstuff factory . There was also an engineering school for the food industry and a state-owned estate . Dippoldiswalde became a district town in the district administrative structures of that time. After the reunification , with the reorganization of the federal states, the city remained a district town until 2008, with the second Saxon district reform, Dippoldiswalde lost this status when the Weißeritzkreis was dissolved on August 1, 2008 in the newly created district of Saxon Switzerland-Eastern Ore Mountains. 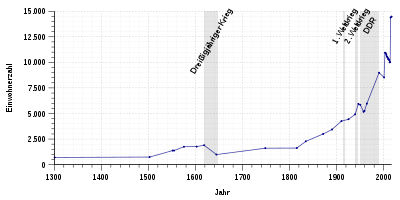 Population development of Dippoldiswalde. Above from 1300 to 2016. Below a section from 1871

Development of the population (from 1998 as of December 31st)

The city council was last elected on May 26, 2019. The total of 22 seats are distributed among the individual parties and lists as follows:

In the mayoral elections that took place at the same time, Kerstin Körner ( CDU ) was able to prevail against Dirk Massi (non-party) with 75.04% against 24.96%.

Dippoldiswalde maintains partnerships with the Czech Bílina , the Polish Stronie Śląskie (Seitenberg) and with the municipality of Bösel near Oldenburg.

Seal of the city council of Dippoldiswalde

Description: A portrait in gold of a white-bearded hermit with a nimbus and a blue robe with two crossed straps. It is elevated by two diagonally crossed natural three-rooted uprooted conifers with three cones each.

Symbolism: The coat of arms contains a curiosity. The founder Dippold contained in the coat of arms is taken from a legend. This Dippold is said to have lived in the wooded areas of what is now the Dippoldiswalder Heide around the Einsiedlerstein in the Heide. This man appeared in the coat of arms from 1588. In 1669 he then wore a beret and in 1730 he received crossed ribbons on his chest. The crossed trees with the cones are based on the coat of arms of the Burgraves of Dohna (two crossed silver stag poles). The current city coat of arms was created in 1894 with the following content: The hermit is given a blue robe, the city colors blue and yellow were chosen.

General view of the castle and town church 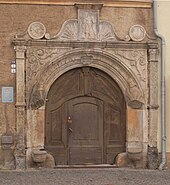 There are three museums in Dippoldiswalde:

Dippoldiswalde is the first city in Saxony and in the new federal states to meet the criteria of a prime shopping city. The certificate was handed over on June 10, 2008.

Dippoldiswalde has been connected to the railway network since 1882. This year, in 750 mm was narrow gauge executed Weißeritztalbahn after Schmiedeberg opened a year later the extension followed up Kipsdorf. Since the devastating flood of the century in 2002 , the Weißeritztalbahn was closed. Reconstruction began in 2007; the section between Freital-Hainsberg and Dippoldiswalde has been in operation again since December 14, 2008, and since June 17, 2017, to the Kipsdorf health resort.

Dippoldiswalde is located on the important federal highway 170 between Dresden and the Czech border near Zinnwald. The heavily frequented transit route led directly through the city center. In 1977 work began on building a bridge to bypass the city center, but this was soon interrupted and only completed between 1993 and 1995. Since then, the B 170 has passed the city center to the east. Despite the construction of the A 17 , the road is still very busy, and truck traffic has repeatedly caused protests from residents. However, since the end of 2006 the B 170 has been closed to heavy truck traffic.

The bus station in Dippoldiswalde is served by various bus routes of the regional Saxon Switzerland-Eastern Ore Mountains. The main lines are:

In addition, there is a city traffic line with line 361 between the Dippoldiswalde Nord development area and the Ulberndorf district.

The miller's school, founded in 1881, has had its headquarters in Dippoldiswalde since 1888.
Further story:

In addition to the vocational school center, there are the following school facilities in the municipality of Dippoldiswalde:

→ Main article : List of personalities from the city of Dippoldiswalde

In Dippoldiswalde, a form of the Saxon dialect is spoken: the southeast Meissen niche , which is one of the five Meissen dialects .

Cities and communities in the Saxon Switzerland-Eastern Ore Mountains district