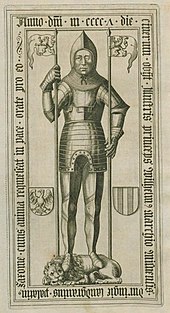 Wilhelm I, the one-eyed man (born December 19, 1343 in Dresden , † February 9, 1407 at Grimma Castle ) was Margrave of Meissen . His nickname is related to the legend that Saint Benno appeared to him in a dream because of his quarrels with the church and stabbed his eye out.

Wilhelm was born the son of Frederick the Serious and Mathilde of Bavaria . He owned and ruled the paternal lands until 1382 with his older brothers together and alternately. After his brother Friedrich died in 1381, he carried out the so-called Chemnitz division with the other heirs in 1382 , in which he received the margraviate of Meissen as an inheritance. From 1395 he also administered the Mark Brandenburg as governor of Jobsts of Moravia .

Wilhelm was one of the most energetic Wettin princes , worked wisely to remove the powers of the smaller, noble-free lordships in the interior of the Mark Meissen and to defend against the Bohemian Luxembourgers . He also acquired the Colditz rule , took over the rich estates of the Burgraves of Dohna , which he drove out ( Dohna feud ), and was a great patron of the Meissen cathedral , whose exemption he successfully helped to enforce. At the end of the 14th century he had extensive new buildings built in the Gothic style at Rochlitz Castle and Castle Mildenstein . In 1401 he acquired the first three vineyards in the Lößnitz, from which the Wettin Hofweingut Hoflößnitz arose for the next almost 500 years . In 1404 Wilhelm donated the Augustinian monastery in Dresden and furnished it with property.

As a result of the high expenses of the margrave, which u. a. originated by the conquest of Dohna Castle , but the land and population were also heavily burdened. In addition to special tax levies, there was an increasing economic deterioration due to a considerable reduction in the silver content of the coins issued by the main Wettin mint . It was not until 1412 that Frederick the arguable managed to stabilize the currency again.

Wilhelm's first wife was Elisabeth of Moravia († 1400), after whose death he married Anna of Braunschweig for the second time. Both marriages remained childless, whereupon his inheritance fell to his nephews Friedrich the Peaceful , Friedrich the Arguable and Wilhelm the Rich .

Commons : Wilhelm I.  - Collection of pictures, videos and audio files