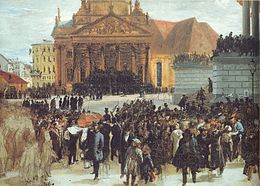 A fallen man is a combatant killed in combat , but in the narrower sense only if death occurs immediately ( genealogical symbol : ⚔ ). If the combatant dies at a later point in time, one speaks of a fatal wound (genealogical sign: ✝⚔ ).

The term comes from the time when fighting was generally still upright and soldiers who were hit "fell" to the ground. A parallel, older expression for this is "to stay" (eg: "NN stayed in Flanders"). The German Navy also speaks of the “comrades who stayed at sea”. Early references can be found in the Bible , in which the term is apparently used as a synonym for "to die in war" for both non-combatants civilians and soldiers:

“His sons fell before the enemy; and all that fell that day, both men and women, were twelve thousand. "

"And a lot of people fell."

An example of the respectful content of the term "fallen" can be found in Schiller's Nänie from 1800:

"Not saved the divine hero , the immortal mother ,
When he, at Scaean gate falling, his destiny fulfilled."

Handling and use of language

Memorial at Bergisel for the Kaiserjäger who fell in 1866

For soldiers, evidence is usually provided by witnesses or, since the beginning of the 20th century, the identification tag . Soldiers whose whereabouts are not certain are classified as “ missing ”.

In the official German casualty lists of the First World War , the term “dead” for soldiers killed in combat was replaced by “fallen” in autumn 1914. At least there used to be also the English name falling soldier before the now common formulation K illed I n A ction (KIA) has passed.

In the case of deaths of soldiers z. For example, in the Bundeswehr missions abroad , there was no mention of the dead until 2008 , even if the death was caused by hostile acts. On October 24, 2008, Defense Minister Franz Jung spoke of the fallen for the first time at the memorial service for two soldiers killed in the war in Afghanistan .

For the fallen, an abbreviation is used on gravestones, in genealogies and in encyclopedias before the date of death instead of the symbol “†”, which symbolizes two diagonally crossed swords (“⚔”), occasionally also by the letters “gef.”. The Iron Cross is placed on people who perished in prison camps , gulags or special camps. 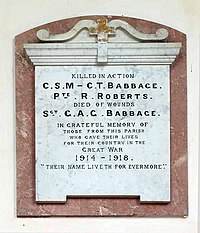 Plaque on St Andrew and All Saints Church, Wicklewood, Norfolk