A military cemetery (also: Memorial Cemetery , obsolete: Fallen cemetery ) is a tomb on during a war fallen soldiers are buried. Military cemeteries are protected as a military version of a war cemetery .

Military cemeteries are not always located in the actual theater of war. Some of these facilities are separate burial grounds within civil cemeteries. Soldiers' graves are often also found in spatial connection with prisoner-of-war camps or military hospitals . Fallen have also been partially converted into their homelands, and to honor cemeteries buried . Following British tradition ship may wrecks as was grave ( English , literally war grave ) be declared and thus receive the special protection status of the Geneva Conventions.

The reason for the change in language from a military cemetery to a war cemetery in recent decades is that a large number of those buried were by no means combatants and died as victims of direct military combat, but rather from the inhumane conditions of camp detention, such as prisoners of war . In addition, there are civilian deaths from bomb attacks and the victims of forced labor during the Nazi era .

In the past, soldiers' graves were considered by many people to be places of “hero remembrance”, today war cemeteries are viewed by the majority of Europeans as places of reminder for peace and against war and violence - especially because of the experiences of the First and Second World Wars with millions of dead.

Central office of the Lübeck cemetery of honor

Today, the Geneva Conventions provide internationally binding principles for the establishment and maintenance of war cemeteries. In the additional protocol of 1977, Art. 34 mortal remains states :

“The mortal remains of persons who died in connection with an occupation or during an imprisonment caused by occupation or hostility, and of persons who were not nationals of the state in which they died as a result of hostilities, are respected; The graves of all these persons are also respected, maintained and marked in accordance with Article 130 of the IV. Agreement [...]. " 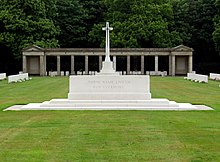 In the Federal Republic of Germany, the law on the preservation of the graves of victims of war and tyranny ( Graves Act ) has been in force since 1952 . The domestic war cemeteries were placed in the care of the respective communities. The Volksbund Deutsche Kriegsgräberfürsorge e. V. is dedicated to the task of collecting, preserving and caring for the graves of German war dead abroad on behalf of the Federal Government.

Most of those buried in military cemeteries on German soil during the First World War died in military hospitals, during fighting in the border areas in the north-east and south-west, or during the first bombing raids on West Germany. Combat operations took place on German territory only to a comparatively small extent at the beginning of the war, namely in East Prussia and Upper Alsace (see border battles # First World War ).

During the Second World War, especially from 1944 onwards, far more German soldiers and civilians died on the territory of what is now the Federal Republic of Germany . For example, they are buried in the Halbe forest cemetery in Brandenburg, on the Golm hill on Usedom , the Obermarchtal military cemetery (Baden-Württemberg) or the Eversberg cemetery in North Rhine-Westphalia. The Bitburg-Kolmeshöhe military cemetery in the Rhineland-Palatinate district town of Bitburg became particularly well-known due to the visit of Federal Chancellor Helmut Kohl and US President Ronald Reagan on May 8, 1985 and the “ Bitburg controversy ”.

Some of the German soldiers who died in both World Wars are buried in community cemeteries (→ Category: Cemetery in Germany ), often in separate areas marked as a military cemetery or cemetery of honor , for example at the main cemetery in Dortmund , the Öjendorf cemetery in Hamburg or the Cologne south cemetery .

In Germany there are a total of 760,000 graves of war dead from the Soviet Union . This includes both individual graves in community cemeteries and large war cemeteries with tens of thousands of dead. The majority come from the time of the Second World War , from 1940 to 1945. They are soldiers of the Red Army , Soviet prisoners of war or victims of forced labor during the Nazi era . 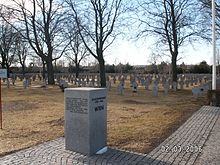 In Austria, according to the War Graves Act of 1948, the Federal Government is responsible for the permanent maintenance of military cemeteries on Austrian territory . But after the First World War was the en Laye Treaty of St. Germain in Articles 171 and 172 specifies that the grave sites of soldiers and sailors, by the government in whose territory they are having to deal with respect and to receive are .

After the Second World War, the issue was only regulated in the Austrian State Treaty in 1955. This not only includes soldiers, but also all civilians who were forcibly brought to Austria.

The care of both the cemeteries and individual graves was carried out by the Austrian Black Cross , which also looks after them abroad.

Situation in other countries 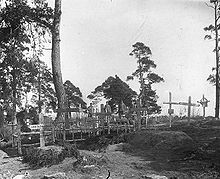 German military cemetery during the First World War on the Eastern Front , around 1916

Mass grave that has not yet been closed on the German military cemetery in Insterburg created by the VDK . The small wooden coffins with the mortal remains of German soldiers are numbered, starting on the left with "2035" (photo from 1999)

The Volksbund Deutsche Kriegsgräberfürsorge is responsible for the maintenance of cemeteries abroad where German soldiers are buried on behalf of the Federal Government. To this end, Germany has signed bilateral agreements with numerous countries . There are German war graves in 100 countries around the world, and the Volksbund looks after a total of two million war graves in 44 countries.

Numerous German soldiers are also buried in international military cemeteries and memorials, many victims of the Battle of Verdun (1916), for example in the Douaumont ossuary . The southernmost German soldier's grave is on the Kerguelen in the southern Indian Ocean.

France, Belgium, the Netherlands and Luxembourg

Especially in France and Belgium (z. B. Military Cemetery Lommel ) there are large military cemeteries where soldiers of both the Central Powers and from the area of the British Commonwealth and the United States are buried who died there in two world wars (see. Memory of Operation Overlord ).

Numerous military cemeteries from the First World War can be found around Verdun , the Somme, the Ainse (all in France) and near Ypres in Belgium. In Great Britain, the Commonwealth War Graves Commission was founded in 1914 ; its first president was Edward, Prince of Wales (later King Edward VIII ). The German counterpart, the Volksbund Deutsche Kriegsgräberfürsorge , was founded in December 1919. The Austrian Black Cross was also founded in 1919. The US Congress established the American Battle Monuments Commission by law in March 1923 . 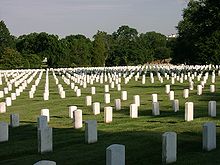 Since the Second World War, fallen US soldiers have been transferred back to the USA as far as possible. American soldiers are buried either in their hometown or at one of the 139 United States National Cemeteries , depending on loved ones .

Particular care is taken to ensure that soldiers who perished on the territory of opposing states do not finally find their final resting place on this territory. On the other hand, there are US war cemeteries on the territories of states with which the USA was allied in the world wars or that were neutral . In the Cambridge American Cemetery and Memorial, west of the university city of Cambridge in England, a total of 3812 fallen American soldiers lie who lost their lives in France, Italy and North Africa during World War II.

After the Battle of the Bulge in World War II, American soldiers who had died just east of Germany's western border were permanently buried in cemeteries in the Netherlands, Belgium and Luxembourg.

In 1962 Denmark and Germany signed a German-Danish war graves agreement. It envisaged that many of the dead "for the purpose of better monitoring and care of the graves" would be transferred to 30 cemeteries, where most of them rest. When the reburial was supposed to begin in 1965/66, a controversy arose.

“The War Graves Photographic Project” initially aimed to photograph every single war grave and memorial in collaboration with the CWGC ( Commonwealth War Graves Commission ). This was very popular; It was decided to photograph war graves of all nationalities and make them traceable in a database. In March 2012 it contained over 1.7 million photos.

The following important information is missing from this article or section:
Grave site (temporary)
Help Wikipedia by researching and pasting it .