The title of this article is ambiguous. Further meanings are listed under Hagenow (disambiguation) . 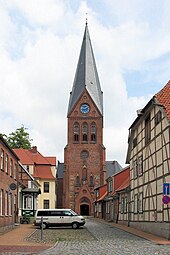 Hagenow is a city in western Mecklenburg-Western Pomerania , around 30 kilometers southwest of the state capital Schwerin . Hagenow is one of the 18  medium-sized centers in the country and the seat of the Hagenow-Land office, although it is not itself an official.

The historic center is an example of a Mecklenburg farming community - old town with half-timbered houses and other monuments from the 17th to 19th centuries.

Hagenow is located in the west of the Ludwigslust-Parchim district . The closest larger cities are in the northeast Schwerin (approx. 30 km) and Wismar (approx. 65 km), and in the west Hamburg (approx. 80 km) and Lübeck (approx. 85 km).

The city is traversed by the Schmaar , which is dammed into a mill pond in the city center .

The name is first encountered in 1194 as Hachenowe , later Haghenow (e) (1316, 1326), then Hagenowe and finally Hagenow . Although the West Slavic genitive ending -owe ( place des ... ) suggests a Polabian origin of the name, the toponomics is based on a combination of the Germanic word Hagen and the Germanic ending ö (g) , öch for Aue, Wiesenland . The name then meant something like fenced meadow land .

Hagenow in the Middle Ages

Hagenow is first mentioned in a document in Isfried's partition contract of 1194. Even then, Hagenow had a castle and a church. In 1201 secular rule over the place was passed from the Counts of Ratzeburg to the Counts of Schwerin . The church is mentioned in 1230 in the Ratzeburg tithe register , which lists the parishes belonging to the diocese of Ratzeburg at that time, sorted according to parishes . In the year 1326 Hagenow was a village when the Countess of Schwerin Merislave to Her jointure belonging "dorp do Haghenowe" her cousin, Count Heinrich von Schwerin left. In 1358 Hagenow came to the dukes of Mecklenburg . In 1370 the place was already referred to as an oppidum , i.e. a city, but also remained insignificant as a city for a long time, since it is still called a village in the regional healing register from 1520.

Development from the 16th century

The years 1538, 1748 and 1766 were marked by large fires, which several times destroyed almost the entire development. The oldest building still in existence in the city dates back to 1720. Also due to the fires is the typical Mecklenburg rural town architecture that dominates the city center. In 1746 Hagenow was referred to as a market town and in 1754 its status as a town was confirmed by the official award of town charter. Hagenow became a country town in Mecklenburg and was represented on state parliaments until 1918 as part of the towns in the Mecklenburg district .

Since around 1760, Jewish families have settled here with the permission of the sovereign, who set up a cemetery and built the synagogue (now called the Old Synagogue ). The last service took place in 1907, the last burial in 1935. The synagogue was desecrated during the November pogrom in 1938 , and was probably saved from being burned down by other buildings in the immediate vicinity. Then it served various purposes until the start of the renovation in 2001, including as a warehouse.

The office in the Mecklenburg district of the Grand Duchy of Mecklenburg-Schwerin was later given the name of the city. The size of the 8,500 resident office was 4.15 square miles. The city of Hagenow itself had 3400 inhabitants. At the beginning of the 19th century, growth gradually began, which was promoted from 1846 by the nearby route of the Berlin-Hamburg railway . At the same time, Hagenow played a not laudable role in the Mecklenburg Vormärz with the expulsion of the poor doctor Ernst Raber from 1842, but he was elected to the Mecklenburg Assembly of Representatives for Hagenow in 1848 . This period of Hagenow in Vormärz is known regionally in Mecklenburg as Hagenow Wirren .

The economy expanded around 1900 to include a roofing felt factory, steam grinders and sawmills for the wood processing industry, and a steam dairy that produced cheese. The population rose to 4109. In 1933, Hagenow became the district town of the district of Hagenow, which was named after 1938 .

During the National Socialist era , the synagogue in Hagenstrasse was set on fire during the November pogroms in 1938 ; the fire was put out by neighbors worried about their own homes. After the pogroms of 1938, a family, a doctor and another man from the Jewish community lived in Güstrow. The two men were married to non-Jews; the family was deported to Auschwitz in 1942. During the time of the Second World War, an airfield / air base of the German Air Force with two runways, aircraft hangars and barracks was built in front of the gates of Hagenow near Sudenhof. After 1945 tank forces of the Soviet Army were stationed there.

From around 1968 to 1988, the large residential areas Neue Heimat with 1,454 apartments and Kietz with 1,032 apartments were built using prefabricated panels. In addition to agriculture, sawmills, brickworks and the cheese factory were the basis of the economy. In 1988 the population was 11,600.

After the political change, the historic city center and since 1996 the Kietz ( urban redevelopment ) were fundamentally renovated as part of urban development funding. The Panzer Grenadier  Battalion 401 of the Bundeswehr has been in the "Ernst Moritz Arndt Barracks" since April 1, 1991.

The city council of Hagenow consists of 25 elected representatives. Since the last election on May 26, 2019 , five parties have been represented with the following distribution of seats:

Möller was elected in the mayoral election on June 14, 2015 with 57.8 percent of the valid votes for a term of seven years.

The city of Hagenow has a coat of arms, a flag and an official seal.

As amended by Barsbütteler redrawn Hans-Frieder Kühne replaced the coat of arms was approved on 15 March 1996 along with the flag by the interior minister of Mecklenburg-Vorpommern.

Description of coat of arms
"In red the bust of a looking bishop with a natural complexion, silver hair, a red decorated golden bishop's hat and a golden robe."

Flag description
“The flag of the city of Hagenow is evenly striped lengthways in red and yellow; on the red stripe on the leech is the figure of the city coat of arms in flag-appropriate tinging; the length of the flag is related to the height like 3 to 2. " 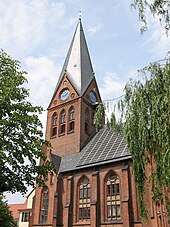 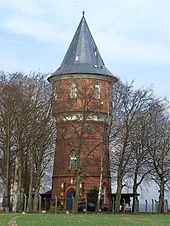 The building was extensively redesigned in the 1970s. The church was divided west of the transept . In the nave to the west of it, false ceilings were put in and then community rooms and apartments were set up, only the eastern part with the choir and transept has been used as a sacred space since then, with the community today facing west, contrary to the traditional orientation. In 1994 the building received a new organ and in 2001 a photovoltaic system.

Former water tower and post office at the train station

Unused motorway bridge from the former route planning in the 1930s

The museum for everyday culture in the Griesen area and the old synagogue at Langen Straße 79 consist of half-timbered buildings typical of a 19th century country town. The land of the arable family Jessel, the councilman Rick and the hat maker Brandt with residential and farm buildings now house exhibitions and collections on the past everyday culture in the region. In 2007, the synagogue of the former Jewish community at Hagenstrasse 48 was reopened as part of the museum and cultural center. The ensemble of community buildings that has been preserved, consisting of a synagogue, school building and car showers, is unique in Mecklenburg.

Stolpersteine ​​have been in place in Hagenow since July 25, 2009 . These were framed in the sidewalk in Langen Straße, Höhe Mühlenteich. This makes Hagenow one of over 500 places in Germany and Europe where you can find them. On November 3, 2011, further stumbling blocks were added. These remind of the victims of the Nazi era .

Since April 1973 the post office and telecommunications office of the city has had the singers' association "Posthorn", which has developed into a remarkable choir quality and even appeared in major programs on GDR television .

In 1991, Hagenow was accepted into the urban development program of the state of Mecklenburg-Western Pomerania. The intention behind this was to revive and also to maintain the typical Mecklenburg retail and commercial structure that characterizes the city. At the same time, the historic center was also to be renovated and made more attractive again. The implementation of these measures led to the fact that today several retail stores line the streets of the old town.

On the outskirts of the city center there are two large industrial and commercial areas, on the one hand a 46- hectare area on Steegener Chaussee, where there are also three combined heat and power plants , and a 62-hectare area in the Sudenhof district along the federal road 321 .

The list includes a selection of larger companies; a detailed overview can be found on the city's website.

Hagenow is on the B 321 federal road between Pritzier and Schwerin and on the L 04 state road between Wittenburg and Picher . The Hagenow junction is located north of the city on the A 24 motorway ( Hamburg - Berlin ).

The Ludwigsluster Verkehrsgesellschaft operates a 16-line bus network in Hagenow within the city and to the surrounding regions and districts. There is a central bus station at Hagenow Stadt train station .

The older Hagenow Land station was put into operation with the inauguration of the Berlin-Hamburg railway on October 15, 1846. In 1847 the branch to Schwerin was added and in 1894 the Kaiserbahn to Bad Oldesloe was added. During the construction of the last-mentioned line, the second Hagenow station near the center was set up in 1894 ; it has been referred to as Hagenow City since 2010 .

After the division of Germany at the end of the 1940s, the trains on the line in the direction of Bad Oldesloe only ran to Zarrentin . Passenger traffic on this connection was discontinued in 2000. Since 2002, the city station has been used again by the East German Railway as the end point or start of the railway line in the direction of Ludwigslust and Parchim .

Several sports clubs are located in Hagenow. The Hagenower SV consists of a soccer, a handball, a bowling, a table tennis and an athletics department. In 2011 the SC AWO Hagenow joined the Hagenower SV.

The SV Hagenow eV emerged in 1990 from the BSG unit Hagenow and each has a volleyball, karate and winter sports department.

In the past, the football team of ASG Vorwärts Hagenow, which was dissolved at the turn of the century, appeared nationwide.

Cities and communities in the Ludwigslust-Parchim district