Alt Krenzlin is a municipality in the Ludwigslust-Parchim district in Mecklenburg-Western Pomerania (Germany). It is administered by the Office Ludwigslust-Land with its seat in the non-official city of Ludwigslust .

Alt Krenzlin is located in the Griesen area , a wooded area between the rivers Sude , Elde and Elbe . The Ludwigsluster Canal and the Rögnitz flow in the southeast of the municipality .

Alt Krenzlin is surrounded by the neighboring communities of Groß Krams , Bresegard bei Picher and Picher in the north, Ludwigslust in the northeast and southeast, Göhlen in the east and south and Belsch in the west.

In the district of Neu Krenzlin there was a manor owned by a von Penz family based in Redefin . In 1706 this property was sold to the ducal chamber of the Duchy of Mecklenburg [-Schwerin] and has been leased since then.

A peat glassworks was built from Neu Krenzlin in 1743 on the Klein Krams peat bog . The duchy built houses for the glassmakers here. This laid the foundation for the development of the Büdnerdorf Krenzliner Hütte. In 1779 the glassworks were given up and the glassmaker's apartments were sold to the highest bidder at Büdnerrecht. Except for the place and field names of the glass melt, nothing remains of the glassworks.

The municipality has no officially approved national emblem, neither a coat of arms nor a flag. The official seal is the small state seal with the coat of arms of the state of Mecklenburg. It shows a looking bull's head with a torn neck fur and crown and the inscription "• GEMEINDE ALT KRENZLIN • LANDKREIS LUDWIGSLUST-PARCHIM". 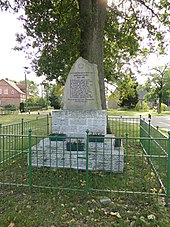 Memorial to the fallen of the First World War
→ Main article : List of architectural monuments in Alt Krenzlin

The section of federal highway 5 from Ludwigslust to Boizenburg / Elbe runs through the north of the municipality . The closest larger cities are Ludwigslust 13 and Hagenow 14 kilometers away. There are rail and motorway connections from these places ( A 24 Berlin – Hamburg).

Cities and communities in the Ludwigslust-Parchim district