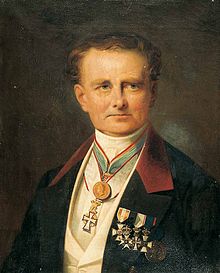 Georg Christian Friedrich Lisch with order and the medal for art and science (Mecklenburg-Schwerin) . Oil painting by Theodor Schloepke , (1865)

Memorial plaque on the house at Wismarsche Strasse 147 in Schwerin 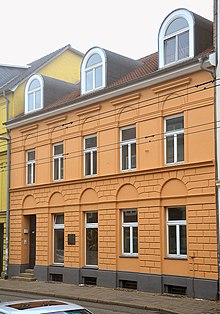 The listed building at Wismarsche Strasse 147 in Schwerin, where Lisch lived from 1844 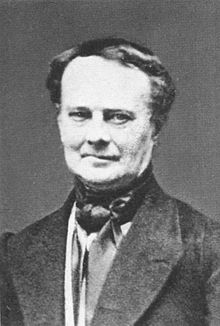 The descent from Georg Christian Friedrich Lisch (he initially used the name form Friedrich Lisch himself) is a question that has been discussed controversially by researchers. It is believed that the lawyer Carl Christoph von Kamptz (1769–1849), later the royal Prussian state and justice minister, was his actual father. However, he did not legitimize it. Friedrich Lisch grew up as the son of the ducal valet Johann Christian Lisch (1776–1844) and his wife Johanna Sophia Christiane, nee. Brunow (1775-1842).

Soon after his birth, the family moved to Güstrow , where Lisch's father got a job at the regional court. Friedrich Lisch spent his childhood and youth in Güstrow as the eldest of four sons of his parents. From 1809 he attended the cathedral school in Güstrow (grammar school) and passed the final examination with distinction in autumn 1822. He then studied theology , philosophy , history and mathematics at the University of Rostock (1822-1824) and the Humboldt University of Berlin (1824-1826). In 1824 he became a member of the Rostock Freemason Lodge "Prometheus".

After initially working as a private tutor in Tessin (Mecklenburg), Lisch found a job as a collaborator at the Grand Ducal Fridericianum High School in Schwerin in 1827 . In 1832 he was promoted to director of a private girls' school, during this time Lisch took an active part in the reorganization of the Schwerin school system and founded several new schools.

Friedrich Lisch found his real calling in the field of Mecklenburg regional history . In the meantime, Grand Duke Friedrich Franz I had noticed Lisch, appointed him archivist and in 1834 appointed him to the Secret and Main Archives in Schwerin. With Lisch's active participation, the Association for Mecklenburg History and Archeology was founded in the following year, 1835 , whose engine and soul was Friedrich Lisch for almost five decades. He was first secretary of the association, built up the association's collections and published the association's yearbooks and annual reports, in which he published countless articles of his own. From 1863 until his death he was also responsible as an editor for the Mecklenburg record book .

With versatility and zest for action, Lisch quickly got into influential offices in the following years. In 1835 he was appointed government librarian, in 1836 supervisor of the antiquities collection and in 1838 of the coin cabinet. By the Grand Duke Friedrich Franz II. Lisch was appointed by a decree dated December 27, 1852 as “Conservators for the historical art monuments” of the Mecklenburg-Schwerin region . As the first state-owned monument conservationist in Mecklenburg, he was also to direct his attention to those monuments that were not subject to the sovereign jurisdiction .

Shortly after his appointment as conservator for historical art monuments, the internal restoration of the Dobbertiner monastery church began in 1853 . Lisch was appointed to the local building commission as a permanent advisory board for the monument preservation supervision of the work to be carried out. Well-known architects and artists, with whom Lisch had already worked repeatedly, were involved in the work up to autumn 1857. Although there were some unpleasant arguments between the Wismar architect Heinrich Thormann , the Schwerin master builder Theodor Krüger , the sculptor Gustav Willgoh , the court painter Gaston Lenthe and the glass and porcelain painter Ernst Gillmeister in connection with the designs for the furnishings, it was the balancing one Thanks to Lisch's ideas that the work was successfully completed.

In 1856 he was appointed to the archives councilor in 1867 to the grand ducal Mecklenburg-Schwerin secret archivist council. Friedrich Lisch gave the Mecklenburg regional historical research a decisive influence for more than four decades in the flourishing phase.

Friedrich Lisch was married three times and had eight children, including the youngest son Friedrich Wilhelm Lisch (1844–1905), whose memory as councilor and municipal syndic of Schwerin is held in honor to this day.

Friedrich Lisch is one of the most important German historians of the 19th century. He is considered to be the founder of prehistoric research in Mecklenburg and a co-founder of the three-period system ( Stone , Bronze , Iron Ages ), which the chronology of Nordic prehistory follows to this day.

In 1843 he became a corresponding member of the Society for the History and Archeology of the Baltic Provinces of Russia .

In 1852 Lisch was a founding member and until 1853 a member of the Scholars' Committee of the Germanisches Nationalmuseum Nürnberg (GNM) for the subject of pagan antiquities of the Slavs (changed to Pagan antiquities of Northern Germany at his own request ).

In 1849 Lisch was awarded an honorary doctorate from the University of Rostock.

Countless other historical associations in Germany and beyond awarded Lisch corresponding or honorary membership. The Grand Duke himself jokingly called Lisch "his Humboldt" .

Commandeur of the royal. Danish Dannebrog = and of the royal. Prussian crowns = order , Knights of the Red Eagle =, the North Star and the Oldenburg. Merit = order of 3 cl., Owner of the grand ducal. meklenb. golden merit = medal and the royal. Hanoverian golden honor = medal for science and art on ribbon, the Imperial Austrian and the great imperial Russian golden merit = medal for science, real member of the Royal Society for Nordic Antiquity in Copenhagen and the Royal Academy of Sciences in Stockholm , corresponding member of the royal Academy of Sciences in Göttingen , the Kaiser. Archaeological Society of St. Petersburg , the antiquar. Society of Abbeville and Upper Lusatia. Society of Science zu Görlitz , a real member of the Archaeological Society in Moscow, honorary member of the Anthropological Society in Berlin , the history and antiquity research societies in Dresden, Mainz, Hohenleuben, Meiningen, Würzburg, Königsberg, Lüneburg, Emden, Luxembourg, Christiania, Zurich, Stettin and Greifswald , corresponding member of the historical and antiquity research societies in Lübeck, Hamburg, Kiel, Hanover, Leipzig, Halle, Jena, Berlin, Salzwedel, Breslau, Cassel, Regensburg, Copenhagen, Graz, Reval, Riga, Leyden, Antwerp, Stockholm and the Hanseatic one History Association, first secretary of the Association for Meclenburg History and Archeology .

The literary and journalistic work of Gweorg Christian Friedrich Lisch is (almost) unmanageable. So far, more than 4000 monographs, multi-volume works and articles published by him as a dependent person are known in the state bibliography MV . Most of Lisch's works can also be used publicly as digital copies via various portals.