from Wikipedia, the free encyclopedia
Battle of Hanau
Part of: Wars of Liberation 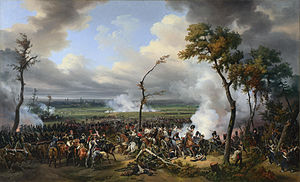 The battle of Hanau on October 30th and 31st, 1813 took place in the area of ​​the city of Hanau . She was part of the wars of liberation against the French occupation. The main location was in what is now the Lamboy Forest . Hanau was then part of the Grand Duchy of Frankfurt .

Bavaria signed the Treaty of Ried on October 8, 1813 , with which it dissolved the alliance with France and switched to the side of the Allies . That happened just in time, as the Battle of the Nations near Leipzig on October 19th decided the campaign against Napoleon by defeat. While Napoleon at Leipzig fought against the Allies, the chief commander of the waiting Bavarian army , Carl Philipp von Wrede on the ratification of the contract by the Bavarian king.

On October 28, 1813, the 1st Bavarian Chevaulegers Regiment occupied Hanau. When troops of the French vanguard arrived from the Kinzig valley, the first skirmishes took place in which Prince Ludwig von Waldeck , a nephew of the Bavarian King, was so badly wounded that he succumbed to his injuries.

On the morning of October 29, 1813, 3,000 to 4,000 French soldiers around General Exelmans were captured by the Bavarian Brigade Deroy and the Russian auxiliary corps Tscherenitschew and Kaisaroff. In the afternoon, the allies formally took possession of the city of Hanau.

United Austro- Bavarian armed forces under the command of the Bavarian General Count Wrede with a strength of 43,000 soldiers (3 Bavarian, 2 Austrian divisions with cavalry and Austrian-Bavarian artillery under the Austrian Major General Swrtnik) formed to cut off Napoleon's army . A cavalry unit of the Russian Major General Tschernischow joined them.

On the morning of October 30, 1813, Wrede posted his troops north of the Kinzig in front of the Lamboy Forest. The left wing was positioned to the right and left of the Fallbach , the center in what is now the Tümpelgarten area and the right wing at the Lamboy Bridge. The disadvantage of this setup was the lack of opportunities to retreat. This happened despite the fact that the positions of the French were poorly known. These were mostly in the Lamboy Forest. In the morning there were fierce fighting, especially on the right wing, but neither party achieved a decisive breakthrough. Only at eleven o'clock did Wrede find out that Napoleon was encamped with his elite troops in the Lamboy Forest.

In the early afternoon, however, a large part of the ammunition of the Bavarian and Austrian troops had been fired. Napoleon began his offensive around three o'clock. At first, the emperor turned his attention to the right wing. This had to be strengthened by Wrede, so that the left wing was weakened. Thereupon Napoleon gave the order to the cavalry and artillery to attack the left wing intensified. There was a heated cavalry battle on the Fallbach. The French cavalry targeted the Austrian-Bavarian battery on the left wing. Thanks to the Frankish artillery officer Oberleutnant Johann Baptist von Roppel , who was almost taken prisoner, it was possible to stop the French cavalry by letting them come within 70 meters and then opening fire. Thus the entire Allied artillery of the left wing could be saved. The Austro-Bavarian cavalry had defended the von Roppels battery, which was surrounded by the French. With the support of the French artillery, the French attacked the left wing of Wrede. But after the entire ammunition of the Bavarians and Austrians had also been fired there, they fled. The French horsemen and the artillery then threw themselves increasingly on the center, which could not withstand the attack wave. Only the right wing of the Bavarian-Austrian troops held the position. At about 5 p.m. the allies had to withdraw, and the battle ended in Napoleon's victory, the last of his victories on German soil.

This cleared the way for the French troops to head west. On the night of October 31st, the French also fired at Hanau to secure the withdrawal of their troops. The Hanau suburb caught fire. The Bavarians had to evacuate Hanau, and the city was occupied by the French Fontanelli division.

At noon on October 31, Wrede gave the order to retake Hanau. With six Austrian-Bavarian battalions, the Russian cavalry unit of General Alexander Iwanowitsch Tschernyschow and the Franconian battery von Roppels, Wrede recaptured the city. The Fontanelli division did not offer much resistance, and so Hanau came back into the possession of the allies. Wrede was seriously injured by a shot in the abdomen. The Austrian general Graf Fresnel took over command for him. By seven o'clock all the French troops had withdrawn.

Napoleon was able to get to Frankfurt unhindered by the victory, where he arrived on the afternoon of October 31, 1813. The militarily senseless battle was a definite victory for Napoleon. Wrede did not succeed in blocking Napoleon's path. The allied troops of the Russians , Prussians and Austrians could have cut Napoleon's path long ago, but failed to do so. With this battle, Bavaria wanted to militarily underpin its move to the side of the Allies. Therefore, from the point of view of the Bavarian politicians and military, it was relatively indifferent whether the battle was won or lost - the main thing was that it took place. A total of 6,000 French and 8,000 to 9,000 allies were killed in the battle. However, the allies were able to capture 10,000 mostly weak and sick French.

On November 5, 1813, Alexander I and his troops marched into Frankfurt am Main . The best officers of the Hanau battle were honored with a promotion and awarded many medals. For example, Carl Philipp von Wrede was awarded the Grand Cross of the Austrian-Imperial Leopold Order , the Russian Alexander Nevsky Order , the Russian Order of Saint George and the Commander's Cross of the Austrian Military Maria Theresa Order .