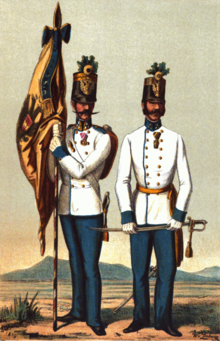 The Imperial and Royal Army formed the land forces of the Austrian Empire . It was created from the remnants of the Imperial Army of the Holy Roman Emperor after the dissolution of the Imperial Army and went in 1867 to the Joint Army Austria-Hungary and the kk Landwehr over. In addition to the Imperial and Royal Army , there was also the Austrian Navy . The army took part in the coalition wars until 1815, the Italian campaign from 1848 to 1849 , the Hungarian War of Independence in 1848 , the Sardinian War in 1859 , the German-Danish War in 1864 , the Italian campaigns in 1866 and the German War against Prussia in 1866 . Important generals were Josef Radetzky , Karl Philipp zu Schwarzenberg , Karl von Österreich-Teschen , Vinzenz Ferrerius von Bianchi , Julius von Haynau and Alfred I. zu Windisch-Graetz .

Formation of the Imperial and Royal Army and Napoleonic Wars

Field Marshal of the Kk Army

After the dissolution of the Holy Roman Empire of the German Nation, the Imperial Army passed into the Imperial-Royal Army. Because of several defeats by Napoleon, Archduke Karl von Österreich-Teschen began serious military reforms in order not to repeat the previous setbacks in the future. In 1809 the Austrian Empire formed a new coalition against the French Empire and invaded the Kingdom of Bavaria , which was allied with the French. After the Kk Army was defeated in the battles near Landshut and Eggmühl , they began to withdraw into their own territory. Austria hoped for Prussia and Russia to enter, which, however, partly due to the indecision of the Prussian King Friedrich Wilhelm III. and the unwillingness of the Russian Tsar Alexander I, initially did not materialize. After the Grande Armée had occupied Vienna, it met the Imperial and Royal Army in Aspern and Essling. The ensuing battle of Aspern ended in Napoleon's first defeat on the battlefield. At the Battle of Wagram the Imperial and Royal Army was ultimately defeated after heavy fighting and Austria had to sign the Peace of Schönbrunn, which ended the Fifth Coalition . In 1812 the Austrian Empire was forced to take part in the French invasion of Russia. After this failed, Austria joined the Sixth Coalition the following year and played a decisive role in Napoleon's decline. After the defeat at the Battle of Dresden, the coalition forces withdrew to Bohemia and then invaded the Kingdom of Saxony again . At the Battle of Leipzig , in which almost 600,000 soldiers took part, Napoleon was decisively defeated by Field Marshal Karl Phillip zu Schwarzenberg and the Confederation of the Rhine , founded by Napoleon, dissolved. In 1814, the coalition armies captured Paris, forcing Napoleon to sign and abdicate the Fontainebleau and Paris Peace Treaties. The Imperial and Royal Army fought in the Seventh Coalition mainly against the Kingdom of Naples under Joachim Murat, which was decisively defeated by Vincent Ferrerius von Bianchi at the Battle of Tolentino .

After the Napoleonic Wars, the Imperial and Royal Army put down the Carbonari uprisings in northern Italy in 1821 and the Cracow uprising in Galicia in 1846 .

When revolutions broke out in 1848 , the army was deployed to crush them. A popular uprising broke out in Hungary , which initially sought more autonomy in the empire, but was ultimately fought for the independence of the Hungarian half of the empire. The Imperial and Royal Army under Radetzky , Jelačić and Windisch-Graetz and the help of the Russian army ensured the Habsburg monarchy's survival. The Kingdom of Piedmont-Sardinia , which hoped to acquire Lombardy and Veneto from a Habsburg empire that was diverted from the uprisings, declared war on Austria ( First Italian War of Independence ). Field Marshal Josef Radetzky, who led the army in northern Italy, had to evacuate Milan because of violent revolts. After the victory of Custozza , Piedmont-Sardinia signed an armistice. However, this was broken again the following year after several Italian states, which were taken over by liberal politicians, joined Piedmont. After a joint Italian army was again decisively defeated by Josef Radetzky at the Battle of Novara , the Piedmontese King Karl Albert abdicated in favor of his son Viktor Emanuel II and Piedmont signed a peace treaty with the Austrian Empire.

During the Sardinian War , the Imperial and Royal Army fought against the French Empire and the Kingdom of Piedmont-Sardinia . She was ultimately defeated by the French-Piedmontese troops in the Battle of Solferino . As a result of this defeat, 60 generals were sent into retirement and Ludwig Ritter von Benedek was appointed the new Feldzeugmeister in order to advance the modernization of the army.

In 1864 Austria and Prussia fought the German-Danish War over the duchies of Schleswig and Holstein. Notable deployments of the Imperial-Royal Army in this conflict were the battle on the Königshügel, the battle of Oeversee , the battle of Vejle and the income of the Danewerks and the Frederica fortress.

After the defeat in the German War in 1866, which Austria had fought together with the armed forces of the German Confederation as part of the federal execution against Prussia, Emperor Franz Joseph I was forced in 1866/1867 to join the Hungarians , who had been in passive resistance since the failed attempts at secession in 1849 to grant so-called compensation partial sovereignty and to convert the monarchy, which had been run uniformly until then, into the so-called “dual monarchy”. The Hungarian half of the empire was given the right to set up its own territorial forces , the ku Landwehr (Hungarian: Királyi Honvédség) , in addition to the Kk Army (now the Joint Army , which was subordinate to the Minister of War ) . It was subordinate to the Hungarian: Honvédelmi minisztérium .