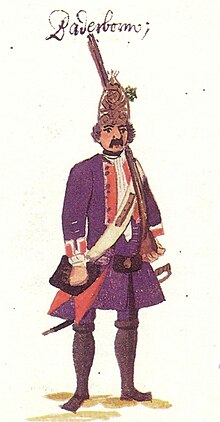 A grenadier of the Imperial Army in the War of the Polish Succession in front of Philippsburg 1734 ( Niederrheinisch-Westfälischer Reichskreis ): Paderborn Infantry Regiment - contemporary Gudenus manuscript

At the Reichstag in Nuremberg in 1422 , a list of the troops to be provided for an imperial army came about for the first time. In the following hundred years, the size of the Reichsarmee was determined alternately in terms of specific troop strengths or amounts of money to finance it. At the Reichstag in Worms in 1521 , the "always newest matriculation" increased the strength to 20,000 infantry (exactly 20,063) and 4,000 cavalry (exactly 4,202) as well as the total remuneration for one month ( Roman month ) to 51,269 fl Guilders ).

The Reichsmatrikel stipulated the quotas of troops, the individual states- had to ask for the imperial army.

The first imperial register of 1422 prescribed the following troops for the individual imperial estates:

The imperial circles only came into being at the beginning of the 16th century. The first six imperial circles were established at the Diet of Augsburg in 1500. They were simply numbered and were made up of imperial estates from all groups with the exception of the electors . With the creation of four further imperial districts in 1512, the Austrian hereditary lands and the electoral princedoms were also included in the district constitution.

From then on, the contingents of the imperial circles were referred to as district troops , which they actually provided to the Imperial Army of the Holy Roman Empire . According to the imperial dimensional order, all imperial districts were obliged to provide contingents, but not all of them met this obligation.

The "always newest matriculation" set up on the Worms Reichstag in 1521 determined the simple imperial contingent, the "Simplum", with 4,202 horsemen and 20,063 foot servants , later simplified to 4,000 or 20,000 men. Their salary, ten guilders for a rider , twelve guilders from 1542, and four guilders for a footman, was 128,000 guilders per month. This sum, called a Roman month , became the measure of the circles' contributions to the war chest. The attack could be doubled or multiplied for a war ("Duplum", "Triplum" etc.).

The Reichsheeresconstitution ("Reichsdefensionalordnung") of 1681 finally determined the composition of this Reichsheer for large, the entire Reich concerned deployments from the contingents of the Reich circles. The simple total strength (Simplum, Latin simplum the simple ) was now set at 40,000 men (28,000 infantry and 12,000 cavalry) and remained almost the same until the end of the Holy Roman Empire in 1806. The territories of the empire had the simplum of keeping troops under arms for the imperial army. If necessary, the Reich could also request twice ( duplum ) or three times ( triplum ) this quota. In practice, the princes not infrequently fulfilled their duty only by providing insufficiently equipped and trained troops, while good associations (if any) were used for their own power politics or rented out to foreign princes for subsidies . The usability of the imperial army also suffered from the fact that the contingents of the imperial districts were made up of troops from different imperial estates, who never practiced together in peacetime and usually had different drill regulations , which made a united deployment with other contingents very difficult. For the open field battle therefore only partially suitable, the troops were often used for security and occupation tasks, such. B. the Franconian district infantry at the Sendlinger Murder Christmas .

The further division within the district to the individual imperial estates in accordance with the Worms register was now a matter for the districts.

Since the reforms of Emperor Leopold , the top management of the Imperial War had been in the hands of an Imperial War Council , the establishment of which was at the discretion of the Imperial Estates. The imperial election surrenders usually stipulated that the Reich War Council should consist of six Catholic and six Protestant councils and, at times, also of the district directors .

The military high command of the Imperial Army was nominally headed by the Kaiser himself. In fact, a Reich Lieutenant General acted as his deputy, later a Reich General Field Marshal . In practice, this could only be appointed jointly by the Emperor and the Reichstag, since a clear definition never really took place. Because of the parity decided at the Reichstag in Augsburg in 1555 , a Catholic and a Protestant Reich Field Marshal were appointed.

Field Marshals of the Holy Roman Empire were:

Further ranks at the imperial level were

These positions were usually doubly filled by denominational affiliations. Lower ranks were not required because the individual contingents of the Reich Army were led by commanders of the Reich circles or estates.

Actual ranks of the Imperial Army

Conflicts of interest between the emperor, imperial estates and the districts

In the Peace of Westphalia in 1648, the imperial estates acquired the right to raise their own troops (Latin jus armorum ). The powerful princes therefore set up troops to pursue their interests (so-called armed imperial estates ). Consequently, they were also unwilling to cede power or troops to the Reichskreis. If at all, they submitted their troops directly to the emperor as part of a subsidy treaty , i.e. to the imperial army. Smaller imperial estates, which belonged to a group of armed imperial estates, either did not raise any troops at all, also subordinated their contingents directly to the imperial army or bought themselves free from their obligations by redeeming their contingents in the form of cash payments.

At the beginning of the Spanish War of Succession , the establishment of a standing army was considered at the Regensburg Reichstag in 1702, but it never came about. The Imperial Army therefore only existed during individual wars.

"In no imperial war did all imperial estates or, since 1681, all imperial districts put soldiers on an equal footing." Whether and how many troops they actually provided after the Reichstag had passed a resolution depended on the respective political conditions within a district or on its foreign policy endeavors. In relation to the empire, the princes who wrote the district were responsible for providing the district contingent in full in the event of a declared Imperial War. They also had to “instruct the district generality, that is, to submit to their military command”.

In February 1664, during the emperor's war against the Turks , the Reichstag decided to use the first, still voluntary, armature of the empire for "eyligen aid". So the Swabian Reichskreis put two regiments on foot and four companies of cavalry in the Reichsarmee.

Total strength in 1686: 40,000 men. Various imperial circles made troops available. The Swabian Empire provided a Catholic and Protestant regiment on horseback and a regiment on foot as voluntary Turkish aid only to the emperor for six campaigns (1683–1686) in Hungary upon request under certain conditions.

In the Franco-Dutch War , the Imperial Army was used by the conclusion of the Empire in 1674. Here, for example, the Swabian Reichskreis provided two Catholic and two Protestant regiments from the summer of 1675, which were subordinate to the Reichskommando, but remained in the country. They were dissolved in 1677. In 1676 the imperial army with 40,000 men under the leadership of l Charles V of Lorraine successfully besieged the French-occupied fortress Phillipsburg

The conclusion of the empire on February 14, 1689 determined the participation of the imperial army in the Palatinate War of Succession (1688–1697) against France. Their total strength in 1691 was 19,000 men. Here, for example, the Swabian Imperial Circle provided three Catholic and two Protestant regiments of its own, from 1691 an additional mixed dragoon regiment , from 1696 another mixed regiment on foot. From 1693 to 1698, the district also took three Württemberg house regiments as subsidiary troops in pay, which it also placed in the Imperial Army.

For the war against France in the War of the Spanish Succession (1701–1714), the imperial army was mobilized according to the closing of the empire on September 30, 1702. In 1702 it had a total strength of 44,000 men. Here the Swabian Reichskreis provided two regiments on horseback, a dragoon regiment and five regiments on foot. The five grenadier companies were mostly used separately from their regiments in a special grenadier battalion as a tactical unit.

The imperial conclusion of 1734 offered the imperial army due to the occupation of Lorraine by France in the War of the Polish Succession (1733-1738). Here z. B. the Swabian Empire all its troops (a cuirassier regiment, a dragoon regiment and three regiments on foot).

The conclusion of the empire on March 22, 1793 put the imperial army in the war against revolutionary France in the first coalition war (1792–1797). The total strength was 44,000 men in 1795. In 1796 the Swabian Reichskreis was the only one to provide a complete corps (five times the matricular strength ( quintuplum ) = 7,300 men; with a cuirassier regiment, a dragoon regiment, four regiments on foot, two grenadier battalions, two combined battalions and an artillery reserve of 20 guns), divided into three brigades. Duke Friedrich II of Württemberg concluded an armistice with General Moreau on July 17, 1797 and called off his contingent from the Swabian corps; the Baden Margrave Carl Friedrich followed this step on July 25. The district then negotiated a ceasefire for the remaining troops. Before the negotiations were concluded, the imperial field marshal Archduke Karl had the remains of the Swabian corps (4,000 infantry, 850 horsemen and 21 artillery) surrounded and disarmed by 6,000 men near Biberach an der Riss . The Franconian District provided a cuirassier regiment, a dragoon regiment, four regiments on foot, two grenadier companies and artillery. The Bavarian District provided a regiment on foot. Electoral Palatinate Bavaria provided its troops directly to the Imperial Army. The Upper Rhine District provided three regiments. The Kurrheinische Kreis provided four regiments. The Niederrheinisch-Westfälische Kreis provided three regiments on foot.

The last war of the Imperial Army was also fought against France. In the second coalition war (1799–1802), a final contingent was drawn up by the closing of the empire on September 16, 1799. The Swabian Imperial Circle, for example, did not have a closed corps. Württemberg and Baden put their contingents together with their own troops in the Imperial Army. The 3rd District Infantry Regiment (Königsegg-Aulendorf) and the District Cuirassier Regiment (Hohenzollern) were incorporated into the Austrian army with Austrian uniforms.

The most important execution of the Reich took place through the conclusion of the Reich on January 17, 1757 against the Hohenzollern Brandenburg-Prussia , which had breached the peace by occupying Saxony in the Seven Years' War in 1756 . The Franconian, the Swabian, the Upper Rhine, the Kurrheinische, the Lower Rhine-Westphalian and the Saxon Reichskreis then provided troops with great delay. The Imperial Army was deployed in the Battle of Roßbach under French command and was decisively defeated by the Prussians. Although it had done well and the defeat was primarily due to incorrect planning by the French commander-in-chief, Prince Soubise , the German-minded public of the Reichsarmee later dubbed the nickname "Reissausarmee".

In 1789 the Imperial Court of Justice in Wetzlar imposed the execution of the revolutionary Liège . The prince-bishop Caesar Constantin Franz von Hoensbroech was previously expelled in unrest . The Lower Rhine-Westphalian Reichskreis was entrusted with the implementation of the Reich execution.

The end of the Imperial Army

With the Holy Roman Empire in 1806, the Imperial Army also went under. The Rhine Confederation no longer had a uniform army structure, but only provided for the placement of troops under French command.