from Wikipedia, the free encyclopedia
Battle of Rossbach
Part of: Seven Years War 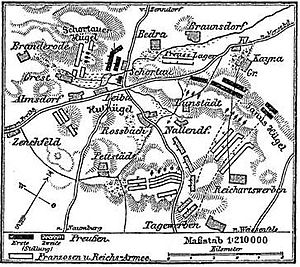 In the Battle of Roßbach near Reichardtswerbe in the Electorate of Saxony (today Saxony-Anhalt ) on November 5, 1757 , the Prussian King Frederick the Great defeated the French army under the Prince of Soubise (1715–1787) and the Imperial Execution Army that was coalition with them under the command of the Reich Field Marshal Prince von Sachsen-Hildburghausen . The battle marked one of the turning points in the Seven Years War : Since then, the confrontation with France has been limited to the West German territories, and it was only 50 years later under Napoleon that French troops were to advance that far into Germany .

Stein in Burgwerben , headquarters of the Reich Field Marshal

Coming from Dresden, Friedrich II gathered his troops around Leipzig by the end of October. Taking the initiative against the coalition army, he crossed the Saale in three places by November 3rd, and on November 4th he faced the enemy, who was facing east, south-east of Muenchen; he himself camped between Bedra and Rossbach with the front facing west. Since there was disagreement between Prince Soubise, who only wanted to move into camp, and Hildburghausen, who was pressing for attack, the coalition army, which was twice as strong in numbers as the Prussian troops, first marched south, but turned on the day of the battle from 2 p.m. south of Pettstädt to the east.

The allies, believing they could defeat the Prussians in retreat, pulled the cavalry of the Reserve Corps under Duke Broglie and the Bourbon brigade in front of their own troops, which marched east in three columns, and thus opened the actual ones Battle moves of the day. The Prussian king recognized the danger to his left flank from the attic of the Roßbach manor house and decided, for his part, to attack the same head of the opposing army. Major General Friedrich Wilhelm von Seydlitz was therefore immediately ordered with 38 squadrons of cavalry from the regiments Garde du Corps , Gens d'armes, Rochow, Driesen, Czettritz, Meinicke, Leib-Kürassiere and Szekely between Janus-Hügel and Posendorfer Berg to attack the enemy.

Since Seydlitz was able to take his position unnoticed by the enemy, his attack of 6,000 horsemen, which was carried out at around 3:30 p.m., hit the advancing allies, who had been shot at by Prussian artillery from Janus Hill for 15 minutes, hard. Seydlitz, who skilfully attacked in two hits, first head-on, then in an encircling movement on the wings, threw the enemy down in a scuffle and took the enemy battery that was carried along. A counterattack by the allied cavalry under Duke Broglie failed, the point they had sent ahead dispersed and streamed back towards Storkau.

Even before the attack on Seydlitz, around 2:30 p.m., Frederick II formed his infantry to the south, in such a way that the stronger left wing was more in the front than the right (see Leaning Order of Battle ). Staggered so "crookedly", the Prussians quickly reached the Nahlendorf-Reichardtswerbe line, now with the front to the southwest, the three marching columns of the enemy coming towards them. The allies only managed to get the front regiments of the three columns into position. These regiments, the Piedmont, St. Chamont, Mailly, La Marck, Poitou and Provence regiments, faced the Prussians for battle. It was 4 p.m.

Franconian battalions of Prince George of Hesse , leaving the column to the right , fled because they were demoralized and carried away by the cavalry that had been struck back by Seydlitz. The king embraced the now open right wing of the columns and so heightened the emerging panic of the three columns, in which infantry, cavalry and artillery tried in vain to disentangle each other and develop. The panic culminated in wild shooting and escalated to the escape, only the Witemer Brigade held out. The allied regiments, which had been able to deploy in front of the three columns, went resolutely towards the Prussians with the bayonet. Field Marshal von Hildburghausen personally presented the Piedmont regiment. However, 40 paces in front of the Prussian line, the Prussian artillery that followed made terrible gaps, and finally the attack was lost in peloton fire , especially in regiments No. 5 and No. 9 of the king. The formed allied regiments withdrew and finally fled, just like the rest of the Hessian troops on the right side of the column.

Seydlitz, who had again made ready after the first attack between Tagewerbe and Storkau, heard from his position the confusion among the enemy. With his two meetings, he attacked the allies who were already retreating on their right flank at around 5 p.m. The coalition troops, now seeing each other embraced, dispersed in complete dissolution and leaving behind most of the guns in the direction of Pettstädt. The retreating enemy was pursued by the Prussian cuirassier regiments No. 10 and No. 13 as far as Gröst and Obschütz.

Consequences of the battle 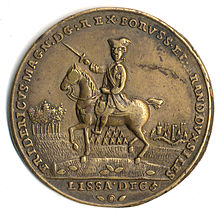 Bronze medal commemorating the battles near Lissa ( Leuthen ) and Roßbach, unsigned . Obverse : Frederick the Great, by the grace of God King of Prussia, Elector of Brandenburg, Duke of Silesia. Lissa, December 5th.

The immediate consequence of the battle, in which the allied Imperial Army and the French lost nearly 25% of their troops, was an enormous gain in prestige for Prussia. Major General Seydlitz became lieutenant general at the age of 36 and received the Order of the Black Eagle. Another consequence of the Prussian victory was the chaotic retreat of French troops towards the west. In the meantime, the Imperial Army rallied again and continued to take part in the struggle of the Imperial Austrians against Friedrich, but could no longer make a significant contribution to the military development of the war, which was not least due to its miserable economic constitution, although the main reason is certainly the inadequate one Motivation of the troops must cite: The majority of the soldiers came from the Protestant milieu (especially Saxons and Württembergians ) and therefore secretly felt sympathy with the Prussian monarch, who was generally recognized as a representative of the Protestant cause in Europe. The nimbus of the victorious Prussian army, its more modern training and catering situation also contributed in many cases to massive desertions, especially of members of the Imperial Army, to the Prussian flags.

In France itself, the voices in favor of a settlement of the conflict with Prussia grew louder. In particular, the former advocate of the war party, Foreign Minister François-Joachim de Pierre de Bernis , recognized the futility of further interventions on German soil and spoke out in favor of a peace treaty, which, however, was to bring his career at the French royal court to a quick end. The outcome of the battle at the same time nullified the recently achieved French success in the Battle of Hastenbeck and the subsequent convention of Kloster Zeven .

The imperial maneuver was carried out near Roßbach in 1903 in honor of the Battle of Roßbach.

The battle became, although its effects in the overall strategic context with regard to the European theater of war are to be qualified as minor (the main opponent was and remained Austria with its energetic Empress Maria Theresia ), an event of identification with the Prussian cause for all of Germany. The defeat of the French revived an all-German national consciousness that had faded at least since the tragedy of the Thirty Years War, at least (but not exclusively) on the Protestant side.

The enthusiasm for victory was not limited to Germany: In England and North America Friedrich was after the battle, which he himself had described soberly and arrogantly as a "walk" (in fact, the French army, in its desolate financial and moral condition at the time, was not particularly bad difficult hurdle for the Prussian battalions, who are used to fighting and victory), revered as an idol, if not adored, streets and inns were named after him, even in hostile Paris the long-cherished resentment of the opposition intellectuals about Voltaire and others (not among them few representatives of the higher and highest aristocracy) in enthusiastic expressions of sympathy for the Prussian monarch. Voltaire wrote new eulogies to his royal friend, and poems of homage celebrated the king as the new Caesar throughout Europe.

As early as 1766, with donations from the population, a 3.5 m high battle column was built and inaugurated as a memorial site on Janus Hill . In 1796 Prince Louis Ferdinand of Prussia visited the former battlefield, and a few weeks later a second monument was built on his behalf, again as a battle column about 200 m west on the hill. This was captured by Napoleon in 1806 and transported to Paris as a trophy. Its whereabouts are unknown. The first monument was dismantled by farmers in 1806 and the tablets were hidden from the French, but they were later lost. The third monument for the Battle of Roßbach was donated by Prussian officers in 1814 as a replacement for the battle column captured by Napoleon in 1806. The memorial was removed during the GDR era, its whereabouts are also unknown. The so-called “battle relief” is the fourth monument and was built in 1860 next to an inn on Janus Hill, it shows Borussia (or Victoria ) storming across the battlefield on a horse. The relief plaque of this monument was dismantled during the GDR era. From 1958 onwards, the entire Janus Hill fell victim to the ongoing brown coal mining operations; today there is a reconstructed monument with the battle relief in the village of Reichardtswerbe.