from Wikipedia, the free encyclopedia
Battle of Moys
Part of: Seven Years War 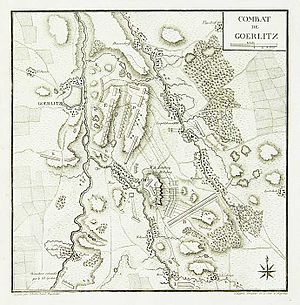 In the Battle of Moys on September 7, 1757 , Prussia suffered a defeat by Austria during the Seven Years' War .

The retreat of the Prussian army defeated in the Battle of Kolin was pursued by the Austrians under the leadership of Karl Alexander von Lothringen and Leopold Joseph Daun as far as Saxony .

The main army of the Prussians under the command of Duke August Wilhelm took up position at the state crown near Görlitz in Upper Lusatia. The corps with which Lieutenant General Hans Karl von Winterfeldt kept the connection between Silesia and Saxony open had occupied the Holzberg (Jäckelsberg) near the village of Moys on the right bank of the Lusatian Neisse .

The reason for the coming battle was the arrival of Count Wenzel Anton Kaunitz in the Austrian main camp near Jauernick , who wanted to discuss further plans of operations with the commanders-in-chief.

On September 7, 1757, General Franz Leopold von Nádasdy attacked the Prussian vanguard at Moys with 20,000 men and 24 heavy artillery. He took advantage of the fact that Winterfeldt was in the camp half a mile away near Görlitz at that time. When the news of the Austrian attack reached him, he hurried to the aid of his troops with five battalions. Despite the superiority, he initially beat the Austrians back. But since there were no further reinforcements by Duke August Wilhelm, Nádasdy was able to bypass the Prussians and attack in the rear. Winterfeldt suffered a fatal wound and died a day later. His corps eventually had to withdraw.

Due to the death of Hans Karl von Winterfeldt, Duke August Wilhelm lacked a capable adviser. In the next few weeks he withdrew steadily, while the Austrians pursued him with almost 90,000 men and cut off supplies . The retreat of the Prussians went through Lusatia and Silesia to the gates of Breslau . The fortress town of Schweidnitz and the Battle of Breslau were to be lost in November 1757 .