from Wikipedia, the free encyclopedia
Battle of Groß-Jägersdorf
Part of: Seven Years War

The battle of Groß-Jägersdorf on August 30, 1757 was a battle of the Seven Years' War between Russia and Prussia .

To defend East Prussia, Friedrich II had appointed the experienced General Field Marshal von Lehwaldt . 30,000 men were available to him. An army of almost 100,000 men under General Apraxin competed against him . At the end of June 1757, the Russians entered East Prussia head-on. In many cases there was devastation and looting. Memel fortress fell on July 5th. The three Russian columns then united in Insterburg on August 13th, but the armed forces thus formed were only 55,000 men and suffered mainly from the inadequate supply situation. Apraxin wanted to secure the Russian supplies by sea and therefore turned to Konigsberg on August 23 . The Prussians wanted to prevent the capture of this city at all costs. 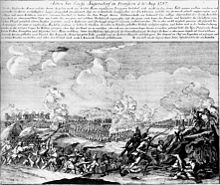 On August 30, 1757, Lehwaldt faced the Russians near the village of Groß-Jägersdorf . Although Apraxin had taken a firm position, which was secured in the back and flanks by natural obstacles, the Prussian Field Marshal decided to attack on the orders of Frederick the Great . Lehwaldt directed his thrust primarily on the enemy's left wing. The Russian cavalry and the first line of infantry were thrown back and three batteries captured. But the superior grape-shooting from the Russian artillery shook the ranks of the attackers. When Count Rumyantsev led 20 fresh battalions into action on the threatened left wing, Lehwaldt was unable to maintain the battlefield. After ten hours of fighting, the Prussians withdrew in good order across the Pregel River . Their loss amounted to 4,600 dead and wounded, and 28 guns were lost. The Russians lost 7,000 men.

The Russians could not use their victory to advance further west. Due to supply problems, they had to retreat backwards to Poland. Despite Lehwaldt's defeat at the turn of the year, East Prussia remained in Prussian hands.