from Wikipedia, the free encyclopedia
Battle at Chub
Part of: Seven Years War 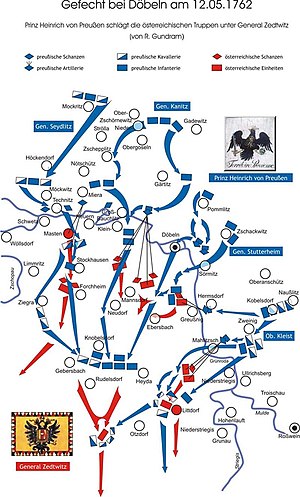 In the course of troop movements against the units under Prince Heinrich of Prussia at Döbeln and Nossen ( Katzenhaus position ), Austrian forces under Andreas Hadik von Futak ( General of the Cavalry ) advanced from the southeast to around the Freiberg Mulde in extremely poor weather conditions . In this context, a strong Austrian corps under the young Prince Albert of Saxony , he had received his first command here, also occupied the southern hills near Döbeln from November 14, 1761. The Prussians in the city therefore withdrew to the northern hills in front of the city.

The opposing artillery positions fired at each other between November 14th and 15th with a sometimes violent cannonade directly over the Döbeln in the valley. No major damage was done in the village itself. The civilian victim was the shoemaker Nikolaus Wetzig, in whose house on Staupitzberg (today Terrassenstrasse 3) an Austrian cannonball struck. This tore off both legs and he died on November 18, 1761.

After the Prussian side threatened to destroy Döbeln, negotiations began. These were led by Colonel von Kleist for Prussia and Colonel von Gemmingen ( Imperial and Royal Infantry Regiment "Wied-Runkel" ) for the Austrian side. After an agreement between the two warring parties, Döbeln was finally regarded as a neutral area and after November 15, 1761, all traffic over the Freiberg Mulde was stopped.

At the end of November, the troops moved into winter quarters in the surrounding towns and until May 12, 1762, there were only occasional minor military incidents. With great effort the river extensive field fortifications were from November 1761 on both sides built and the command of the battle section on the Austrian side took generalfeldwachtmeister baron Johann Anton Franz von Zedtwitz , the immediate superior of Zedtwitz was General Feldzeugmeister Graf Macquire in Freiberg .

The situation on the Freiberg Mulde threatened to become untenable for Prussia in the spring of 1762, because the Imperial Army near Chemnitz was striving to unite with the Austrian main army near Dresden and Dippoldiswalde . Prince Heinrich of Prussia should have left the field to these superior forces and further opposing operations in the direction of Wittenberg were to be expected. In order to advance between these forces in a preventive attack, Prince Heinrich first had to overcome the Austrian positions between Döbeln and Nossen on the Freiberg Mulde. The section at Döbeln seemed favorable to him for this.

The Austrian Commander-in-Chief in Saxony, Field Marshal Johann Baptist Graf Serbelloni , had to hand over troops to Field Marshal Leopold Joseph Graf Daun in Silesia , which is why the positions occupied in autumn 1761 were thinned out. In order to continue to guarantee his effectiveness, General von Zedtwitz wanted to concentrate his troops more closely at Döbeln. Like the request for sufficient reinforcement, this was not approved. Since it was assumed in the Austrian leadership that the strong positions would not be attacked in daylight and that there would be sufficient time for formation after an alert from outposts, Zedtwitz should only fully occupy his field fortifications at night and move to the quarters in the morning . The Prussian attack planning was based on precisely these conditions.

Oldest depiction of the battle near Döbeln (SB Jochai around 1763)

The plan provided for a surprise crossing of the Freiberg Mulde on May 12, 1762 on an approximately 8-kilometer front from 7:00 a.m. For this purpose, the Prussian troops took up positions undercover on the right side of the Mulde on the evening of May 11th. Supported by artillery, Generals Kanitz and Stutterheim would advance in two columns with line infantry in the Döbeln area. In a pincer movement, General von Seydlitz von Technitz and Colonel von Kleist von Mahlitzsch were supposed to grasp the enemy with cavalry and infantry on the wings and force them to retreat.

On the left wing of the Kleist column, however, this action had started an hour early because the Austrian outposts had seen the Prussians and there was an exchange of fire. After this had been noticed in the Prussian staff, the premature attack was finally carried out along the entire hollow line.

The surprised Austrians gave up their entrenchments and started to retreat and finally to flee. An effective defense against the extremely fast advancing Prussians was no longer possible. Only at Ziegra did the Seydlitz column face solid resistance from the field fortifications, which, however, was soon overcome by a large-scale bypass.

The Prussian troops took many prisoners in this situation, especially since the Kleist column had ultimately cut off the Austrians' ability to retreat to the south. Among the prisoners was the Austrian commander-in-chief, General von Zedtwitz, who had fallen into the hands of Kleist's units with his staff guards near Littdorf .

At around 9:00 a.m., Prince Heinrich was able to have the collection near Knobelsdorf , and on May 13, 1762, he withdrew with his troops towards Hainichen .

On the Austrian side, they were so upset at first that Serbelloni wanted to march off to Bohemia with the main power and Empress Maria Theresa even saw her troops defeated in Saxony and said she herself was "completely confused". Although the Zedtwitz Corps had been weakened by its own decisions, the Austrian leadership attributed the extensive defeat at Döbeln alone to the failure of General von Zedtwitz in the following days.

With the victorious advance at Döbeln the main Prussian goal was achieved and the unification of the Imperial Army and Austrians was prevented. This military action also successfully opened the Prussian campaign of 1762 in Saxony and prepared the ground for the last meeting of the war, the Battle of Freiberg on October 29, 1762.