from Wikipedia, the free encyclopedia
This is the spotted version , flagged on February 21, 2018 . There is 1 pending change that has yet to be viewed.
Siege of Olomouc
Part of: Seven Years War 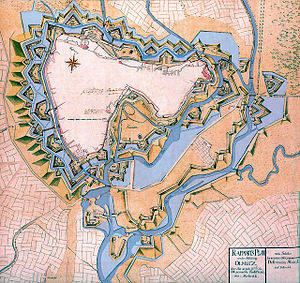 The siege of Olomouc was a central part of the Prussian spring offensive of 1758 under Frederick II as part of the Seven Years' War . It was planned as a decisive action against Austria . The actual siege lasted from May to June 1758. It ultimately failed due to the interruption of the Prussian supply line and the removal of a large Prussian supply convoy by the Austrians. Ultimately, Frederick II was forced to evacuate Bohemia and Moravia .

The campaign of 1757 ended with the Battle of Leuthen with a great success for the Prussians in Silesia. On December 20, 17,000 Austrian soldiers surrendered in Breslau . In April 1758 the conquest of Schweidnitz followed . Another 5,000 men surrendered.

At the beginning of the campaign of 1758 it became apparent that the British, who were allied with Prussia, would increase their military engagement both in the European theater of war and in the colonies. The April London Convention gave Prussia large amounts of British subsidies . Parliament also approved the sending of troops to the mainland. On the other hand, from the Prussian point of view, there was a danger that the Russians could intervene in the war with an army in the Brandenburg heartland. They invaded East Prussia at the beginning of the year . Due to the successes against the French, however, Frederick II had gained overall leeway that he wanted to use for an offensive approach. He was ready to leave his position in Saxony and seek the decision in Moravia. This was supposed to neutralize the Austrians. Friedrich hoped this way to free up forces for the fight against the Russians.

Frederick II began the campaign with an action against Olomouc in Moravia. The conquest of the fortress was intended to bind the main Austrian forces to the Danube. Prince Heinrich was supposed to protect the Prussian position in Saxony. After taking Olomouc, he was to advance towards Bohemia and take Prague . Dohna's army was supposed to defend the core areas against the Swedes and Russians. General Zieten was supposed to secure Lower Silesia.

Since 1740, Prussian armies had stood in front of Olomouc four times. The fortifications of Olomouc had been strengthened by the Austrians after the experiences of the previous war years. At first it had a rather weak garrison. But this was strengthened more and more and numbered about 7,500 men. It consisted of Austrian troops and units from other imperial estates. The citizens of the city were also armed. This had considerable ammunition and food supplies. It was commanded by the experienced Feldzeugmeister Ernst Dietrich Marschall von Burgholzhausen. Some of the residents had to leave the city to save food.

On April 29th the Prussian army marched into Moravia. The advance was delayed by a late onset of winter. The army did not reach the area around Olomouc until May 4th.

The actual siege was led by Field Marshal James Keith. This had a total of 11,000 men. But his strength was too weak to be able to completely enclose the entire city. It was therefore not possible to completely interrupt the supply of the city. During almost the entire period of siege, only two gates had to remain closed, two others could remain open and market activity was barely interrupted.

The opening of the first parallels began around May 27th. The siege trenches were driven by about 1,600 men. These consisted for the most part of soldiers and to a lesser extent of force-recruited farmers from the area. On the 30th the first parallel with six batteries of cannons and mortars was finished. On May 31st, the city was bombarded with 30 cannons, 16 mortars and 8 howitzers. The besieged responded with counterfire. In doing so, they at least temporarily destroyed the opposing main battery.

The actual siege lasted about a month. The besiegers finally got almost to the glacis . The outer works of the fortress were largely destroyed. Numerous buildings were also destroyed or badly damaged. In the end, the city was almost entirely enclosed. The defenders responded with numerous failures. The siege cost heavy losses on both sides. In addition to the troops, the city's residents were also badly affected.

On the Austrian side, the possible fall of the city sparked fears that the Prussians would advance towards Prague and Vienna. Parts of the court were already thinking of fleeing. Maria Theresa was determined to resist. In the meantime, after the defeat of Leuthen , the Prince of Lorraine had been replaced as Commander-in-Chief by Field Marshal Daun . Although the latter avoided a major battle with Friedrich, his troops were weakened by rapid raids and smaller skirmishes. It was also possible to get reinforcements through to Olomouc.

Due to the duration of the siege, the Prussians ran out of ammunition and supplies. Friedrich's success depended on the supply of supplies. A large transport destined for the siege army consisted of at least 3,000 wagons heavily covered under Zieten. He carried significant amounts of ammunition and food. There were also a million thalers in the transport. The convoy sometimes stretched over a distance of 40 kilometers. At Domstadtl this important convoy was ambushed by General Laudons on June 30th after the first fighting on June 28th . The Austrians did not attack in the usual order of battle, but rather used quick raids in the style of a small war . This confused the Prussian troops. Zieten then withdrew to Troppau . A small part of the convoy of around 100 cars reached Olomouc. Most of it fell into the hands of the Austrians. The Prussians lost large amounts of ammunition and food. Around 2,500 men were killed or taken prisoner in the fighting over the transport. In addition, 12 cannons were lost.

This loss of supplies forced Frederick II to break off the siege only two days later. He withdrew towards Bohemia. On July 13th he arrived in Königgrätz with the Prussian army . His hope to force Daun into battle was not fulfilled. The Austrians had well fortified positions. Out of these, they carried out attacks on Friedrich's supply lines with light troops. At the same time the Russians advanced in the east, so that Friedrich was forced to evacuate Bohemia and Moravia. In August the battle of Zorndorf broke out .