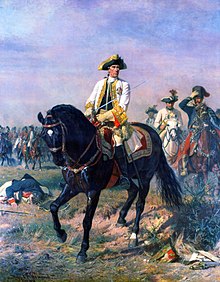 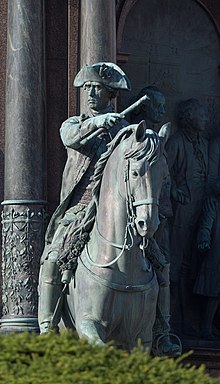 The Laudons family can be traced back to Livonia in the 15th century . Laudon himself claimed to be related to the Scottish noble family of the Earls of Loudoun, but this relationship is fictitious. In 1732, at the age of 15, he entered Russian service and in 1734 took part in the siege of Danzig during the War of the Polish Succession . In 1735 he moved with the Russian auxiliary troops to the Rhine and then back to the Dnepr , where he fought in the Russo-Austrian Turkish War from 1736 to 1739 . After the Peace of Belgrade he went to Saint Petersburg to complain about several incidents. When his complaints were not given in, he resigned from the Russian army.

After Friedrich II of Prussia refused his application to join the Prussian army, he entered Austrian service in 1742 . As a captain in the Croatian Freikorps von der Trencks , he was seriously wounded in 1744. Laudon was charged with disobedience and assaults by the Croatian Free Corps. He justified himself by the received orders and received a post as a major in the Liccan border regiment ( Lika region ).

He married and converted to Catholicism .

When the Seven Years' War broke out , he tried repeatedly to be deployed, but was turned away by Count von Neipperg, President of the Court War Council . It was only on Kaunitz 's recommendation that Laudon was sent to Bohemia as a lieutenant colonel with a division of the Croatian Freikorps to serve under Field Marshal Browne . After a successful operation during the retreat from Saxony near Tetschen , he was promoted to colonel for his participation in the attack on Hirschfeld in February 1757 . In 1758 he set up his own light force, the Loudon Volunteer Battalion , later called "Green Loudon Grenadiers".

After the Battle of Kolin , Laudon inflicted great losses on the Prussian General Keith on his retreat. After several months in command on the Elbe , in August he received command of the light Austrian troops in the Imperial Army , which he led into the battle of Rossbach . Promoted to major general, he captured a large Prussian wagon train near Domstadtl on June 30, 1758 , for which he was promoted to field marshal lieutenant in the Imperial Army .

For his service in the battle of Hochkirch he was awarded the Grand Cross of the Maria Theresa Order and received the title of baron . In the spring of 1759 he commanded a corps of 18,000 men on the Silesian border, which he united with the Russian troops under Pyotr Semyonovich Saltykov on August 3 . On August 12, 1759, as Commander-in-Chief in the battle of Kunersdorf , he defeated Frederick the Great and his Prussian troops. Then Laudon moved with the Austrian troops to Austrian Silesia and Moravia .

In 1760, after being promoted to Feldzeugmeister by Maria Theresia , Laudon was given command of the former Alt-Wolfenbüttel infantry regiment and a corps of 36,000 men that were supposed to advance into Silesia. Here he defeated General Fouqué at Landeshut on June 23 , stormed Glatz , but besieged Breslau in vain. On August 15, Laudon lost the Battle of Liegnitz , for which he blamed Leopold Joseph Graf Daun and in particular Franz Moritz Graf von Lacy , whom he viewed as his personal opponent.

After the war conference in Vienna was over , Laudon went to Silesia in March 1761 , where he commanded an army of 60,000 men independently of Daun's main army, which united with the Russians on August 12th. The combined troops were kept in check by a fortified Prussian camp near Bunzelwitz , but on October 1, Laudon succeeded in taking control of the city of Schweidnitz with a surprise attack. In 1762 Laudon received no further command.

In 1766 he was appointed to the court war council, in 1769 entrusted with the general command in Moravia and in 1778 appointed field marshal . When the War of the Bavarian Succession broke out , he faced Prince Heinrich of Prussia in Bohemia in March 1778 .

In 1776 he acquired Laudon Castle in Hadersdorf near Vienna, which he lived in until his death.

As a commander in Croatia he defeated the Turks at Dubitza in the 8th Austrian Turkish War in August 1788 and stormed Novi . In the campaign of 1789 he conquered Turkish Gradisca at the head of the Croatian-Slovenian army . During the illness-related absence of Field Marshal Andreas Hadik von Futak , he received supreme command of the main army, took Belgrade and Semendria on October 8, and successfully ended the campaign , appointed Generalissimo .

In 1790 he was given supreme command of the army that had drawn together against Prussia and died on July 14th in Neutitschein .

The symphony No. 69 by Joseph Haydn bears the nickname “Laudon” , based on a piano version by the publisher Artaria from 1784. WA Mozart's Adagio and Allegro in F minor (KV 594) for flute clock was written as funeral music for Laudon.

By the imperial resolution of Franz Joseph I. from February 28, 1863 Gideon Freiherr von Laudon was in the list of "most famous, to the everlasting emulation worthy warlords and generals of Austria" added to their honor and memory of a life-size statue in the general hall of at that time newly established kk Hofwaffenmuseums (today: Heeresgeschichtliches Museum Wien ) was built. The statue was created in 1864 by the sculptor Cyprian Godebski from Carrara marble and was dedicated by Emperor Franz Joseph himself.

Furthermore, in the Army History Museum, Hall II, there is a showcase in which Laudon's personal items are exhibited, such as his grand cross and breast star of the Maria Theresa Order , which Laudon was awarded for his bravery in the Battle of Hochkirch in 1758; his tricorn , sword and even his shaving kit . Above the showcase is a monumental oil painting with the equestrian portrait of Laudon, riding across the battlefield near Kunersdorf. It was painted by Siegmund L'Allemand in 1878 for the World's Fair in Paris. A bust made in 1812 is exhibited in the "Hall of Fame of the Germans" Walhalla . The Museo Storico Navale in Venice shows the head of the figurehead of an Austrian warship bearing Laudon's features (Inv. 3332: "Polena della fregata austriaca" Schwarzenberg "(ex Laudon) raffigurante la testa del Maresciallo Laudon").