The shaving (of lat. Rasura - scraping, scratching) is cutting the hair to just above the top layer of skin with a blade so that they are no longer felt. The hair is not removed, only shortened. With hair removal, also known as epilation , the hair root is also removed. As cave paintings show, people scraped their hair off 25,000 years ago with the help of sharpened stones and shells.

In addition, the erasing of writing and drawing and the area treated in this way on a writing / drawing carrier is also referred to as shaving .

In ancient Rome, the first shave was celebrated as a religious ritual. At this celebration, the boys gave up their children's toys and were shaved for the first time. The boy was then considered an adult.

The time of the first shave depends entirely on the individual development of the beard growth and personal preferences. Some boys start shaving when they are 13, while others don't start until they are 17 or later. It is also crucial whether the young men like the sparse beard fluff or not. The popular belief that shaving early leads to stronger beard growth is wrong. This error arises from the fact that the ends of the hair are no longer pointed after a shave and feel harder. 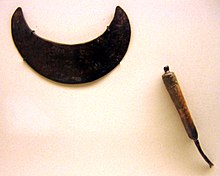 Early razors were made of cut flint, stone knives, clam shells, and shark's teeth. Archaeological finds of stone shaving scrapers date back to the 6th millennium BC. Known. Hard rocks such as flint or obsidian made it possible to manufacture much sharper blades than the soft metals available at the time. Bronze scrapers have also been found. The Egyptians used copper or gold knives in the 4th century. The Romans used pumice stone. In South America, however, the natives preferred to pluck their hair instead of shaving it.

Originally the razor blade was fixed, but as early as around 1550 BC. The first foldable knives are known. The folding razor was reintroduced in Sheffield in the 17th century . Razors of excellent quality subsequently came from the knife metropolises of Solingen and Sheffield . The wet shave of the beard hair was traditionally carried out at the barber with a razor . This profession has become rare in most cultures, but barbering is still practiced in the Arab world.

It was only with the invention of the mechanical razor ( safety razor ) with double-sided safety razor blades in 1901 by King Camp Gillette that it became possible to shave easily at home every day. During the First World War, these devices were used in large numbers by American soldiers to seal the gas masks used for the first time in an airtight manner. Hygienic reasons came later.

Traditionally, shaving soap , a shaving bowl , a shaving brush and an alum stick are used to soften the whiskers and to allow the blade to glide better on the skin . Some also use a magnifying shaving mirror .

In order to increase shaving comfort, the industry also offers shaving foam from the spray can . However, this does not achieve the thick creaminess and thus effectiveness in softening the whiskers of a self-foamed shaving soap or shaving cream from the tube. Alternatively, you can also use shaving oil. Polyphenols contained in shaving oil have an anti-inflammatory and astringent (contracting, hemostatic) effect. This is caused by the tannins contained in the oil . For this reason, tannins are also used in medicine as a hemostat and an antiseptic . Shaving oil can also be used as a pre-shave before applying the foam. After carefully scraping off the stubble with the razor and rinsing off the foam, an aftershave containing alcohol is usually applied to disinfect the micro-injuries and to apply a light scent. There is also alcohol-free aftershave for sensitive facial skin.

A basic distinction is made between inexpensive disposable razors and system razors in which only the blade blocks have to be changed. The mechanical razors of the first generation (planes) with the exchangeable double-sided razor blades, which are very cheap to maintain, but have become more difficult to obtain, are still available today.

When it comes to system razors, Gillette and Wilkinson Sword have been competing for the best wet shave in recent years, with inexpensive suppliers such as own-label drugstores following up with short delays. The number of blades has increased from two to a maximum of six, some of which are individually spring-loaded and are specially hardened and should slide easily. Furthermore, so-called moisture strips were first attached below and now also above the blades, and rubber strips are supposed to straighten the hair before shaving. The blade blocks themselves are pivoted in different directions. The main difference between the two manufacturers' products is that Wilkinson does not store the blades individually and instead provides the blade blocks with fine vertical wires, which is intended to reduce the risk of injury. Both manufacturers are now using battery-powered vibrations to support the shave in their top models.

Compared to system razors , planes and razors are more environmentally friendly and significantly cheaper to use, as the blade blocks of the system razor are only recommended for 8 to 12 shaves and are priced at around three euros each (as of mid-2019).

In 1898, John F. O'Rourke received a patent for an electric shaver (US Patent 616,554). The first dry razor was invented in 1915 by Johann Bruecker , a Danube Swabian who emigrated to the USA and worked there as a locksmith and mechanic. It worked with rotating blades powered by a mechanical wind-up motor. With the development of small electric motors in the 1930s, it became possible to develop electric razors for dry shaving. This has also been known as a safety shave because it does not use an open knife. The knife block is protected behind a shaving foil (blade). In 1937 the first handy electric razor by Jacob Schick (1878–1937) with an oscillating system ( oscillating armature motor ) was offered by the Remington company . In 1939 Philips followed with its own rotating 3-blade shaving system, which was invented by Alexandre Horowitz . The relatively expensive dry shave technique became widely accepted after the Second World War . In the 1980s and 1990s Grundig also sold razors with a 40 µm thick blade and an oscillating knife block. The most formative influence on the appearance of the modern dry razor is attributed to Roland Ullmann , who designed more than 100 razors for Braun and registered well over 100 patents in connection with machine razors.

Major suppliers of razors are currently Braun , Remington , Philips (Philishave) and Panasonic . While electric shavers used to be imprecise, they have now caught up with hand razors. Special models for women (“lady shavers”) are available. Skin irritation is usually less with electric shaving than with (wet) shaving by hand.

Before the electric shave, an alcohol-containing preshave can be applied to the face to straighten the whiskers and degrease the facial skin. Alternatively, shaving powder is available as a stick or in cans, which also degrease the skin.

Modern waterproof electric razors are also suitable for wet shaving and in this way combine the thoroughness and hygiene of wet shaving with the speed and safety of electric shaving. To improve hygiene, cleaning stations for razors are now widespread and are often sold together with the new device. In the cleaning stations, the shaving area of ​​the razor is stored in a mostly alcoholic liquid after use and, depending on the program, rinsed automatically or at the push of a button.