Glatz is a redirect to this article. Further meanings are listed under Glatz (disambiguation) .

Kłodzko [ ˈkwɔʦkɔ ] ( German Glatz [ ɡlaːʦ ]; Silesian Glootz ; Czech: Kladsko ) is the capital of the powiat Kłodzki in the Lower Silesian Voivodeship in Poland. It has 26,845 inhabitants (as of June 30, 2019). Until the 19th century Glatz was the capital of the County of Glatz , until 1945 the city belonged to the German Empire.

City panorama on the Glatzer Neisse

Minoritenkirche St. Mary of the built in the 14th century Gothic bridge (Brücktorberg) seen from

At the intersection of the pass crossings over these mountains, Kłodzko has a convenient location.

The Glatzer Neisse (Polish: Nysa Kłodzka ) flows through the town , from which the Mühlgraben ( Kanał Młynówka ) branches off. In the city area, the Reinerzer Weistritz ( Bystrzyca Dusznicka ) flow into the Glatzer Neisse from the left and the Hannsdorfer Wasser ( Jaszkówka ) and the Königshainer Bach ( Jodłownik ) from the right, and the stones ( Ścinawka ) north of the city from the left .

The Bohemian chronicler Cosmas of Prague first mentioned the settlement in 981 as castellum Kladsko . On the rocky hill on the left bank of the Neisse, well suited for defense purposes, the Bohemian prince Slavnik , father of St. Adalbert , had a wooden castle built against Poland. This castle and the associated Czech market town Kladsko were besieged and destroyed several times in the dispute between Bohemia and Poland. After Glatz came to Poland for a short time in 1114, Soběslav of Bohemia had the castle fortified even more in 1129 in order to secure the important Prague – Nachod – Glatz – Wroclaw road. The Pentecostal Peace of Glatz , which was concluded in 1137, ended the disputes and strengthened the affiliation to Bohemia. The first known Burgrave of Glatz was Hroznata in 1169, followed by Ryvín / Rivinus in 1175 and Witigone Witiko von Prčice in 1177 .

In the 12./13. In the 19th century, Glatz developed into the center of the up-and-coming Glatzer country thanks to German settlers who were called into the country by the Bohemian King Ottokar II. Přemysl . A walled village was built below the castle hill, which was already known as urbs ( city ) in 1114 . The Johanniter Hospital for 1183, the Johanniterkommende around 1243, the Wenceslas Church northwest of the castle for 1184 and the Marienkapelle on the Schlossberg for 1194 are documented. The German form of the name Glatz is first recorded for the year 1223. In 1275 Glatz received the status of a city under Magdeburg law . In 1334 the city acquired the municipal bailiwick and thus its own jurisdiction.

From the 14th century the craftsmen were represented in the city council. Of significance were at this time cloth making , the linen weavers , several other crafts, beer production and trade. The outstanding position of the city was demonstrated by the fact that all other cities in the Glatzer country were subordinate to it with regard to taxes and services until the 15th century.

Glatz was able to defend himself in the Hussite Wars and was largely spared from destruction. After the Bohemian King Georg von Podiebrad acquired the Kłodzko Land in 1454 and raised it to a county in 1459, Kłodzko became the capital of the county of the same name. His son, Duke Heinrich the Elder of Münsterberg , the first ruling Count of Glatz, moved his residence to the city of Glatz and converted the castle into a palace.

Between the 15th and 18th centuries

Glatz on an engraving from 1650 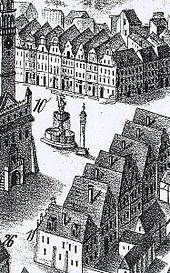 Glatzer Ring in the album Pompejus from 1737

During the Reformation Glatz was a center of the teachings of Schwenckfeld and other sects. In the 16th century, the Bohemian King Ferdinand I lifted the legal move to Magdeburg and made Prague the upper court for the towns of Kłodzko.

After the city council of Glatz recognized the election of the winter king Friedrich of the Palatinate and stood by him after the battle of the White Mountain , imperial troops occupied the city in 1622. They carried out punitive measures against the leaders of the battle and withdrew their privileges from other people . During the Thirty Years War , 930 of the then 1,300 buildings were destroyed. In addition to the devastation, there was a plague epidemic in 1635 , which killed 4,000 inhabitants, so that the city was largely depopulated. The plague raged again in 1680, causing 1,500 deaths.

During the Silesian Wars , Glatz was besieged and conquered several times. On January 8, 1741, the Prussians under Colonel Camas attacked the city, but they were repulsed. On January 9, 1742, the Prussians succeeded in taking the city; J. also the capture of the fortress. The Austrian counterattack took place in December 1744 under General Georg Olivier von Wallis ; in January 1745 the Austrians had to give up Glatz again. On July 26, 1760, Gideon Ernst von Laudon recaptured Glatz and the fortress after only eight days of siege. After the Peace of Hubertusburg in 1763, Glatz finally fell to Prussia. Despite the economic measures taken by Frederick the Great , the city only recovered slowly from the war damage , but at the end of the 18th century it was an important handicraft and trading center.

In the Napoleonic Wars during the Silesian Campaign , Glatz was succeeded by Friedrich Wilhelm von Götzen the Elder. J. to be defended and remained vacant.

Upper ring in Glatz around 1920

Plac Jedności during the 1997 flood

In the second half of the 19th century, the population increased significantly due to newly developed building areas. At the same time, Glatz Fortress lost its military importance and served as a prison for political prisoners. Glatz, however, remained a garrison town. The opening up of traffic by the railway (1874 to Breslau , 1875 to Mittelwalde , 1880 to Waldenburg , 1890 to Rückers , 1897 Seitenberg , 1902 to Bad Reinerz and 1905 to Bad Kudowa ) resulted in a significant economic boom. Around 1900 Glatz had two Catholic churches, a Protestant church, a synagogue , a high school with a Konvikt , a number of different manufacturing plants and was the seat of a regional court.

In 1945 Glatz belonged to the district of Glatz in the administrative district of Breslau in the Prussian province of Silesia of the German Empire .

Towards the end of the Second World War , Glatz was occupied by the Red Army in the spring of 1945 and shortly afterwards placed under Polish administration. The city was renamed Kłodzko . The immigration of Polish migrants began. The German population was subsequently expelled by the local Polish administrative authority . Most of the Polish migrants came from the areas east of the Curzon Line , where they had belonged to the Polish minority, which had fallen to the Soviet Union as part of the “ westward displacement of Poland ” .

During these years the city's industry developed above all. The population increased almost continuously until the turn of the millennium.

Often afflicted by floods , a flood of the century devastated the city in the summer of 1997 : within a few hours the Glatzer Neisse rose to a level of 8.71 m and flooded a large part of the city. With financial aid from the European Union after Poland joined the EU in 2004 and state funds, large parts of the old town were extensively renovated. Economic priorities at the beginning of the 21st century are trade, metal industry and the service sector.

Masonry of the ruins of the Glatz Fortress

Number of inhabitants to date

The planned city layout with a grid-shaped street network was built on the left bank of the Neisse below the castle hill. A city wall with a series of towers, several gates and gates surrounded the village. In 1349 the Prague Archbishop Ernst von Pardubitz initiated the establishment of the Augustinian Canons of Glatz . The citizens built the town hall in 1366 on the 9200 m² ring . The preserved bridge gate was built on the model of Charles Bridge in Prague in the last quarter of the 14th century. The construction of the parish church of the Assumption of Mary , which began in the 14th century on the site of a previous church , was completed around 1430. At that time, Glatz had around 250 houses and around 4,000 inhabitants.

Frederick the Great had the castle demolished in the second half of the 18th century. With that, the remains of the medieval Bohemian border and royal castle also disappeared. In their place, the craftsmen built what was then a modern fortress, which was closed as a military facility in 1877. Between 1880 and 1911 the city gates and a large part of the city walls were demolished and streets and green spaces were laid out.

After the Second World War , when housing was urgently needed, new residential buildings and a church were built west of the old town. Historical buildings in the old town, however, fell into disrepair (including the houses on the upper side of the ring) because the money for renovations was not available.

The city ​​coat of arms of Kłodzko shows a gold armored and crowned silver lion with a crossed double tail in red. Since the Kłodzko Land belonged to the Bohemian rulership and was elevated to a county in 1459, the coat of arms of which was two golden diagonal bars in red, the city has retained the symbol of its original membership of the Kingdom of Bohemia. The Bohemian lion appears in a large seal from the 13th century. It has been handed down to the present day. 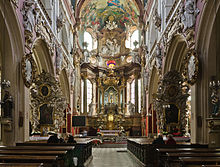 Interior view of the Parish Church of the Assumption

The Parish Church of the Assumption of the Virgin Mary ( Kościół Wniebowzięcia Najświętszej Maryi Panny ) was built from 1390 by the Prague Bauhütte from a legacy of the Prague Archbishop Ernst von Pardubitz on the site of a previous church and changed to Baroque style from 1624 to 1693. It is the most important place of Glatzer art and has a rich interior design, in which well-known artists were involved.
The main altar was made from 1728 to 1729 according to a design by the Tyrolean architect Christoph Tausch , who also designed the altarpiece. The carvings were made by the Bamberg-born sculptor Johann Albrecht Siegwitz . The miraculous image of the Virgin Mary in the middle of the aedicule was painted around 1475.
Michael Klahr the Elder Ä. created the Assumption Altar, the pulpit, the organ front and the confessionals.
The Ignatius Altar was created by Michael Kössler from 1712 to 1713 .
The Madonna with the Sparrow , which originally stood in the former provost church of the Augustinian monastery, is attributed to Peter Parler .
The tumba of Ernst von Pardubitz, who was buried in the Glatzer parish church at his request, is made of red marble. It was created between 1364 and 1370 by an artist close to Peter Parler. The cenotaph for the same ( kneeling marble figure ) was struck by the Berlin sculptor Johannes Janda in 1870.

The fortress Glatz , a former Bohemian castle was rebuilt in the 15th century to a castle and after the Thirty Years' War to a fortress. The fortress is located on a 369 meter high mountain on the northern side of the old town of Kłodzko.

The Bridge Gate Bridge ( Most świętego Jana ) is a stone arch bridge in the old town of Glatz, which was designed on the model of Prague's Charles Bridge and spans the city's Mühlgraben, a branch of the Glatzer Neisse. In the baroque period she received six stone figures as bridge decorations.

The city of Kłodzko is the administrative seat of the rural municipality of Kłodzko , but it does not belong to it as an independent municipality. The rural community has 17,142 inhabitants on an area of ​​252.25 km² (as of June 30, 2019) and is divided into 35 school administration offices.

They were held prisoner in the fortress of Glatz

The city is a member of the Federation of European Napoleonic Cities .