Lądek-Zdrój [ 'lɔndɛk' zdruɪ̯ ] (German Bad Landeck , before 1935 Landeck i. Silesia ) is a town in the powiat Kłodzki in the Lower Silesian Voivodeship in Poland. The spa is one of the oldest in Europe and the oldest in the former County of Glatz . 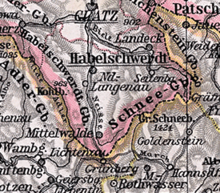 Landeck northeast of Habelschwerdt on a map from 1905

City panorama with the Reichensteiner Mountains in the background

The city is located on the Biele in the southeast of the Glatzer Kessel at 425-460 m above sea level. NHN , about 18 kilometers southeast of Kłodzko ( Glatz ). To the northeast are the Reichenstein Mountains , southeast the Bielen Mountains and southwest the Glatzer Schneegebirge . The border with the Czech Republic runs four kilometers to the east .

The municipalities of Lądek-Zdrój are:

From the foundation in the 13th century to the 18th century 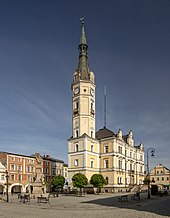 Town hall and town houses on the ring

Landeck was probably founded in the second half of the 13th century by the Bohemian King Ottokar II. Přemysl and is documented as a Bohemian royal town for 1294 . The spelling Landecke is documented for 1325, which corresponds to the geographical location on the southeastern border of the Glatzer country , with which it shared the history of its political and ecclesiastical affiliation. King Wenceslaus IV renewed and confirmed the city's previous privileges in 1392. Until 1443, Landeck belonged to the Karpenstein rule and then to the royal chamber or the respective pledges of the County of Glatz. The city, which had no city wall, was burned down in the Hussite Wars of 1428 and 1431. In the second half of the 15th century it was rebuilt by the sons of the Bohemian king Georg von Podiebrad , the dukes of Münsterberg , who were also Counts of Glatz. Economic development stagnated in the 16th century. During the Thirty Years War , Landeck was severely hit and economically destroyed several times. After the First Silesian War in 1742 and finally with the Hubertusburg Peace in 1763, it came to Prussia together with the County of Glatz . In 1765 a city ​​fire caused great damage.

At the beginning of the 19th century, Landeck experienced an upswing, the economic basis of which was craft businesses and small manufactories such as a wood pulp factory, a glove factory and agriculture. The most important economic factor were five thermal baths and a cold water sanatorium. After the Prussian King Friedrich the Great and members of his family had used the Landeck mineral springs for a spa treatment several times from 1765, the number of bathers and those seeking relaxation increased steadily. With the construction of the branch line Glatz – Landeck – Seitenberg , which reached Landeck in 1897, the economic development of the city and the spa was promoted. In the second half of the 19th century the city hospital, the neo-baroque post office and the stately villas on the street leading to the health resort ( ul. Zdrojowa ) were added. At the beginning of the 20th century, Landeck had a Protestant church, four Catholic churches and chapels, a preparation facility and was the seat of a local court .

Towards the end of the Second World War , Landeck was occupied by the Red Army in the spring of 1945 and after the war, like almost all of Silesia, was placed under Polish administration by the Soviet Union . The German place was renamed Lądek Zdroj . The immigration of Polish migrants began, some of whom came from areas east of the Curzon Line that had fallen to the Soviet Union and where they had belonged to the Polish minority. The German population was largely expelled by the local Polish administrative authority .

From 1975 to 1998 Lądek-Zdrój belonged to the Wałbrzych Voivodeship ( Waldenburg ). 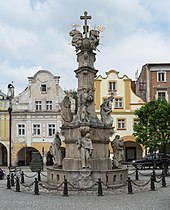 Trinity column on the ring

History of the bath

Albrechtshalle in the 19th century

The Landecker Bad, the oldest in the former County of Glatz and one of the oldest health resorts in Europe, developed in the Ober-Thalheim district. It lies east of the city and is climatically protected by the Reichenstein Mountains to the north and east. Little is known about the discovery of the springs. They were probably used from the 13th century. In 1428 the bathing facilities were destroyed by the Hussites and in 1470 by a flood. Based on a source investigation by the Viennese doctor Konrad von Berge, the co-owner of the County of Glatz, Georg I von Münsterberg , ordered the construction of a bathhouse ( Georgenbad ), next to it a residential house and a Georg chapel at the end of the 15th century . In 1501 he issued the first bathing regulations. In 1572 the city of Landeck acquired the Georgenbad, but left the newly discovered springs in private ownership due to lack of funds. In 1604 the first bathing brochure was published. Johann Sigismund Hoffmann von Leuchtenstern, who had acquired the property, built a second bathhouse ( Marienbad ) and several houses for spa guests in 1678 over the sulfur spring mentioned in 1625, and in 1688 the Marienkapelle. His grandson Leopold Graf von Hoffmann sold Marienbad in 1736 together with the villages of Ober-Thalheim, Leuthen , Voigtsdorf , Karpenstein and Heidelberg to the city of Landeck.

The number of bathers increased significantly after members of the Prussian royal family and other high-ranking personalities came to the bath for healing purposes. Minister of State Karl Georg von Hoym , who himself stayed in Landeck as a spa guest in 1782, took particular care of his development. In the 19th century, the baths and bathing facilities were expanded according to plan. In 1842, in the presence of Prince Albrecht of Prussia , his wife Marianne of the Netherlands and her family, the grand inauguration of the foyer located on the so-called morning promenade and named after Prince Albrechtshalle took place. This event gave the occasion to name the healing spring Mariannenbrunnen, connected to the hall by a corridor and covered with a glazed pavilion . In the German War of 1866, hotels and bathing facilities were used as hospitals for wounded soldiers. 1912 was radium -Emanatorium opened and Landeck to Radium Spa appointed. During the Second World War, the spa operations were partially restricted and the large hotels were again used as hospitals. The Kurhaus Marienbad also served as a maternal convalescent home around 1943/1944 , where German women from other places or large cities were brought to give birth.

The radium-containing sulfur springs are 16.5 to 29.6 degrees warm, the extremely strong spring discovered in 1972/73 even 43.9 degrees. They are used for drinking cures and baths and are prescribed in particular against rheumatism, gout, joint and gynecological problems as well as age disorders.

Important buildings in the bathing district 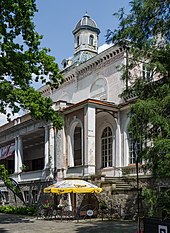 The city forest, in which over 35 kilometers of hiking trails have been laid out, is directly adjacent to the bathing district. They lead, among other things, to the forest temple built in 1786 and demolished in 1960 , in which King Friedrich Wilhelm III. and Tsar Alexander met, and to the Dreieckerfels ( Trojak ) lookout point and the Karpenstein castle ruins .

A center of church art

After Michael Klahr the Elder Ä. In 1724 he founded a large sculpture workshop in Landeck, which was run by his son Michael Klahr the Elder. J. was continued, Landeck developed into an important center of church art. The most famous carvers from Landeck as well as church and art painters include August Klein, Franz Thamm and his sons Franz, Paul and Adolf, Aloys Schmidt as well as Wilhelm Reinsch and Leo Richter.