The city is located in Lower Silesia in the Glatzer Kessel , at the foot of the Habelschwerdter Mountains and on the left bank of the Glatzer Neisse ( Nysa Kłodzka ) at the confluence of the Weistritz ( Bystrzyca ) at an altitude of 330 m above sea level. The distance to the northern district town of Kłodzko (German Glatz ) is 20 kilometers. 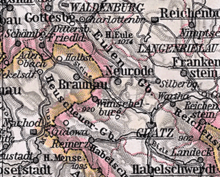 Habelschwerdt southeast of Neurode and Glatz on a map from 1905.

View of the old town 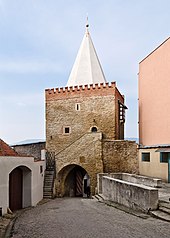 The year Habelschwerdt was founded is not known, but it is placed in the second half of the 13th century, as it is believed that the name is derived from Gallus von Lemberg (Czech: Havel z Lemberka ), whom the Glatzer Land came from around the middle of the century and who was married to Zdislava, who was canonized in 1995 . It was founded by German settlers next to the Slavic village of Bystritz (Czech: Bystřice ). The political and ecclesiastical relations of rule in Habelschwerdt are largely identical to the history of the former County of Glatz , to which it belonged , until modern times .

After a city wall had been built under Vogt Jakob Rücker, King John of Bohemia awarded Habelschwerdt the status of a Bohemian royal city in 1319 . The privilege was renewed by Johann's son Charles IV in 1348. In the same year, in his capacity as King of Bohemia, he acquired the hereditary bailiwick, making the later bailiffs royal officials. The Habelschwerdt district , which has existed since then, comprised the south of the Glatzer country.

Due to its location on the old trade route from Breslau via Glatz and Mittelwalde to Vienna, which led diagonally across the Ring, Habelschwerdt gained economic importance. It developed into an artisan town, especially the cloth makers and linen weavers . A fulling mill is documented for 1319 and the guild of drapers for 1397 . In 1381 the Antonius Hospital was founded with a church in front of the Niedertor , and a leper hospital in 1399 in front of the Glatzer Tor .

In the Hussite Wars , the city was largely destroyed in 1429 and sacked in 1469 by the Silesians who fought against the Bohemian King George of Podebrady , who stood on the side of the Hungarian King Matthias Corvinus . After a city fire in 1475, the city was rebuilt. During the Reformation , the population turned primarily to the radical Reformation Schwenckfelders and Anabaptists (partly as Gabriels ), after their ban in 1548 to Lutheranism . From 1563 to 1576 the Lutheran preacher Caspar Elogius worked at the parish church. In 1586 the city acquired the royal mill and the imperial customs, and around 1600 additional lands. In the years 1604 to 1617 she had the bailiwick rights and in 1617 the higher judiciary.

During the Thirty Years War the city was sacked by the Swedes. In the course of the Counter Reformation , the population had to return to the Catholic faith in 1628/1629 or to emigrate. In 1646 large parts of the city burned down, another fire in 1703 destroyed almost two thirds of the houses within the walls.

During the Second Silesian War , Hungarian troops and Trenck's Pandours pillaged the city. Immediately in front of the city on February 14, 1745 the Prussians under Johann von Lehwaldt won over the Austrians under General Franz Wenzel Graf von Wallis in the battle near Habelschwerdt . After the Peace of Hubertusburg , Habelschwerdt fell to Prussia in 1763, together with the County of Glatz .

During the War of the Bavarian Succession , on January 18, 1779, an Austrian corps under Dagobert Sigmund von Wurmser defeated the Prussians near Habelschwerdt and made many prisoners.

From 1818 Habelschwerdt was the seat of the district of Habelschwerdt , which had been formed from the districts of Habelschwerdt and Landeck . After cloth-making and linen weaving lost their importance in the 19th century, the wood industry developed from 1860 onwards, which led to the establishment of three match factories. Habelschwerdt also gained importance as a school town. From 1766 to 1776 and from 1871 to 1925 it housed the Catholic school teachers' college, for which a neo-renaissance building was built in 1872 . The further economic development was positively influenced from 1875 with the railway connection of the Glatz – Habelschwerdt – Mittelwalde line . At the beginning of the 20th century, Habelschwerdt had two Catholic churches and a district court. In 1930 Habelschwerdt acquired the Grafenort estate with extensive forest holdings.

At the end of the Second World War , the Red Army captured Habelschwerdt in 1945 . In March 1945 the Soviet Union , like almost all of Silesia, placed it under the administration of the People's Republic of Poland . Habelschwerdt received the Polish place name Bystrzyca Kłodzka . The inhabitants were expelled and replaced by Poles , some of whom had belonged to the Polish minority in the areas east of the Curzon Line that had fallen to the Soviet Union .

From 1975 to 1998 Bystrzyca Kłodzka belonged to the Wałbrzych Voivodeship ( Waldenburg ).

The city was used by the Polish director Kazimierz Kutz as a filming location, including for his film Nikt nie woła , German Nobody calls (1960). 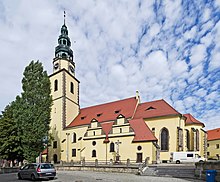 Town hall on the ring with the Trinity column

The following districts belong to the urban and rural community of Bystrzyca Kłodzka:

in chronological order of their dates of birth: