Michael Klahr the Elder Ä. was the son of a cottager . After his talent was discovered and promoted by Paul Stralano, the rector of the Glatzer Jesuit College , the Vienna-born sculptor Karl Sebastian Flacker took on his training. For study purposes, Klahr also drew the groups of statues on Charles Bridge in Prague based on the engravings by August Peter Neuräutter ( statue pontis Pragensis, Prague 1714 ).

Klahr's works, which were influenced by the important Bohemian sculptor Matthias Bernhard Braun , are of high artistic standing and are among the best of their time in their design. Nevertheless, his work was limited to the Glatzer country .

He created most of his works in wood, e.g. B. Altars, confessionals, church doors, pulpits, sculptures of saints and Madonna, nativity scenes and the well-known organ prospect in the parish church of Glatz. It is assumed that he used images by the Roman artist Andrea Pozzo for the design of the confessionals for the parish church in Glatz , which were presumably conveyed to him by his student Christoph Tausch , who at the same time created the high altar. Several of his works, which were compiled in a list in 1931, can no longer be found today.

In 1723 he married Catharina Mühlan and in 1724 founded a large sculptor's workshop in Bad Landeck, which was still in operation in the 19th century. Through his work he was soon very respected and became a council member of the city of Landeck. The son Michael, born in 1727, also became a sculptor and known as Michael Klahr the Younger . 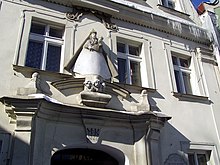 Lądek-Zdrój : Klahr's house on the southwest corner of the ring - the Madonna of the Protective Coat