Jumping foal (1940) in the Lameygarten Mannheim

Daphne figure by Renée Sintenis in the community gardens (Lübeck)

Memorial plaque on the house at Innsbrucker Strasse 23, in Berlin-Schöneberg

As the first of three children of the married couple Elisabeth Margarethe Sintenis, née Friedländer, and Franz Bernhard Sintenis, a lawyer, Renate Alice grew up in Neuruppin until 1905 . Her daily proximity to nature influenced her later artistic work.

Her family name is of Huguenot origin (Sintenis is derived from Saint-Denis ). She spent her childhood and youth in Neuruppin, where the family had moved in 1888. After a short stay in Stuttgart , the family moved to Berlin in 1905, where the father had received a job at the higher court .

Renate Sintenis received drawing lessons while she was still at school, followed in 1907 by studies in decorative sculpture at the teaching facility of the Museum of Applied Arts in Berlin with Wilhelm Haverkamp and Leo von König. In the fifth semester, she dropped out of studies to work as his father's secretary on the instructions of her father. She withdrew from this unwanted activity by breaking with her family, which caused severe problems ( depression ) for her for a long time .

When Renée Sintenis (as she called herself from then on) met Georg Kolbe in 1910 , she became his model. A life-size woman statue, no longer preserved, was created.

Inspired by this activity, she began to create female nudes, expressive heads like those of André Gide and Joachim Ringelnatz , athletes like the Finnish runner Paavo Nurmi and self-portraits in drawings, sculptures (in terracotta ) and as etchings.

After 1915 the concise animal figures emerged, which became her artistic life theme. Since she rejected the monumentality in sculpture, she mainly created small-format sculptures. These narrow works of art such as horses, deer, donkeys and dogs enjoyed great popularity with the public because they fit in every handbag, were suitable as gifts and could be found in small rooms.

From visiting Kolbe's studio, a long-term friendship developed, which he accompanied artistically. In the 1913 Berlin autumn exhibition, the first major exhibition of the Free Secession , Renée Sintenis took part (as in the following years) with small-format plaster sculptures. From 1913 onwards, she had her works cast in the Hermann Noack fine art foundry , which she received artistically for decades.

Because the Berlin Secession is in the immediate vicinity of the Romanisches Café and the studio of the society photographer Frieda Riess , Renée Sintenis got access to well-known personalities. The writers Rainer Maria Rilke and Joachim Ringelnatz belonged to her circle of friends . The artist often drove through the city in her open car with both friends, which made her famous. Ringelnatz wrote a number of loving and tongue-in-cheek poems. For him she designed the grave slab from shell limestone ; the tomb is in the Berlin forest cemetery on Heerstrasse .

In 1917 she married the type artist, book designer, painter and illustrator Emil Rudolf Weiß , whom she had met years before as her teacher and then as a fatherly friend. He supported her and introduced her to numerous other artists. Their collaboration was limited to a few joint projects, of which the edition 22 songs of the poems by Sapphos , for which Sintenis created the etchings and Weiß made the font designs, achieved particular fame.

Before Sintenis' works were exhibited by the gallery owner Alfred Flechtheim in Düsseldorf in 1920 , she was represented by the gallery owner Wolfgang Gurlitt in his gallery Fritz Gurlitt . She has exhibited her sculptures regularly since 1913 and was highly valued by her colleagues from the Free Secession, the most important Berlin artists' association. a. by Max Beckmann , Max Liebermann and Karl Schmidt-Rottluff . The opening of a gallery in Berlin in 1922 made her the most important protagonist of the well-known Flechtheim art circle in those years. The public interested in art was infatuated with their athletic figures, the portraits of friends and the small-format self-portraits.

During the Weimar Republic , Renée Sintenis became an internationally recognized artist with exhibitions in the Berlin National Gallery in Berlin , in Paris , the Tate Gallery London , in the Museum of Modern Art New York , Glasgow and Rotterdam , whose creations of small-format bronzes, young animals , Depictions of athletes (boxers, soccer players, runners) and portrait busts of their circle of friends were found in public and private collections worldwide.

In 1928 Sintenis won third prize in the sculpture section of the art competition for the Summer Olympics in Amsterdam . Renée Sintenis took part in the 1929 exhibition of the German Association of Artists in the Cologne State House with five small-format animal sculptures . In 1930 she met the sculptor Aristide Maillol in Berlin. In 1931 she was appointed as the first sculptress (and second woman after Käthe Kollwitz ) together with 13 other artists to the Berlin Academy of the Arts - Fine Arts section, although the National Socialists forced her to leave in 1934.

Due to her body size, her slim figure, her androgynous charisma, the self-confident, fashionable demeanor and her beauty, she was often asked to be portrayed, so that she was often portrayed by Emil Rudolf Weiß and Georg Kolbe , the photographs, etc. a. by Fritz Eschen and Frieda Riess have been published frequently. She embodied the 'new woman' type in an excellent way, even if she appeared rather reserved.

Emil Rudolf Weiß was dismissed from his university post on April 1, 1933 because of an angry statement against the Nazi regime and the law to reintroduce the civil service. Sintenis herself was excluded from the Akademie der Künste in 1934 because of her Jewish origins - her maternal grandmother was Jewish before her conversion ; Nevertheless, she was able to stay in the Reich Chamber of Culture , even if works by her were removed from public collections by the National Socialists.

During the dictatorship of the National Socialists Renée Sintenis and her husband Emil Rudolf Weiß lived with considerable restrictions and withdrawn. She continued to exhibit, although one of her self-portraits was shown in the Degenerate Art exhibition in Munich in 1934. Since she was not banned from exhibiting, she was represented in Düsseldorf by the art dealer Alex Vömel , Flechtheim's successor. In contrast to her time in the 1920s, she was not doing well financially, which was reinforced by the bronze casting ban of 1941.

Until the forced dissolution of the DKB in 1936, Renée Sintenis remained a member of the German Association of Artists. That she was sponsored by the NSDAP propagandist Hans Hinkel , as was later claimed, has not been proven and is highly unlikely.

“All power corrupts. The spiritual person must therefore always live in opposition. "

On November 7, 1942, Emil Rudolf Weiß died surprisingly in Meersburg on Lake Constance . His death plunged Renée Sintenis into a deep crisis. As a result, she took over his studio in the Künstlerhaus in Kurfürstenstrasse . There also worked Max Pechstein , whose family, the artist temporarily resumed when her atelier in 1945 by arson and several Allied bombing destroyed. Renée Sintenis lost almost all of her possessions; all papers and parts of her work were lost. While most of the cast models were preserved, the plaster frames of most of the portrait heads were also destroyed. In a self-portrait mask from 1944, the hardships of the war years are visible in their features.

After the war, Renée Sintenis and her partner Magdalena Goldmann moved into an apartment on Innsbrucker Strasse in 1945 , where they both lived until their deaths. In 1948 Renée Sintenis received the art prize of the city of Berlin and was appointed by Karl Hofer to the Berlin University of Fine Arts , where she was appointed full professor in 1955, although she gave up teaching in the same year. In the same year she was appointed to the newly founded Akademie der Künste Berlin (West). 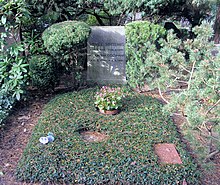 In the 1950s it became very successful again. She stayed true to her artistic focus and motifs, which she called "making animals". A number of statuettes of young men were added. In 1957 Sintenis' statue of the Berlin Bear was erected as a life-size bronze sculpture on the median of what is now the 115 federal highway between Dreilinden and the Zehlendorf interchange . The then Governing Mayor of Berlin , Willy Brandt , inaugurated another copy on September 23, 1960 on Berliner Allee in Düsseldorf. On June 6, 1962, a bronze monument of the Berlin Bear was unveiled in the median of the Federal Highway 9 at the current junction Munich- Fröttmaning- South. A small sculpture of this work is awarded annually as a Silver Bear or Golden Bear to the winners of the International Film Festival (Berlinale).

On her 70th birthday in 1958, the Haus am Waldsee in Berlin dedicated a retrospective to the impressive artist .

Renée Sintenis died on April 22, 1965. Her grave is in the Waldfriedhof in Berlin-Dahlem , Dept. 24B-12. The grave is one of the honor graves of the State of Berlin.

She was presented with prestigious awards, such as the Great Federal Order of Merit (1953). She was proposed for the order Pour le Mérite in 1952.