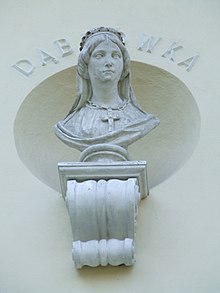 Bust of the Duchess Dąbrówka, Palace of Julian Ursyn Niemcewicz in Ursynów , Warsaw

Dubrawka was the daughter of Duke Boleslav I of Bohemia . Your date of birth is unknown and cannot be narrowed down more precisely than the period between the years 929 and 953.

In 965 (according to older information 963) she married the Polish Duke Mieszko I , who renounced his old faith during the wedding, was baptized and converted to Christianity . This marriage bound the Slavic duchies of Bohemia and Poland closer politically. A later historical tradition ascribes Dubrawka to the building of some churches in Poznan and Gniezno . She is also said to have been involved in the establishment of the first Polish diocese in Poznan in 968.

From her marriage to the Polish duke I. Mieszko come