Sigrid the proud (also Gunhild (a) , Sigrid Storråda , * around 965 , † after 1014 ) is a person who appears in many Nordic sagas and historical chronicles . It is not known whether this was a real person or a fictional one, in which the résumés of various real people were combined.

She is said to have been married to the Swedish King Erik the Victorious around 985 in order to counter the alliance of the Danes with Obodrites and Liutizen against the Holy Roman Empire and the Piasts . She gave birth to two sons, of whom Olof Skötkonung later became King of Sweden.

When her husband Erik died in 995, she is said to have married the Danish King Sven Gabelbart . From him she became the mother of the Danish kings Harald II and Canute the Great as well as three daughters, one of whom was named Santslaue after her mother ( Latin ) .

The information from Scandinavian sources that she was of Swedish origin differs from reports from other chroniclers who assumed she was a Slavic .

The Nordic sagas tell of Sigrid that she was a daughter of the powerful Viking Skoglar Toste from Västergötland . She married Erik the Victory and later divorced him. The reasons for this are presented differently in the various sagas. After the separation she ruled with her second son, Emunde , over Västergötland ( Gautland ). As ruler of this area, she was sought after by less important sub-kings of the surrounding areas who wanted to marry her. Two particularly eager applicants, Harald Grenske, the father of the Norwegian King Olav II. Haraldsson , and Vissevold , who was presumably a Russian prince, had her burned in her hall, in order - as she said - to discourage petty kings from coming to her in the future and to hold her hand. 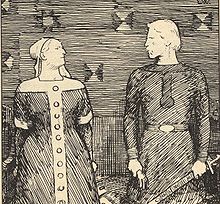 Sigrid and Olav Tryggvasson, imaginative woodcut by Erik Werenskiold from 1899.

After this act of violence, the other sub-kings knew that they had better not undertake similar attempts, and Sigrid was nicknamed Storråda ("the proud" or "the haughty"). The legends go on to say that Sigrid was not averse to marrying the Norwegian king Olav Tryggvason . However, she was not ready to accept the Christian faith. This led to an argument between Olav and her, which turned into bitter enmity. Instead, Sigrid is said to have married the Danish King Sven Gabelbart , who, at her insistence , took action against Olav Tryggvasson together with her son Olof Skötkonung , who was now King of Sweden, whereupon Olav perished in the battle of Svolder .

In the Icelandic sagas and in Saxo Grammaticus it is only noted that Sigrid and Sven Gabelbart had the daughter Estrid , who in turn was the mother of the Danish king Sven Estridsson . Harald II and Canute the Great are not mentioned in the description of this marriage.

One possible explanation is that Sven Gabelbart was married twice, first to Sigrid Storråda and later to Świętosława or Gunhild von Polen, described below .

Various chronicles state that Canute the Great had a Polish mother or that she came from a closely related sex.

According to Thietmar von Merseburg , Knut's mother is said to come from the marriage of Duke Mieszko of Poland from the Piast house with Princess Dubrawka of Bohemia , but Thietmar does not give her name. He is generally considered to be the best-informed medieval chronicler, as he was in personal contact with many of the events described and was also well informed about events in Poland and Denmark . Thietmar does not report that this queen was previously queen in Sweden.

Adam von Bremen names a Polish princess as the wife of Erik the Victory and goes on to report that she was also the mother of Harald II and Canute the Great. In a later part of his work he calls her Gunhild . Some historians therefore took the view that Sigrid Storråda was an invention of the Nordic sagas. Today it is mostly assumed that Adam was subject to a misunderstanding when he merged the Sigrid and Gunhild into one person. That Sigrid was a real person is also supported by the fact that the Danish possessions in Sweden were called " Syghridslef " (Sigrid's genetic material).

The Slavic first name Świętosława is mainly based on an inscription in the work Liber vitae of the New Minster and Hyde Abbey , Winchester, where it is noted that Canute the Great had a sister with the Latin name Santslaue (the text is " Santslaue soror CNVTI regis nostri "). It was also assumed that this woman was named after her mother.

This queen's marriage to Sven Gabelbart did not last long. She was cast out by him and had to return to her Slavic homeland until she was brought back by her sons after they had taken power in Denmark after their father's death. It is noteworthy that she did not travel to Sweden, which several commentators believe she would have done if she had been the mother of Olof Skötkonung.

In a volume of the English work Encomium Emmae Reginae it is reported that Canute the Great went to the land of the Slavs to bring his mother to Denmark. However, it is not claimed here that she was also a Slavic.