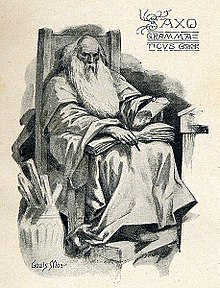 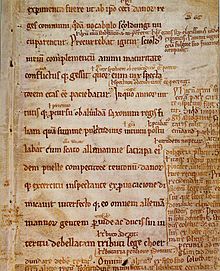 Saxo Grammaticus (* around 1160 ; † after 1208 ) was a Danish historian and clergyman. Because of his polished, correct Latin , which was no longer common in the High Middle Ages , Saxo was nicknamed "Grammaticus".

Saxo came from an upper-class family and studied in northern France. He entered the service of Bishop Absalon von Lund and accompanied him as a clerk on the Danish war journeys. From 1185 onwards, at the instigation of Bishop Absalon, Saxo wrote the Gesta Danorum , a 16-volume history of Denmark in Latin. He could use the library of the Archdiocese of Lund .

The Gesta Danorum (“The Deeds of the Danes”), also known as Historia Danica (“Danish History”), is the most important Danish historical work of the Middle Ages and at the same time a means of national identification. The work has been completely preserved in a single print (Paris 1514). There are also eight pages with handwritten additions from Saxo's original manuscript. The historian Anders Sørensen Vedel wrote the first translation into Danish in 1575 .

The Gesta Danorum consist of 16 books. The first eight books are devoted to the pagan and largely legendary prehistory, while the last eight books deal with the Christian period. The representation is linked by the Danish kings. Saxo names a legendary King Dan as the first king. The depiction ends with the year 1185 and the submission of the Wende prince Bogislaw under Canute VI.

For a long time, older research assumed that at least in the first nine books of his work, Saxo mainly resorted to myths from the Norse heroic sagas and heroic songs: Deities occur repeatedly, especially Odin , so that the Gesta Danorum primarily serves as a supplement the Edda were seen. In recent times, however, there has been an increasing tendency to believe that Saxo reproduces actual history from the third book at the latest, although not always in a sub-tendency and not without "explaining" incomprehensible developments through the intervention of the gods.