The EU pet passport is a document based on a uniform template with which an animal keeper must prove when crossing borders within the European Union that a dog , cat or ferret kept as a pet and to be moved across the border has the necessary health measures , which regularly includes effective vaccination against rabies . The card is issued by authorized veterinarians ; In Germany, all veterinarians can obtain this authorization on application. The EU pet passport must be clearly assigned to the animal, for this purpose the animal must be identifiable by means of a microchip (ISO standard 11784 or 11785) or a tattoo affixed before July 3, 2011, and the identification number must be entered in the passport.

The individual identification number must be on the cover and on each data-bearing page of the EU pet passport. This number is made up of the code of the member state - for example DE for Germany - a company code (for example 02) and the sequential number. The printed inner parts of the pass must be available in the official language or languages ​​of the issuing country and in English.

For the first time, Regulation (EC) No. 998/2003 of May 26, 2003 on the veterinary conditions for the movement of pets for non-commercial purposes and amending Directive 92/65 / EEC, regulates the introduction of an identity card for pets, cf. Art. 5, 17 VO 998/2003. According to the recitals of the regulation, the aim was to harmonize the conditions under which pets may be moved across EU borders (recital 1), with an explicit regulation only taking place with regard to rabies . Due to the significantly improved rabies disease situation in all Union countries, the United Kingdom and Sweden were also prepared to agree on the compromise set out in the regulation and to give up their national quarantine regulation, at least after a transitional period, in favor of the stipulated vaccination solution (cf. Recitals 3 and 4 of the Regulation). With regard to rabies protection, the guideline stipulated that up to 5 dogs, cats or ferrets that were kept as pets must have effective rabies vaccination protection and must be documented in an identity card issued by one of the competent authorities an authorized veterinarian. According to Art. 4 of the regulation, a "clearly recognizable" tattoo or an "electronic identification (transponder)" according to ISO standard 11784 or 11785 was required for identification for a transitional period of eight years. For the movement of pets to Ireland, Malta, Sweden and the United Kingdom, the ordinance provided for a transitional period until June 30, 2010, during which these countries could also request a blood test with titer determination (cf. Art. 6 of the ordinance) .

The ordinance did not provide for a specific model for the required ID, in particular the designation "pet ID" or "EU pet ID" does not appear in the ordinance. However, the regulation contained in Art. 17 the request to the Commission to define a corresponding model for the member states, which they did with the decision of the Commission of November 26, 2003 laying down a model ID card for the movement of dogs, cats and ferrets between member states , 2003/803 / EG, also did and thus created the EU-standard "pet passport".

With Regulation (EU) No. 576/2013 of June 12, 2013 on the movement of pets for non-commercial purposes and repealing Regulation (EC) No. 998/2003 , the previous law was revised with effect from December 29 2014. However, the changes in the matter were not serious for pet owners in EU traffic. In recital 22, however, it was now stated that "the conditions for the issue of ID cards and the rules for their content, validity, security features, format and design [should] be laid down." In Art. 3 lit. f.) of the regulation followed the definition of the pass described as

" ID card means a document drawn up in accordance with the model set out in implementing acts to be adopted pursuant to this Regulation, which enables the pet to be uniquely identified and its health status checked for the purposes of this Regulation;"

In Article 21 of the regulation, the precise contents were then specified and in paragraph 2 the authorization of the Commission to define a template to be used by means of an implementing regulation, which this is to be said in the implementation regulation (EU) No. 577/2013 OF THE COMMISSION of 28 June 2013 Model identification documents for non-commercial movements of dogs, cats and ferrets, for drawing up the lists of territories and third countries and for specifying the requirements for format, layout and language of the declarations confirming compliance with certain conditions under Regulation (EU) No. 576/2013 of the European Parliament and of the Council immediately followed.

Procedure for issuing and further entries

Issuance of the EU pet passport

Data to identify the animal

All officially authorized veterinarians in the EU can issue and continue to use the EU pet passport, regardless of the animal owner's place of residence and habitual residence of the animal.

For the issuance of an EU pet passport according to Art. 22 Reg. 576/2013 the following procedure must be followed:

Dates must always be given with the day and a four-digit year. Attaching a photo is voluntary, as is the provision of other useful information on the health of the pet.

An authorized veterinarian can make further entries in an EU pet passport issued according to the procedure described above, in particular on vaccinations, parasite treatments and titer determinations. If information is introduced by means of stickers (e.g. stickers from vaccines), these must be protected against peeling during the rabies vaccination or laminated with a transparent self-adhesive film by the veterinarian.

The EU regulations stipulate that the EU pet ID cards may only be issued by veterinarians who have been officially authorized to do so. The authorization procedure is not standardized in Germany. In some federal states (e.g. Baden-Württemberg and Lower Saxony) a blanket authorization applies, in others (e.g. Thuringia) the authorization is granted upon application to the competent authority. With the official legitimation for issuing the pet ID cards, the veterinarian assumes full responsibility for the correct completion of the official document. In the event of violations of the provisions, the veterinarian's authorization can be withdrawn.

For the pet passport, the costs for other veterinary measures are calculated according to the fee schedule for veterinarians (GOT). Identity verification (reading the microchip or tattoo) is always part of the service. The minimum fees according to GOT (dated June 30, 2008) are € 5.74 for reading the microchip (or tattoo) and € 6.88 for the vaccination certificate (if necessary, transferring from the old vaccination certificate) plus VAT. and plus the procurement costs for the identification form. The implantation of a microchip is charged at € 11.44 plus VAT and additionally with the procurement costs for the transponder chip. These prices are prescribed minimum prices from 2008 and are adjusted accordingly over the course of inflation. In addition, a general examination according to the GOT of € 12.03 (dog) or € 8.02 (cat) will usually be carried out. A vaccination against rabies required for travel within the EU is charged according to the GOT at € 4.01 plus the cost of the vaccine.

Practical relevance and traveling with pets in the EU 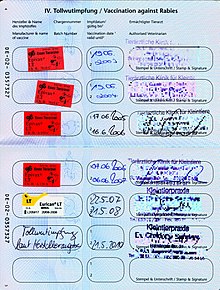 Since 2004, people who transport a pet dog, cat or ferret within the European Union across a national border have had to carry the blue EU pet passport with them, in which the health measures required for the respective animal at the time of travel must be documented.

The provisions also apply to the import of such animals into the European Union if the animal is imported from Switzerland, Norway, Iceland, Andorra, Liechtenstein, Monaco, San Marino and the Vatican. A corresponding proof of vaccination / ID in accordance with the applicable provisions must be carried with you, cf. Art. 10 para. 1 lit. e) in conjunction with Art. 26 Regulation 576/2013. In Switzerland, this is the pet passport of the Federal Food Safety and Veterinary Office .

The health measures to be documented in the EU pet passport generally require an effective vaccination against rabies (Art. 6 lit. b Regulation 576/2013) and possibly other health measures (Art. 6 lit c.) I. V. m. Art. 19 (1) of Regulation 576/2013), with which the Commission can react to unforeseen changes in the epidemic situation if necessary. For the movement of young animals ( puppies ) up to 16 weeks of age, the member states can also allow movement without effective protection against rabies under certain conditions (cf. Art. 7 and 11 Reg. 576/2013). A corresponding regulation was abolished in Germany on December 29, 2014. Since the animal must be at least 12 weeks old at the time of vaccination for effective vaccination protection and the effectiveness only exists after a further 3 weeks, this is in fact equivalent to an import ban for young animals under 16 weeks.

For other animals such as guinea pigs and hamsters there are no regulations to be observed when entering the country. The same rule applies to domestic rabbits , with one exception, that from 3 specimens, entry must be submitted to the veterinary office responsible at the recipient's place of residence . The following provisions apply to birds up to 5 specimens: Vaccinations against avian influenza must be available, 30-day quarantine at home , submission of an animal health certificate from the medical officer of the country of origin. If there are 3 specimens of birds in intra-European travel without the intention to sell, no regulations have to be observed. Parrots and parakeets that require an animal health certificate are excluded from this .