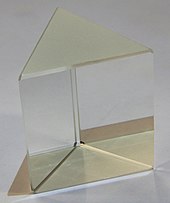 Prism with an equilateral triangle as a base 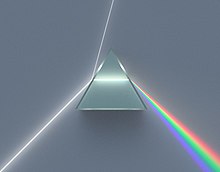 Under a prism is in the optical system is a component in the form of the geometric body prism understood, which is used for different optical effects such. B. as a dispersive (light fanning out according to wavelengths) element or to deflect a light beam. The shape is often a straight prism with a triangle as its base . The optical properties of a prism essentially depend on the triangular angles or the position of the optically effective prism surfaces relative to one another and on the refractive index of the material (e.g. glass or transparent plastic ).

The main applications of the prism are typically based on either its characteristic light wavelength dependent to break - that is then " dispersion " - or it to deflect light beams by reflection at one or more surfaces, for example in the viewfinder of a SLR camera . Both total reflection and directed reflection on metal-coated prism surfaces are used. 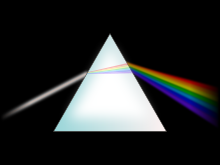 If the light wavelength-dependent (dispersive) behavior of the material of a prism is used, it is called a dispersion prism. You will e.g. B. used in prism spectrometers . The light falls obliquely on a side surface of the prism, in the simplest case on a prism in the form of an isosceles triangle. Due to the oblique (at least not perpendicular) incidence and the wavelength-dependent refractive index, the incident light beam is refracted into the prism at a different angle depending on the wavelength. This effect intensifies again at the exit surface of the prism, where the split light beam hits at different angles of incidence. If the light falls on a screen, the spectrum of the light source becomes visible. The common edge of the two surfaces involved (in the diagram above) is called the deflecting or refracting edge , with respect to which the light is deflected in the opposite direction.

n = refractive index of the material for the monochromatic light used

= Angle between the two breaking edges

Prisms, the application of which is based on the effect of total reflection, are used for the low-loss deflection of light. They are called deflection prism or reflection prism . The simplest example of a deflecting prism is a prism with the base of an isosceles, right-angled triangle. Here, the two perpendicular surfaces form the entry and exit surfaces. The third surface serves as a reflection or deflection surface on which incident light which is totally reflected at an angle that is greater than the critical angle of total reflection, that is to say without reflection losses. In order to achieve the highest possible degree of transmission for the entire beam path, the light is guided perpendicularly onto the entrance surface. In this case, the transmittance for unpolarized light is maximum and one avoids splitting the light depending on the wavelength or the polarization, because light incident perpendicularly on an interface is not refracted. Simple deflecting prisms are used in optical instruments specifically for light guidance, for example for the low-loss deflection of a laser beam in FTIR spectrometers .

If you combine two deflecting prisms, the mirror image effect of a single reflection can be reversed and an image is erected in this way. Such systems, also referred to as inverting prisms , are used, for example, in prism binoculars . The pentaprism , with a pentagon as a base, is in principle such a combination of two triangular deflecting prisms. It is used for 90 ° deflection, whereby the image remains the correct way round. In the case of the pentagonal prism , one of the four reflective surfaces has been replaced by two mutually perpendicular surfaces, which mirror the image. It is used in single-lens reflex cameras to correct the inverted image through their mirror.

The advantages of a totally reflecting deflecting prism compared to a mirror arrangement are, among other things, the immutability of the reflecting surfaces, the compact design and the higher degree of transmittance with multiple reflections. The transmittance of a pentaprism is significantly higher than that of a penta mirror , because with a prism only reflection losses occur here when entering and exiting (with glass approx. 4% each), which can be further reduced with appropriate anti-reflective layers . The reflection losses in the case of a metallic surface, on the other hand, are approx. 6 to 10%, which leads to significantly lower degrees of transmission of the arrangement even with two reflections.

Polarization prisms are suitable for separating light into parts of different polarization. Their functionality is based on the birefringence property of the prism material used. In contrast to dispersion prisms, it is not the dependence of the refractive index on the wavelength that is used, but its dependence on the polarization of the light. This means that incident light is refracted to different degrees depending on the polarization, and the beam components diverge in the prism. Primarily, it is not the position of the interfaces to one another, but rather the position of the interfaces to the optical axis of the birefringent material used that determines the properties of the polarization prism . To reinforce this splitting or selection of the polarization , a combination of two differently oriented partial prisms is usually used, which are often glued together, the glue (like Canada balsam ) also having an optical purpose. Often they are joined together on a surface that is inclined to the original direction of the beam. Due to the oblique incidence and the different refractive index, a selection can be made, for example, via total reflection .

One of the most famous polarization prisms is the Nicol prism . Variants are the Glan-Thompson prism and the Glan-Taylor prism .

The unit prism diopter ( unit symbol pdptr ) was previously used as a measure of the strength of a prism . It is defined by the deflection angle α with .

Today it still appears occasionally in ophthalmology. It is defined by the degree of deflection of a light beam measured in centimeters at a distance of one meter (cm / m). Accordingly, 1 pdptr is the deflection of a light beam by 1 cm at a distance of 1 m. Only the unit centimeter per meter (cm / m) should be used to describe prismatic effects (1 pdptr = 1 cm / m).