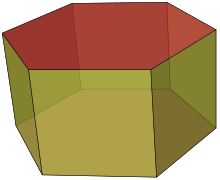 A prism with a hexagon as a base

A prism (plural: prisms ) is a geometric body defined by parallel displacement of a planar polygon along a not in this plane lying straight line in the space is formed. One also speaks of an extrusion of the polygon. A prism is therefore a special polyhedron .

A: straight prism; B: oblique prism

Special case of a crooked prism: parallelepiped , here even a rhombohedron

The body, which is dual to a straight prism, is a double pyramid .

The cuboids and cubes are special forms of the prism . With these, each side can be understood as the base of the prism.

In optics , a prism is usually understood to be a straight prism with a triangle as its base, see prism (optics) .

In mathematics, the prism is a special case of the general cylinder .

The volume of a prism is given by

where denotes the area of the base and the height of the prism. From Cavalieri's principle it follows that two prisms (e.g. a straight and an oblique prism) have the same volume with the same base area and height .

The lateral surface of a straight prism is given by

where stands for the circumference of the base and the height of the prism.

The entire surface of a prism results from

where and correspond to the content of the base area and the lateral area .

Only right prisms with a base which has a radius has to have a circumscribed sphere . All regular prisms and all straight triangular prisms therefore have a sphere. The radius of the sphere with a given height and given circumferential radius is calculated according to the Pythagorean theorem :

Both straight and inclined prisms can have an inc sphere .

With a given height of a prism, the radius of the inc sphere results in:

Precondition for the existence of an inc sphere :

Only straight prisms with a regular polygon as a base and all edges of the same length have an edge sphere . The jacket of such prisms is thus formed from squares . With a given circumferential radius , the radius of the edge sphere results in: