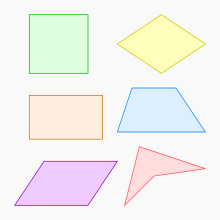 Some types of rectangles

A quadrilateral (also tetragon , Quadrangel or Quadrilateral ) is a figure of the planar geometry , namely a polygon with four corners and four sides. Analogous to triangles, it is also possible to generalize the term quadrangle to non-Euclidean geometries ( curved quadrilaterals). In the projective geometry play full squares and its dual full four-page an important role. In finite geometry , the incidence properties of the quadrangle are used to define the term " generalized quadrilateral ".

Hierarchy of the squares

A square has two diagonals . If both diagonals lie inside the square, the square is convex , if exactly one diagonal lies outside, the square has a concave corner . The square is the simplest polygon that can be concave. In the case of an overturned square, both diagonals lie outside the square, for example in the case of the crossed trapezoid . Overturned quadrilaterals are generalized polygons and are normally not counted as quadrilaterals. The same applies to degenerate quadrilaterals in which two or more corner points coincide or more than two corner points lie on a straight line .

The sum of the interior angles in the square is 360 °, because each square can be divided into two triangles .

In the dragon square (deltoid) the diagonals are perpendicular to each other, and one diagonal is bisected by the other. This is equivalent to having two pairs of adjacent sides, each of the same length. If there are four equally long sides, one speaks of a rhombus . A square is a diamond with four interior angles of equal size .

The flat quadrilaterals are classified according to different aspects:

The most important properties of the special squares are shown in the following table :

to be discribed. The four interior angles are an example of non-independent variables , because the fourth interior angle can be calculated from the other three and the sum of the interior angles of 360 °. If non-convex quadrilaterals are also allowed, there are ambiguous combinations, e.g. B. four sides and an interior angle as the side opposite the given angle corner may be convex or concave.

If there is a special square, fewer sizes are sufficient to describe its shape:

For a convex quadrilateral with sides , , , , the diagonal , and the area of the following apply inequalities :

with equality only for rectangles

with equality only for squares

with equality only for squares

with equality only for rectangles

if the tie with only diagonal orthogonal are

From the formula of Bretschneider follows with the inequality

with equality only for quadrilaterals

Center of gravity in a square
The dotted lines, the point and the centers of gravity and are not required for the alternative solution, they are only used for clarification, e.g. B. the parallelism of the half-line to the diagonal. See animation here

In point symmetrical squares, the parallelograms , which is focusing the center of symmetry , so the diagonal intersection.

In general, one has to distinguish between the corner's center of gravity (all mass sits in the corners , every corner has the same mass) and the centroid (the mass is evenly distributed over the area of the square). In the case of the triangle, these two focal points coincide. There is also the edge center of gravity (the mass is evenly distributed over the edges, the mass of each edge is proportional to its length). However, the edge centroid is rarely considered. Even in the case of the triangle, it does not match the center of gravity of the area and the corner, but instead corresponds to the inscribed center of the central triangle .

The straight line through the two triangular centers of gravity is a center of gravity of both triangles and thus also of the square. So the focus must be on this straight line.

The illustration opposite, constructed similar to that described above, also includes an alternative procedure. For this purpose, the centers of gravity and are to be determined in two intersecting triangles . Finally, a half line is drawn from parallel to the diagonal and a half line from parallel to the diagonal . Thus, the intersection of the two half-lines is the center of the area of the square. This means the dotted lines, the point and the focal points and are not required for the alternative procedure.