Lead-glazed window with a Venn diagram in Cambridge, England, where John Venns studied

Set charts can help illustrate relationships between sets, but are generally not useful as mathematical evidence . Only set diagrams that represent all possible relations of the sets represented are suitable as evidence ; such diagrams are called Venn diagrams. The disadvantage of Venn diagrams is that if there are more than three sets involved, they quickly become confusing because with n objects they have to represent 2 n possibilities. Venn himself could represent up to four, eventually even five, involved sets using ellipses.

Euler diagrams are primarily used to make set-theoretical facts, for example the subset property, clear. The following illustrations are common.

Further examples of Euler diagrams are:

Venn diagrams are best known for showing three sets with circles. Venn, however, had the ambition to find “elegant symmetrical figures” that represent a larger number of sets, and he showed a diagram for four sets in the form of an ellipse. He then gave a construction method with which one can display Venn diagrams for "any" number of sets, with each closed curve intertwined with the others, starting from the diagram with three circles. A “hose” is drawn over the last quantity display. This cuts all other quantities.

Differences between Venn and Euler diagrams

The difference between the two types of set diagrams becomes particularly clear if you look at both diagrams for a specific example. Take the following three quantities.

The Euler and Venn diagrams of these three sets look like this.

While Euler diagrams only show the actual overlap between the quantities, Venn diagrams show all possible overlaps of the surfaces (even if they do not contain any objects).

Johnston diagrams are thus a mapping of classical propositional logic to elementary set theory, whereby the negation is represented as a complement, the conjunction as an intersection and the disjunction as a union . The truth values true and false are mapped to the universal set and the empty set, respectively.

Leibniz was already using set diagrams to represent syllogistics around 1690 . Christian Weise , rector of the grammar school in Zittau , used quantity diagrams around 1700 to represent logical connections. Johann Christian Lange (1669–1756) published the book Nucleus Logicae Weisianae in 1712 , in which Weise's logic is treated. Leonhard Euler , Swiss mathematician in the 18th century, introduced the Euler diagram, which he first used in a letter dated February 24, 1761.

John Venn , a British mathematician in the 19th century, introduced the Venn diagram in 1881. In 1964, works by Charles Sanders Peirce , which he wrote in the last quarter of the 19th century and which describe the existential graphs , are recognized for the first time .

The following graphics show how Venn diagrams have been used to illustrate syllogisms since the 17th century . The validity of a conclusion can be checked with this method. (So you can see, for example, that the Modus Darapti is only valid if there is a non-empty middle term.)

No element exists in black areas ( general statement ).
In red areas there is at least one element x ( existence statement ).

Such Venn diagrams can easily be converted into Euler diagrams, as the following graphic shows. Venn diagrams have the advantage that one cannot forget an overlap, so they are also suitable for evidence. In contrast, with Euler diagrams, it is more intuitive to grasp which quantities lie within one another or which overlap. 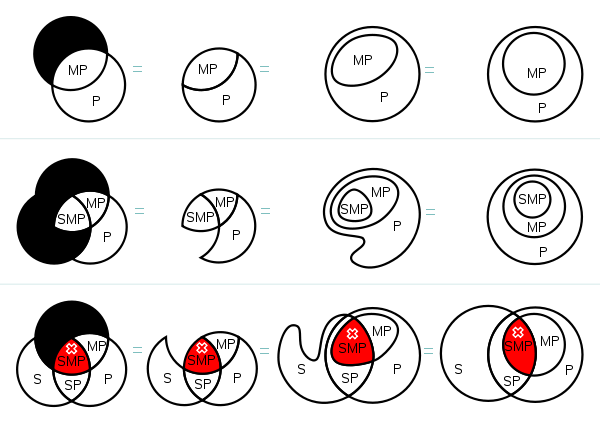