This article explains the basic biological need; for other meanings, see thirst (disambiguation) . 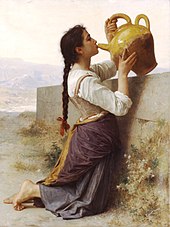 Thirst (from Old High German thirst , originally "dryness [in the throat]") is a signal from the healthy body that is felt when there is a fluid deficit or an excess of salt. It thus reports an existential need . As a rule, it is followed by the willingness to drink in order to satisfy the need. With adequate hydration, dehydration is prevented.

A person's daily fluid requirement depends on their volume balance . For adults, the daily requirement is between 2.25 and 2.7 liters, depending on age. Part of this is ingested through food. A daily intake of around 1.5 liters is currently recommended, but this can vary depending on individual conditions (weather conditions, physical exertion, etc.).

The body regularly loses fluids through normal excretory functions such as breathing, evaporation and sweating. With physical exertion, fever, certain illnesses or acute blood loss, the fluid loss increases accordingly. Thirst occurs when these losses are not adequately compensated, e.g. B. If there is a lack of fluid intake or if there is an excess of salt due to diet or illness. If the water content in the body drops by about 0.5%, this is registered in the brain (by osmoreceptors in the nucleus supraopticus of the hypothalamus ) and the desire for fluid is triggered. From a loss of around 10% fluid, less saliva is produced; there is a feeling of dryness in the mouth and speech disorders .

Further fluid loss is largely restricted by the production of antidiuretic hormone (ADH or vasopressin), as it - released in the neurohypophysis - increases water reabsorption in the kidneys . The kidneys also contain osmoreceptors that induce the renin-angiotensin-aldosterone system , which causes the adrenal cortex to release more of the hormone aldosterone . This also increases the water reabsorption through increased Na + reabsorption.

Thirst in the elderly

The body's own feeling of thirst decreases from the age of 50 with increasing age. This creates a higher risk of dehydration . Several studies have shown that older people have lower total water draws than younger adults, and this is particularly the case with women.

In 1999, the made-up word sitt was invented, which, analogously to sat , should denote the quenched thirst. However, it has not caught on in common parlance.