Functional scheme of a pentaprism

Functional diagram of a roof pentaprism

A pentaprism (also pentagonal prism ) is a five-sided optical prism . Two of the five surfaces are used as internal reflection surfaces . A light beam is usually deflected by 90 °. The entry and exit surfaces are hit vertically by the light passing through - as is usual with a reflection prism - in order to avoid color scattering due to the wavelength-dependent refraction of the light. The reflective surfaces are mirrored because the light falls too steeply on them for total reflection . Due to the double reflection, a transmitted image remains the right way round.

The general application is the redirection of light, whereby an image remains in the correct direction.

A pentaprism with non-mirrored surfaces can be used for solar observation . About 96% of the light leaves the prism at each reflecting surface, so that in the end only 0.16% of the original amount of light (and amount of heat) remains for observation. For visual observations, however, a light-attenuating filter ( neutral density filter or polarization filter ) must be added.

Roof-edge pentaprism in binoculars from 1905, fourth reflection on a half-cube prism to avoid mirror invertedness and to straighten the beam path 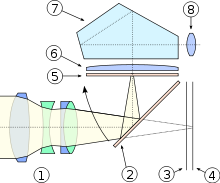 Roof prism (7) in the viewfinder of an SLR camera

A variant of the pentaprism is the roof prism (sometimes also roof prism for short ), which creates an upright but reversed image. Here, a mirror surface is replaced by two mutually perpendicular surfaces. These do not have to be mirrored, as total reflection can be used. The roof-prism pentaprism is often used in the viewfinder of reflex cameras ( pentaprism viewfinder ). Here you get a right-sided and upright image, because the image on the focusing screen of the camera is upright but reversed. For binoculars, for example, the roof pentaprism is used together with a 90 ° deflecting half-cube prism . In addition to the straightness, the fourth reflection ensures that the image is not reversed.

A special feature of the pentaprism is that the exit angle of the light beam is always 90 ° to the entry angle. The optical component is therefore invariant to disturbance variables (tilting of the prism).