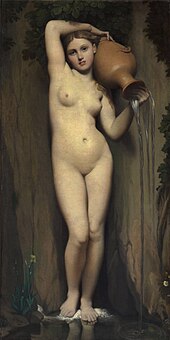 The term nude came up as a school term for portrait and genre painting in the 19th century and originally referred to a graphic study of the human body ( nude study ). Today it refers to all representations of naked human bodies, from the early days to contemporary art but also to the genres of eroticism and pornography . 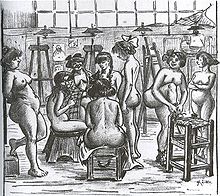 Heinrich Zille : Model break .
In addition the note: At the Maler's you must first learn to understand what they say. Want to be naked - then say: "Act", paint your breasts - then say: "Bust" - and want your back where it's pretty, then say "Kiste ". ( Simplicissimus , around 1925)

The term act is derived from the Latin actus "action". The Latin noun is a participle of agere "to set in motion" and therefore also means "to move". Originally, act meant a movement of the human body. In the fine arts it was understood as a study of posture and movement by the artist on a naked or clothed model to study anatomy, proportions, etc. In academic painting of the 19th century, the term was also understood as a representation of a gesture or posture or the corresponding posture of the model when moving from one movement to the next.

Since the Renaissance, the nude has been a customary, mostly graphic, work preparation in artist studios and academies. Since the naked human body is at the center of these studies, the term nude has expanded in meaning over time. Today it is used to describe any representation of the naked human body.

In order to emphasize the physicality of the person in the representation, the models were painted naked. To enable the exact reproduction (for example of the body proportions and the muscle play), the model had to remain immobile in one and the same position during the entire painting process, with support rods and hanging structures often serving to better fix the respective posture. The so-called croquis process was later developed , in which at first only sketchy drafts of the nude were drawn so that the model no longer had to stay in one position for more than half an hour. In the case of Auguste Rodin , the model was even included in the artistic design by allowing it to determine its positions itself. Only then was the term nude applied to any form of non-pornographic, artistic representation of an unclothed human body.

In the French language , the term Académie has also established itself as a term for a study or drawing of a nude. It originally comes from the Italian accademia for a society and university that dealt with painting and placed particular emphasis on academic body painting. The first academy of its kind, the Accademia delle Arti del Disegno , was founded in Florence in 1563 on the advice of Giorgio Vasari and, in line with the studies of Leonardo da Vinci , concentrated on the artistic exploration of perspectives and proportions of the body. Further art academies were founded in Rome ( Accademia di San Luca , 1577) and Bologna ( Accademia degli Incamminati , 1583). In Paris in 1648 the Académie royale de peinture et de sculpture was founded with the sole right to training with living models in France.

History of the Nude in Art

In the history of art , the nude is one of the oldest and most diverse genres . In early history it was used almost exclusively for cult purposes . It was only the Greeks who elevated it to an independent work of art, although the form of representation could have different intentions.

Undoubtedly, even in the Middle Ages, people worked from a nude model occasionally , but regularly not until the 15th century. During this time, male models were also generally used for the female nude. Exceptions occurred, however, as evidenced by the Eva of the Ghent Altarpiece by Jan van Eyck . In the Renaissance, too, nudes in finished works of art were initially only permitted for religious motifs, later also for those from ancient mythology (e.g. the Paris judgment ), and only if the depictions really required nudity . A famous example of the former is The Creation of Adam by Michelangelo in the Sistine Chapel . In addition, as can be seen in the last restoration of frescoes , the original work was often retouched later in order to hide an overly detailed view of the naked body. Leonardo da Vinci and Albrecht Dürer elevated studies of nudes (e.g. hands) to independent works of art. Female nude models also became more common in the 16th century, for example Bellini's Young Woman at the Toilet (1515) is considered the first Venetian female nude without biblical, mythological or moral references.

In the 19th century, nudes were generally freed from being restricted to religious, mythological or historical motifs. This is confirmed, for example, by the works of the French Impressionists, such as Renoir , Manet and Degas , who show people in completely normal situations (often in the great outdoors), concentrating on the details of their body language, and with them the inner world of the individual, his Express dreams, fears and hopes. The nudes as an expression of inner moods and feelings then reached its climax in Expressionism and its artistic developments in the 20th century.

To this day, the nude has not lost its explosiveness and relevance and has always had a great attraction for artists of all genres. Time and again, artists succeed in portraying the human body from a new perspective. To this day, artists have been exploring the limits of what is morally and aesthetically permissible and creating works of art that often initially meet with rejection.

Self-portrait as a nude

While male artists - including Albrecht Dürer - did not hesitate to choose their own body as a nude model, Paula Modersohn-Becker was the first painter at the beginning of the 20th century who dared to combine self-portrait and nude. Her self-portrait on the 6th wedding anniversary (1906) went down in art history as the first female self-nude. 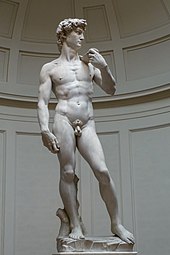 Michelangelo: David (in the Galleria dell 'Accademia , Florence), between 1501 and 1504 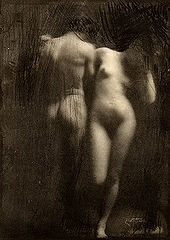